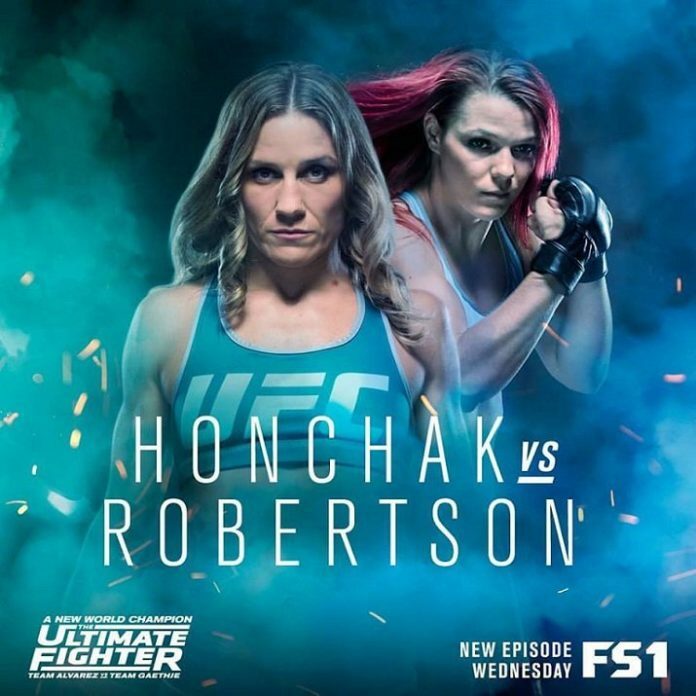 It’s time for episode six of The Ultimate Fighter Season 26! The original Invicta FC flyweight queenpin, Barb Honchak, squares off with youngest gun Gillian Robertson. This, the sixth preliminary bout, goes down as bits of negativity continue to gather around Eddie Alvarez and his crew. We’ll break that down as we look into this latest installment of Team Gaethje versus Team Alvarez.

#1) OG Science Pirate – So, “The Little Axe” Barb Honchak definitely has an interesting life. Holding a masters degree in environmental genetics, the arguable top flyweight in the world lives on the Washington coast, fixing up a large sailboat with hopes of sailing it around the world. Why is she not in the Dos Equis commercials as the most interesting woman in the world?

#2) Geography of the Bruise – in a somewhat humorous aside back at the TUF House, Rachael Ostovich complained about a rather large bruise on her breast. Upon visual inspection, her teammates began comparing it to continents. This led to Montana Stewart grabbing a globe for comparison. This was definitely an odd exchange.

#3) Injury Time – Melinda Fabian of Team Alvarez has sunk into a bit of a depression. A nagging hamstring injury has her worrying about her place in the competition. After a visit to the UFC Performance Institute for treatment, it seems like there may be improvement. “May” being the operative word, of course.

Stock Up – Barb Honchack. After a two year lay-off, “The Little Axe” came back with a solid performance. While there was doubt about how she would perform, it seemed to take her only one round to shake off the cage rust and get back to it. This bodes well for a potential rematch against Roxanne Modafferi in the finals.

While Gillian Robertson was certainly gutsy, and did her best to listen to her coach Justin Gaethje, she just wasn’t a match for Barb Honchack. Her best offense was an armbar attempt in the first round, but it was for naught. When Robertson attempted a juji-roll to transition the armbar from a guard to a cross-side type position, Honchak simply walked along the wall of the cage to ensure she stayed on top and broke free of the submission. Really, the best way to describe “The LIitle Axe” in this fight is to compare her to a belt sander. She was constantly ripping away at the young Floridian, shredding her bit by bit until the referee stopped the fight in the second round. Barb Honchak will now be moving on to the semi-finals.

Next episode, Rachael Ostovich (#10) of Team Geathje will step into the cage with Team Alvarez’ Melinda Fabian (#7) in the seventh preliminary bout. Will Fabian be able to get her head and her body back on track? We’ll have to wait and see. Keep it locked to MMASucka.com for more news, opinion, and the latest edition of the TUFtermath!