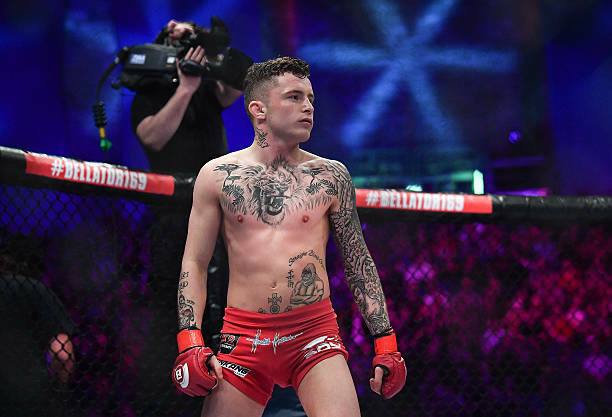 As originally reported by Ariel Helwani for MMAFighting.com, Ireland’s own James Gallagher has been taken out of the main event of Bellator 187 due to a knee injury. The injury was sustained while training.

Gallagher was scheduled to face Jeremiah Labiano in featherweight action at the upcoming event. Labiano will be moved to the Bellator 188 card against a to be named opponent. It has also been announced that this fight will be replaced in its main card slot by a fight between division rivals A.J. McKee and Brian Moore. McKee was originally scheduled to fight Jeremy Petley, but has moved up the card to replace Gallagher instead. Moore was scheduled to fight Andre Goncalves. Goncalves will now face Irishman Decky Dalton. It is not yet clear if Petley will still fight on the card or be re-booked at a later date.

Assuming this is McKee’s last fight of the year, he will be looking to end this year with a perfect 4-0 record. He fought at Bellator 171, 178 and 182. The first of his three wins came by decision against Brandon Phillips. The second win was a knockout victory against Dominic Mazzotta. His third win of 2017 was also a decision, this time against Blair Tugman. McKee’s career record is a perfect 9-0.

Brian Moore, who fights out of the same association as James Gallagher, has had a much more relaxed year. He has only fought once so far, picking up a win against Michal Horejsi via TKO at Bellator 177. Moore has a career record of 10-5, and is looking to improve his 2017 record to 2-0 after this fight.

Bellator 187 will take place just a three-hour drive from Strabane, Gallagher’s hometown. It is scheduled for the 3Arena in Dublin. An unnamed source told MMAFighting that Gallagher will be out for “6-8 weeks”, making him miss this hometown show.