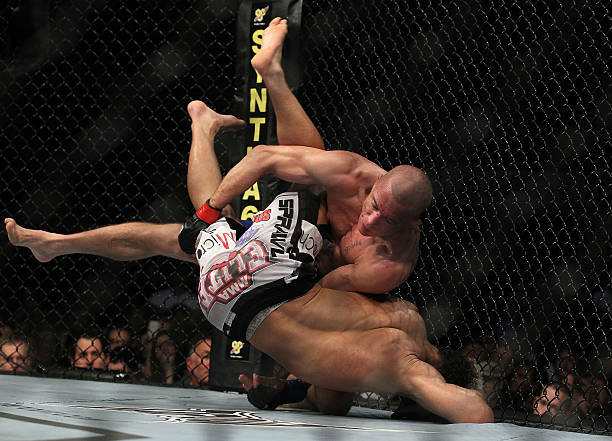 If you ask any MMA fan about wrestling, it probably won’t be long before Georges St-Pierre enters the conversation. Despite having no collegiate experience, St-Pierre famously out-wrestled such accomplished wrestlers as NCAA Division I Champion Josh Koscehck, and two-time NCAA All-American Matt Hughes.  What made St-Pierre’s wrestling special, even among the elite in MMA, wasn’t just the technical soundness of his takedowns, but the way he was able to systematize his wrestling and seamlessly blend it with his striking game.

Setting up a takedown is a much different affair in MMA than it in pure wrestling. Whereas wrestlers will fight their opponent’s hands in order to achieve a tie, MMA fighters have to navigate their opponent’s strikes. In amateur wrestling, routes onto the hips can be created by stripping a post, but the nature of striking in MMA means that distances between opponents are longer and hands are generally kept tighter to the body. Reliable takedown setups in MMA typically fall into two categories: control ties and timing.

The wrestling, takedowns, and setups of GSP

St-Pierre used an underhook (typically on his left side) to hit knee taps and throws from positions of control in the clinch, but the majority of his takedown setups utilized a timing-based approach. St-Pierre excelled at hitting reactive takedowns, shooting when his opponents opened themselves up to attack.

Because the distance between fighters is typically longer in MMA than in grappling sports, shooting outright can be difficult. Timing an opponent’s attack removes this complication by meeting them in the middle as they close distance themselves. Reactive takedowns also make it difficult for the opponent to begin defending immediately, as their hands are usually occupied by their attack.

It’s important for any good wrestler to have tactics for drawing out reactions, so that he can hit these takedowns without relying on his opponent to provide the opening. “GSP” excelled in this department. He was constantly feinting his jab by flicking it out halfway at the shoulder, or taking stutter-steps with his feet. Opponents who tried to counter the jab often found themselves walking onto a takedown, while those who reacted by pulling or covering up found themselves bowled over by an explosive double leg.

Opponents who tried to counter the jab often found themselves walking onto a takedown, while those who reacted by pulling or covering up found themselves bowled over by an explosive double leg.

His feints worked the other way too, with level changes setting up jabs to the body and head. By the time he had his opponents conditioned with feints and real strikes, they wouldn’t know whether to expect a jab, a feint, or a takedown at any moment.

The principle behind chain wrestling is similar to that of combination striking–chaining attempts together increases the odds that one will be successful. When you throw a jab, your opponent will often bring his hand out to parry it, creating an opening for the lead hook to slide in behind his parry. Chaining takedowns together works in a similar way, with each subsequent attempt building on and taking advantage of openings created by the previous one.

The double leg/knee tap and high crotch/double leg were St-Pierre’s primary takedown pairings. When you shoot a double leg and your opponent is unable to avoid it outright with distance or footwork, their next step is usually attempting to catch an underhook. This goes doubly for strikers, who generally prefer to keep the fight on the feet and avoid sprawling, and inviting a grappling exchange, if possible. An underhook allows them to kill the momentum of a double leg by pulling the near arm up and off their hip.

However, pulling up with the underhook straightens their posture and exposes them to the knee tap. The high crotch and double leg work in a similar manner. Running the pipe for the high crotch prompts opponents to resist and struggle against it, leaving the opening to turn the corner with a double leg or a lift.

Typically we think of a shot that doesn’t result in a finished takedown as failed, but St-Pierre excelled in transitions and at using “failed” shots to his benefit. Whenever his takedown was stuffed, St-Pierre would look to land strikes off the break, use the connection with his opponent to establish control ties in the clinch, or push them to the cage. His reactive takedowns constantly made opponents wary of stepping in and committing to punches. Even when they were being stuffed, the threat of St-Pierre’s takedowns had a tangible presence in his fights.

Along with his excellent offensive wrestling and unparalleled ability to blend his takedowns with strikes, St-Pierre possessed superb defensive wrestling as well. He boasted an impressive 83% takedown defense in a wrestler-heavy division, and was only taken down by two men in his lengthy reign as welterweight champion.

The film study below explores all these topics and more in greater depth:

St-Pierre returns to the Octagon for the first time in four years at UFC 217, where he will face middleweight champion Michael Bisping. There’s no telling how St-Pierre will look after four years of retirement and a move to a new division, but he will undoubtedly look to use his mastery of wrestling to conquer the Middleweight crown.