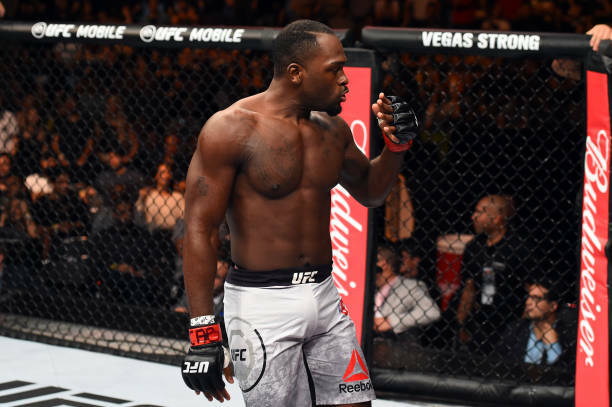 UFC Fight Night 119 went down last night at the Ibirapuera Gymnasium in Sao Paulo, Brazil, and what a great night of action it was.

On paper, it was a pretty excellent card for a free show, but that’s come to be expected with UFC shows held in Brazil. But sometimes those types of shows do not deliver, and UFC Fight Night 119 was not one of those times.

On a night with so many solid performances, how do you pinpoint only five of them? Well, it’s not easy. But I tried. Here are five of the standout performances from the show.

def. Lyoto Machida via KO in Round 1

Prior to 2015, it was known that Brunson was capable of knockouts, but it was not exactly something that was expected from him. He was primarily known as a wrestler. Well, since January of 2015, he is a very impressive 6-2 with all 6 of those victories being via devastating first-round knockout.

The middleweight contender rebounded from the losing streak by stopping Dan Kelly in just 76-seconds four months after losing to Silva. And last night, another four months later, Brunson had his chance to take on another legendary Brazilian in the form of a returning Lyoto “The Dragon” Machida.

Halfway through the opening round, Brunson forced the usually defensive Machida to play the offensive game. And as Machida came in, Brunson landed that now infamous left-hand right on the chin to drop the Brazilian. He put a stamp on the performance by rendering Machida unconscious with the follow-up blows.

WATCH FOR THE HOOK! Derek Brunson finishes Lyoto Machida early in round one! #UFCSP https://t.co/JEiQckDhsG

The impressive showing earned him a performance of the night bonus, and he used his mic time post-fight to call out former middleweight champion Luke Rockhold.

def. Niko Price via Submission in Round 2

After an unsuccessful UFC debut in mid-2016, Luque quietly went on a very nice four-fight finish streak in the 11-month period between December of 2015 and November of 2016.

He lost a decision to Leon Edwards early this year after two devastating knockout wins to close out 2016.

In his first fight since the disappointing setback in March, Luque took on the undefeated Niko Price at UFC Fight Night 119 on just 11-days’ notice.

Entering the night, Niko Price held an impressive 10-0 record and had looked absolutely lethal since joining the UFC late last year, recently knocking out Alan Jouban. The former Fight Time title-holder was originally scheduled to fight another Brazilian on the night in the form of Luan Chagas.

Despite the late notice fight, Vicente Luque looked fantastic. He had Price hurt multiple times on the feet, even showing off some very impressive leg kicks, before hurting him in round two and locking in the devastating d’arce choke, forcing a quick tap from Price.

Luque is now an impressive 5-1 in his last 6 outings and there is a serious argument for him deserving ranked opposition next.

The 25-year-old Blackzilian has showcased some impressive striking backed by some fantastic knockout power, as well as a world-class ground game that can present problems for anyone.

Yes, his opposition was not ranked. But entering UFC Fight Night 119, there were some questions that needed to be answered regarding John Lineker.

Known for his ultra-aggressive style, some had to wonder whether or not that was going to change coming into last night. In his most recent outing, Lineker broke his jaw against former bantamweight champion TJ Dillashaw.

Injuries like that can change a fighter, especially when your style is as aggressive as Lineker’s.

After starting out slower than expected, Lineker wasted no time in showing the world that he is back, and he is just as exciting and vicious as he was before. He swarmed Vera multiple times throughout and mixed it up with his signature body/head hook combinations.

The Brazilian also showed off his ridiculous chin at certain points as he ate a heel kick from Vera and responded by smiling and pressing forward. He even showcased a very nasty ground-and-pound game briefly at one point.

Big GnP from @JohnLineker to end round 2!

It was great to see John Lineker back successfully defending that #5 rank. Speaking of ranks, how about Marlon Vera? He came into the contest unranked and appears to have a skill set worth of the top 10-15.

def. Rob Font via Submission in Round 1

In the battle of #12 vs. #13, bantamweights Pedro Munhoz and Rob Font were the picks of many to put on the best fight of the night at UFC Fight Night 119.

It didn’t quite deliver on that front, but it did present the winner with a performance of the night bonus.

Late in round one, Munhoz dropped Font and wasted no time at all in grabbing a hold of the neck and synching in that guillotine choke. Font was given no choice but to tap, and referee Mario Yamasaki stopped the fight.

A very nice one-armed guillotine choke for the Brazilian as he becomes the first man to finish Rob Font.

WHAT A MOVE! Pedro Munhoz gets the submission win with a guillotine from the top position! #UFCSP https://t.co/TdV3BV7Xz6

This was the fourth win in a row for #12 ranked Munhoz, who continues to prove he is one of the biggest submission threats at 135 pounds.

Covington entered the fight after insane amounts of trash talk, and the question on everyone’s mind was; will he back it up? The answer: kind of.

It was fourteen minutes of striking between two very elite grapplers. Maia is one of the most dangerous BJJ threats the sport has ever seen, and Covington’s high-level wrestling background is absolutely nothing to scoff at.

Maia came out of the gate in round one and was seemingly more than happy to strike. He even seemed to land the more significant shots early. However, the volume/output advantage was in Covington’s favor the entire fight.

It was beginning to become a surprisingly entertaining scrap until Maia completely gassed himself out. To Covington’s credit, he continued to push the pace. The punches were plentiful, but they were not pretty. Maia began to look for the takedown, but rather than working from the clinch like he has done so excellently in the past, or even pulling guard, he was shooting single legs from six feet away unsuccessfully.

After avoiding going to the ground with Maia throughout, very late in the final round, Covington sprawled another takedown attempted by Maia and used it to land some very nice ground-and-pound. The American was able to bloody the Brazilian up in what was a bit of payback for Maia busting him open early.

Covington won the fight, deservedly so, and what a massive win it was. The only issue is; I’m not quite sure it was as impressive as Covington thinks it is.

Take nothing away from Colby Covington. It was a huge win for him as he inches closer to his desired title shot.

It would feel bad to not at least mention some of the other incredible showings from the event. The war between Elizeu Zaleski and Max Griffin, the vicious KO by Thiago Santos, the excellent performance by 39-year-old Francisco Trinaldo.

There were some amazing performances on this show, and if you have not yet watched; I can’t recommend it enough. If you don’t have 6+ hours to spare, check out the results here!