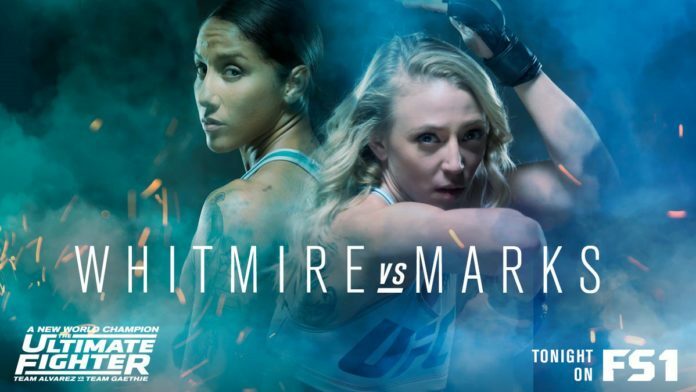 After a week’s delay for baseball playoffs, The Ultimate Fighter Season 26 is back with episode eight! Things finally hit the breaking point between Lauren Murphy and Eddie Alvarez, with the good of Team Alvarez hanging in the balance. Also, Team Gaethje‘s Emily Whitmire steps into the cage against Christina Marks of Team Alvarez in the final preliminary bout. All this, plus the coaches challenge! So, let’s get started

#1) You Better Swim – Head coaches Justin Gaethje and Eddie Alvarez squared off in this season’s coaching challenge, an 800-meter swim. While Gaethje took an early lead, he quickly gassed out, allowing Eddie Alvarez to come from behind and take the victory, $10,000 for himself, and an additional $1700 for each of his team members.

#2) It All Comes to a Head – While Eddie Alvarez focuses on preparing his team members for their bouts, his failure to connect with Lauren Murphy has created a toxic situation. It all came to a head this episode when Murphy made it known to her team, and to Alvarez, that she wanted to spend the rest of her time on the show training with Team Gaethje. Justin Gaethje was quite happy with this development. Eddie Alvarez, however, felt extremely disrespected. “I felt like a cancer was cut out,” he said, in the aftermath. How it affects the team will remain to be seen, but it does reduce drama in the short term

#3) The Struggle of Emily Whitmire – The only person on this season of TUF who comes close to living the kind of hard life that Lauren Murphy has is Team Gaethje’s, Emily Whitmire. Raised by her widowed mother up until the age of 15, she then struck out on her own. Bouncing around trying to find the direction she lacked while living with her mother, Whitmire eventually found MMA after a chance encounter grappling against TUF 20 veteran Lisa Ellis on a small card at a local nightclub. Eventually, she managed to connect with Miesha Tate and moved from Washington State out to Xtreme Couture in Las Vegas. Definitely one of the crazier stories on the show.

Stock Up – Emily Whitmire: I don’t think anybody expected Whitmire, who came into this bout with a rib injury, to do quite as well as she did. It was an exceptionally dominant victory

There wasn’t much to this fight. Emily Whitmire through a punch used it to conceal her takedown entry, and from there, Christina Marks didn’t really have a defense. Whitmire took Marks’ back over-enthusiastically, fell over the top, and landed by catching an armbar that would eventually gain her the submission victory at around the 40-second mark. With that, Emily Whitmire moves on to the quarterfinals.

Next episode, teammates will collide as Team Gaethje’s Roxanne Modafferi (#1) takes on Emily Whitmire (#8) in the week’s first fight, while Team Alvarez’ Sijara Eubanks (#12) throws down with DeAnna Bennet (#4). Keep it locked to MMASucka.com for more news, opinion, and the latest edition of the TUFtermath!