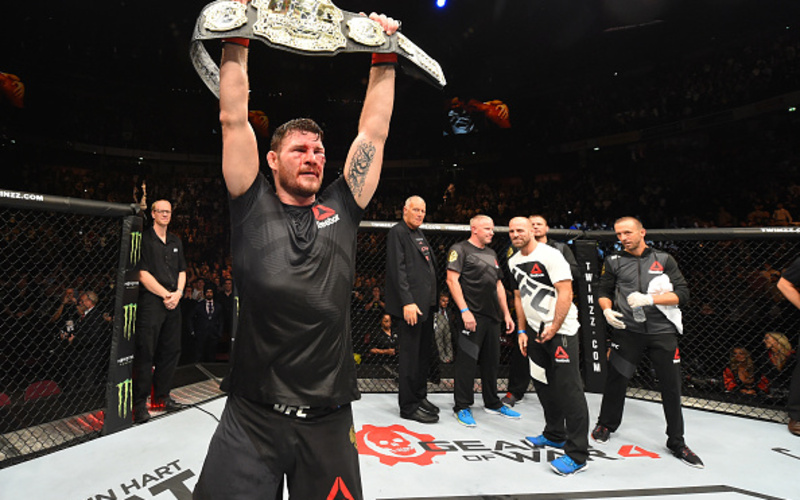 UFC 217 is upon us this week, and being sold on the return of George St-Pierre. However, an important theme running throughout the card is that of “will this fighter get their comeuppance?” Before we go much further, I feel it’s best to set the mood, so hit play on that little Spotify embed below this paragraph before you go keep reading.

That’s right, we’re going to talk about the jerks of UFC 217. There’s actually three different categories of jerks, and each one finds representation on this card. There is your Category 1 Jerk, the kind who can somehow remain likeable even when they’re being a bit of bully. You can cheer for them and not feel bad about it. There’s Category 2, which is populated by those who are generally unlikeable, but not quite completely hateable. You want them to lose to knock their egos down a peg. Finally, there’s Category 3, which is comprised of people best described as human trashfires. They’re the people you want to see receive a beating best described as “karmic.”

While trying to figure out who falls where may be tough, it helps to look at the following criteria:

If a fighter seems natural but playful in their antagonisms, sticks to the facts when talking about their opponents, keeps violence in the cage, and doesn’t generally go beyond the bounds of civil society, they fall into Category 1. If a fighter’s persona seems at all forced, or if their antagonisms edge into maliciousness, if they are repeatedly involved in pull-aparts at press events, have abused their opposition’s corner staff, or occasionally lapsed into the use blatant racist, homophobic or gendered insults, they fall into Category 2. Finally, if a fighter – either naturally or forced – crosses over fully into malicious antagonism, repeatedly breaks accepted norms of behaviour, attempts or succeeds in physically assaulting people outside the cage or gym on multiple occassions, makes increasingly crazy claims about their opponents, and relies on using racist, homophobic, or gendered insults, they fall into Category 3.

The best example of a Category 1 Jerk competing at UFC 217 is Joanna Jedrzejczyk. She is utterly charming, and violent in absolutely heart-snatching way. However, you have to admit that she is a jerk to her opponents. Whether it’s the snide weight-in gifts, or picking at them at pre-fight events, Joanna “Champion” does what she has to do in order to get under the skin of her opponents. The way she does it, though, with a smile and a wink to the crowd, is strangely endearing. You know she’s being mean, but people love her all the more for it. Another example is the brash Mickey Gall. He is unafraid of antagonizing his way into a fight, and does so in a way that gets you on his side.

The ultimate example of a Category 2 Jerk, one who you don’t like but that you don’t hate either, is Michael “The Count” Bisping. This is a man who has made no qualms about running down his opposition anyway he can – including the occassional use of homophobic slurs, finagled his way back into fights after he should well have lost, and even spat on an opponent’s cornerman. When you put all that together, he seems like an irredeemable dick. Yet on the flip side, he’s also a devoted family man and a competent analyst so you can’t hate him either. You want him to lose so he gets knocked down a peg, but not necessarily be beaten to the point he looks like Sloth from The Goonies. Another example of this would be notorious weight-misser Johny Hendricks. While he would normally fall into Category 1, his increasingly erratic behaviour- including threatening media by telling them not to write anything negative because, “I know where you live.” – puts him into Category 2.

If there is a Category 3 Jerk at UFC 217, it’s Cody Garbrandt. Despite his friendship with young cancer survivor Maddux Maple, he’s fast pissed away that good well thanks to his performance on The Ultimate Fighter 25. Making multiple attempts to assault his UFC 217 opponent TJ Dillashaw during their season of TUF, relying on gendered insults, boasting about KOing Dillashaw in training and releasing footage of a sparring knockdown  (a major breach of accepted gym ettiquette/trust), and the increasingly bizarre claims (“TJ showed us all how to use PEDs!”), and the overall malicious tack he’s taken plants the UFC Bantamweight Champion squarely in Category 3.

It is certainly true that there are no angels competing at UFC 217. It is important, however, to know just where some people fall on a scale of objectionable behaviour. This is as true in supporting your favorites fighters as it is in every other social facet of your life. Now, as with all things, your results my vary. You may see things differently, and that’s to be expected. However, I hope that you will now look at things from a new perspective as well. You may view things in a whole new light.

Keep it locked to MMASucka.com for more MMA news and opinion!