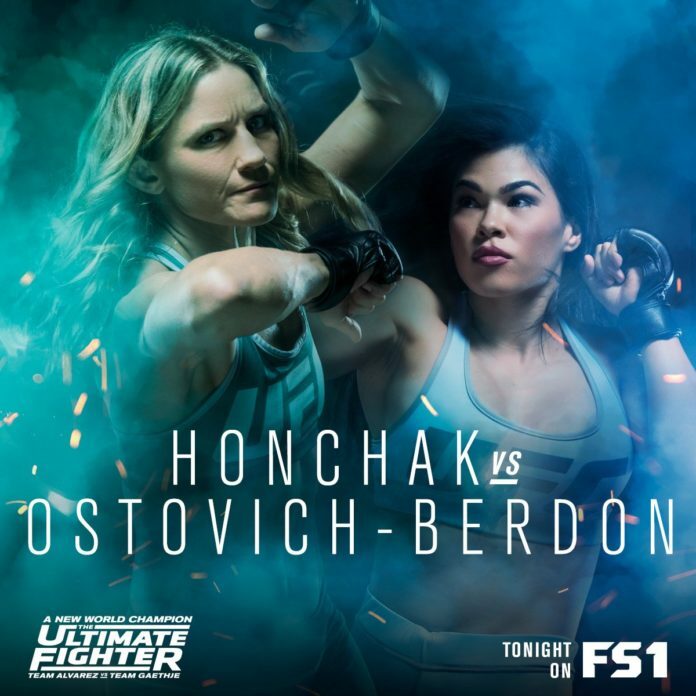 Tonight is the tenth episode for The Ultimate Fighter’s 26th season, and the end of the quarterfinals! This is another TUF 26 double-stack, with the final two quarterfinal fights going down. Former Invicta FC champion Barb Honchak of Team Alvarez takes on Team Gaethje’s Rachael Ostovich-Berdon, while Nico Montano and Montana Stewart throw down for the last semifinal spot. We’ll look at both the fights and all the happenings this week with the TUFtermath!

#1) When It All Comes Crashing – Defeat is never easy to deal with, both for fighter and coach. Especially the fighter, though. That was made clear once again as Rachel Ostovich-Berdon shown, completely shattered, following her defeat at the hands of Barb Honchak. Coach Justin Gaethje did his best to console her, but was unable to do so. Just another stark look at the realities of the sport.

#2) The Bleeding – I can’t recall the last time I saw a fight this bloody this early on a TUF season. Nico Montano had Montana Stewart painting the mat red during the second round. It was nuts.

#3)  Keeping it Semi-legal – One more note about Nico Montano, but during the second round of her fight with Montana Stewart, she was doing everything she could to grind her foe down. That included literally grinding her forearm down on Stewart’s face. Is it dirty? Possibly. Do I approve? Oh yeah.

Stock Up – Eddie Alvarez. During Barb Honchak’s victory over, one thing could be heard calling out sound, simple tactics. That was Eddie Alvarez. After his issues with Lauren Murphy, it helps his image to be shown as such an effective cornerman.
Stock Up – Nico Montano. While she faces the biggest test of her career in her coming semi-final bout with Barb Honchak, Montano has twice now risen to the occasion as the underdog. Will she be able to do so again?

The first round of Barb Honchak vs. Rachel Ostovich-Berdon was probably closer than some expected. At least in the beginning. While Ostovich-Berdon’s power was a factor, it was nullified by Honchak’s superior technique. As the round progressed, however, Honchak’s grappling started to take over. The Hawaiian’s own wrestling was effectively cancelled out, and “The Little Axe” was able to execute a couple of takedowns as well. I, personally, scored the round 10-9 for Barb Honchak. The second round started similarly to the first, with Ostovich landing a couple of hard right hands. Around the mid-point of the round, however, Honchak secured a takedown against the cage and took control. The former Invicta queenpin proceeded to dominate her opponent with vicious ground and pound and submission attempts until the end of the round. In the end, the judges and I saw the same things, and awarded Honchak the 20-18 Unanimous Decision victory.

With the Nico Montano vs. Montana Stewart right, it didn’t take long to solidify that this fight was going to be a grind. While Montano was the superior technical striker, she wasn’t as active as she could have been.  Stewart just wanted to get it to the ground, and even managed to score a brief takedown behind a looping right hand. However, after returning to the feet, the action was soon against the cage. It was here that Nico Montano used knees to bust open the head of Montana Stewart. That helped put the exclamation point on a winning round for the woman who knocked Lauren Murphy out of the tournament. Round Two was a bloodbath. The initial bit of stand-up belonged to Montano, and the nearly four minutes spent on the ground belonged to her as well. Nico scored a takedown, escaped a guillotine choke, and proceeded to use Montano’s head as a brush to paint the mat with blood. This was likely a 10-8 round. Montana Stewart had heart, but she didn’t have enough to win. The decision victory went to Nico Montano, who clinches the last spot in the semi-finals.

Next week, Nico Montano hopes to keep her underog streak alive in the first semifinal match, as she takes on Barb Honchak. Also, we have the producer-mandated coach shenanigans. Keep it locked to MMASucka.com for more news, opinion, and the latest edition of the TUFtermath!