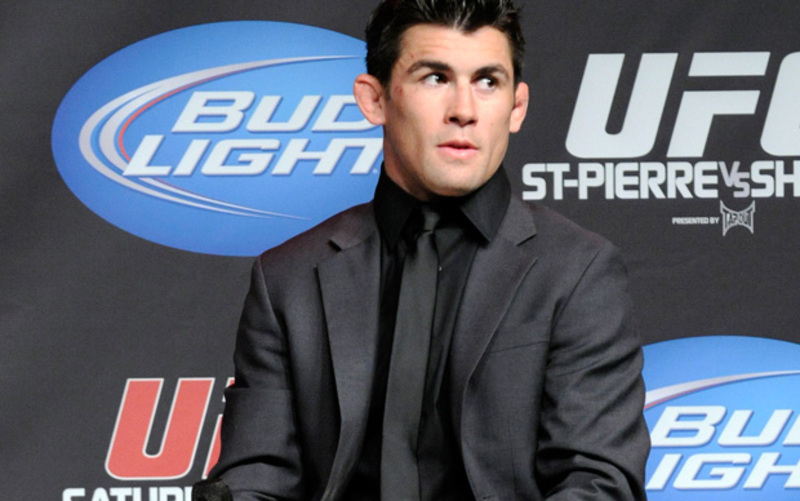 We like our heroes to be larger than life. Whether in comic books or athletics, we want our idols to be greater than anything we could possibly imagine. We want them to be… superhuman. In honor of the upcoming Justice League movie, we look at the legendary members and try to make MMA’s Justice League.

Which fighters would be in MMA’s Justice League?

Batman, as the only member of the Justice League without powers, relies more on his ability to out-strategize and outmaneuver his opponents. As befitting his early ninja training, he studies each of his opponents to construct psychological profiles and tactics to neutralize them. Despite his comparatively frail frame, however, Batman is also renowned for his toughness and dogged will to win. The man who best exemplifies these traits in MMA is Dominick Cruz.

Not only has the Dominator defeated ninjas in the past, but his keen insight into the sport and excellent tactical adjustments in the cage have led him to a TV analyst slot. As seen in pre-fight interviews with TJ Dillashaw and Cody Garbrandt, Cruz is able to coolly dissect his opponents while they become ever more flustered. And despite his obvious evasiveness and unpredictability in the cage, Cruz has proven himself to be one of the toughest fighters in the sport. He came back from multiple ACL tears to regain his title against one of the best of the new generation. He took Cody Garbrandt’s best shots and still came back to win the final round. Dominick Cruz’s intelligence, evasiveness, and iron will make him a worthy candidate for the mantle of the Dark Knight.

The Flash serves as the comic relief in the Justice League, despite being one of its most powerful members. He can utilize the speed force to move faster than the eye can see and slow down time with his enhanced reflexes. Despite the weight of his superhero responsibilities, the Flash has always been more of a lighthearted character. He is constantly zipping into even the gravest battles with a smile on his face. MMA’s Flash, is none other than John Dodson.

Dodson has always come across as a bit of a joker. Whether it is his goofy weigh-in poses or his spectacular flips after a finish, he always seems to be making the most of his time in the cage. Despite his devil-may-care attitude, however, the Magician is a very dangerous fighter. While many rate Demetrious Johnson as the man with the quickest feet in MMA, John Dodson made him look downright human in their first fight. In prior fights, Mighty Mouse’s speed had allowed him to leap in with punches and escape unscathed. In this fight, however, Dodson caught him with hard counters on the way in and sent him to the mat. Although he did not win that fight, he displayed his stunning speed and the lighthearted attitude that would make for an excellent Flash.

While Aquaman was more of a punchline for much of his existence, he has become a much more formidable figure in recent years. His Atlantean heritage grants him armor-like skin, superhuman speed, and extraordinary strength. For an MMA analog, there is no better man than the Prodigy, BJ Penn.

BJ Penn’s nickname could not have been apter. In his prime, he possessed the flexibility of an eel with skin nearly as impenetrable as a shark’s. He was only cut once in his career during his final fight with Frankie Edgar, despite spending a total of 5 hours and 38 minutes in the cage per Fightmetric. Despite his unimposing frame, Penn had a surprising amount of athleticism as well. He was able to leap out of three feet of water and defeat the much lankier Jon Jones in a swimming race. Given the body of evidence, there is no doubt in my mind that BJ Penn would be a fantastic Aquaman, and that he may even be hiding some Atlantean blood now.

Victor Stone was a star quarterback before an accident forced his father to combine his body with technology to save his life, creating the superhero Cyborg. Cyborg has superhuman strength, durability, and can transform his body into various weapons. Despite these powers, perhaps his most useful talents are his abilities to process at supercomputer-like speeds and interface with technology. The fighter who most resembles Cyborg is the flyweight champion, Demetrious Johnson.

Also a football player in high school, Mighty Mouse combines his athletic ability with an incredible ability to observe and analyze an opponent throughout the fight. Much like Cyborg, Johnson’s well-roundedness allows him to adapt his body to any scenario and range of the fight. He has finished fights in such various manners as guillotine choke, armbar, kimura, left hook, head kick, and ground and pound.

His ability to analyze his opponents, however, shows in the timing of his finishes. Mighty Mouse has three fifth-round finishes, the most in the UFC. His ability to process his opponent’s maneuvers allows him to slowly break down the challenger and work towards the finish. As for his ability to interface with technology, the champion is legendary for his love of video games (as you can see by his Twitch channel) and was even sponsored by Xbox prior to the Reebok deal. Demetrious Johnson is an incredible amalgam of man and machine, and is truly MMA’s Cyborg.

Diana of Themyscira was born on an island of Amazons and was trained in the art of war from an early age. The combination of her skills with her extraordinary speed and strength make her an intimidating opponent. Despite her strict upbringing, she tends to be a more optimistic influence on the Justice League. Given the combination of martial skill and hopefulness, the Wonder Woman of MMA is Rose Namajunas.

Namajunas also started training young. She began Taekwondo at age five and started Karate at age 11. “Thug” found Duke Roufus while she was in high school, and the rest was history. Like Wonder Woman, Namajunas has a passion for high-flying techniques, scoring a flying armbar in her second pro fight. She also displayed an array of jumping kicks while on the Ultimate Fighter. Her finishes of opponents with head kicks, kimuras, rear naked chokes, and punches show the depth of her skill.

But it is her personality that most resembles Diana of Themyscira. After the biggest win of her career, Namajunas took to the mic and urged everyone to be a better person, expressing her desire to use martial arts to make the world a better place. Despite their obvious skill and power, Namajunas and Diana just want the best for their world, and isn’t that what being a superhero is all about?.