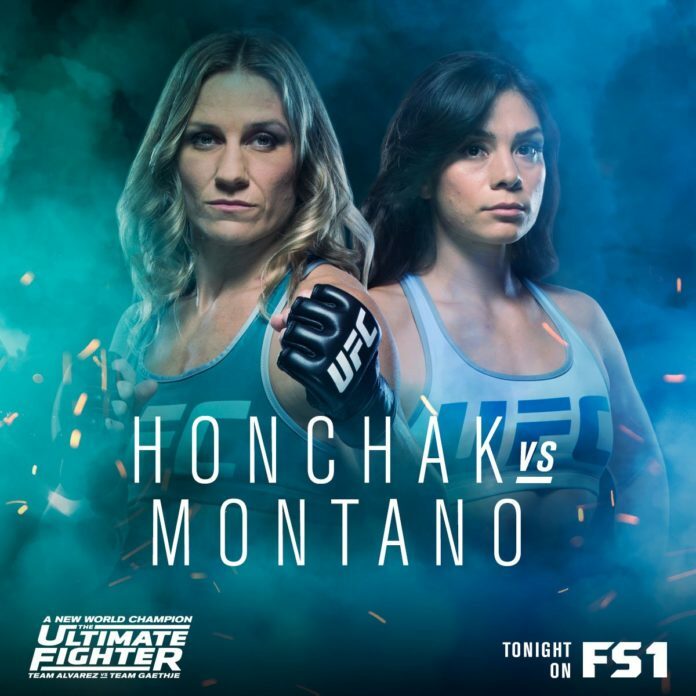 With tonight’s eleventh episode of The Ultimate Fighter‘s 26th season, we enter the semi-finals. Scrappy underdog Nicco Montano, coached by Justin Gaethje, looks to knock off another big name in Barb Honchak, the second seed fighting under coach Eddie Alvarez.  Will Team Gaethje or Team Alvarez get the first fighter into the finals? Let’s look at this week’s goings on here with the TUFtermath.

#1) Grand Borrow Auto – Eddie Alvarez’s generally stoic, Robbie Lawler-esque nature finally broke due to the monotony of the show. He swiped Justin Gaethje’s car keys, which had been left out in the open at the UFC Performance Centre, and proceeded to park it near the highway. It’s kind of insane how it was one of the most tame pranks of the show’s history while simultaneously being the most illegal. Gaethje would retaliate later by marking up Alvarez’s windows with various pro-Team Gaethje messages, then having it hoisted 30 feet in the air with a crane.

#2) Elbows – While doing an in-cage training session with Nicco Montano, Trevor Whitman – who is Justin Gaethje’s head coach outside of TUF – noted that Montano has a unique skill amongst the TUF 26 competitors with her elbows. This is the kind of thing that’s not always pointed out on the show, but it’s entirely true. Montano’s ability to draw blood with her knees and elbows is unparalleled among the cast.

#3) The Little Axe Falls – While part of it is undoubtedly that Nicco Montano is that good at maintaining top position, I was shocked at just how ineffective she made Barb Honchak look on the bottom in the first round. The fact Nicco was able to land three takedowns to Honchak’s one is also quite impressive.

Stock Up – Nicco Montano. For the second week in a row, Nicco Montano continues to look like a world-beater. While she didn’t slice Honchak’s face up with her elbows, she was strong in the clinch, scored more takedowns, and countered a Honchak takedown attempt into a backtake using sheer flexibility and moxie. It was impressive, she will be a great opponent for either Sijara Eubanks or Roxanne Modafferi.

This was a three round war. While Honchak had strong knees in the clinch and was better striking at range, Montano was stronger overall in the clinch and score four takedowns over the course of three rounds. She also was able to land some solid ground and pound, and retain advantageous positions even in scrambles and stand-ups. While the first round was clearly for Montano, the subsequent two were close. Still, after three rounds, the victory would go to Team Gaethje’s Nicco Montano via unanimous decision.

Next week, Sijara Eubanks will brave one last weight cut in order to take on top-ranked Roxanne Modafferi for the last spot in the finals. Will she make the weight? Or will she be so depleted by this last weight cut that she is at the veteran’s merc Keep it locked to MMASucka.com for more news, opinion, and the latest edition of the TUFtermath!