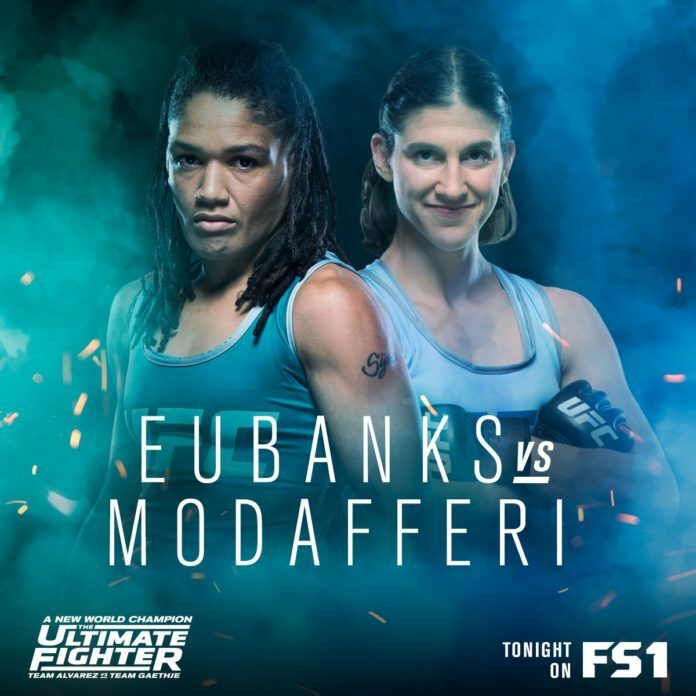 The final episode of The Ultimate Fighter Season 26 is upon us, featuring the last of the semi-final fights. Roxanne Modafferi, coached by Justin Gaethje, will take on the Eddie Alvarez-cornered Sijara Eubanks. Will “The Happy Warrior” or “Sarge“ be taking on Nicco Montano at the Finale card on Friday? Let’s find out, and break down all the important stuff here on the TUFtermath.

#1) Coders – The lead striking coach of Team Alvarez, Mark Henry, is better known for working with fighters like Frankie Edgar. He is also notable for using a code-based system while training his fighters, allowing him call out instructions that aren’t immediately obvious to the opponent and their cornerpeople. This is similar to the ludicrous naming conventions of the 10th Planet Jiu Jitsu system. Sijara Eubanks comes from a camp that also uses codes, allowing her to sync up with Henry faster than her teammates

#2) Dangerous Game – Going back to Sijara, this was her third weight cut of the season. That’s three hard cuts in six weeks. She finally went to the UFC Performance Institute for assistance with this, but I can’t help but wonder if long-term damage hasn’t already been done. With the difficulty of her cuts, I can see two potential futures for her: One, since she’ll at the very least be in title contention coming regardless of what happens this week, she could very well win the flyweight title and lose it due to missing weight. The other option is worse, in that she suffers a situation similar to Daniel Cormier at the 2008 Beijing Olympics where his kidneys shut down due to an especially rough cut.

#3) The Different Jiu Jitsus – If nothing else, the fight between Roxanne Modafferi and Sijara Eubanks was stark reminder that there are two different kinds of jiu jitsu. There is the technical jiu jitsu of Modafferi, which is predicated on mobility, grip, and position. Then there is the almost primal jiu jitsu of Eubanks, which is based on strength. I really hope that more casual fans were able to pick up on this too, because this a great example of the dichotomy between the two approaches.

Stock Up – Sijara Eubanks. This is small bump, bit it’s still an upward trend. Eubanks’ decision to visit the UFC Performance Center to get assistance with her weight cut was smart. She was not as physically depleted and it aided her conditioning. I’m not sure how it will hold up over five rounds, but it’s a start.
Stock up – Roxanne Modafferi. I know that a lot of you may find this hard to believe, but “The Happy Warrior” is only a brown belt in Brazilian Jiu Jitsu. In her fight on tonight’s episode, she clearly out-techniqued a Lloyd Irvin BJJ black belt in Eubanks. If she has not been secretly promoted in interim between the filming of the show and now, then I see a black belt in her future.

Going into tonight’s fight, I fully expected Roxanne Modafferi to walk away with this as the fight progressed. That was not how it went. While it’s not that Sijara Eubanks was blowing Modafferi away throughout the fight, she visibly had the edge over the course of three rounds. Her striking was better, and her strength allowed her to capture the takedowns. While Modafferi had more submission attempts and was able to control Eubanks even from the bottom, Sijara was still superior on the feet and with takedowns. That was what won her the fight and punched her ticket to the TUF 26 Finale main event.

This Friday, Sijara Eubanks of Team Alvarez will step into the cage against Nicco Montano of Team Gaethje in the main event of the TUF 26 Finale, in about for the inaugural UFC Women’s Flyweight Title. In addition, a number of the castmates from this season will be competing through out the card, including Rachael Ostovich-Berdon, Melinda Fabian, and more! Keep it locked to MMASucka.com for more news, opinion, and coverage of the TUF 26 Finale!