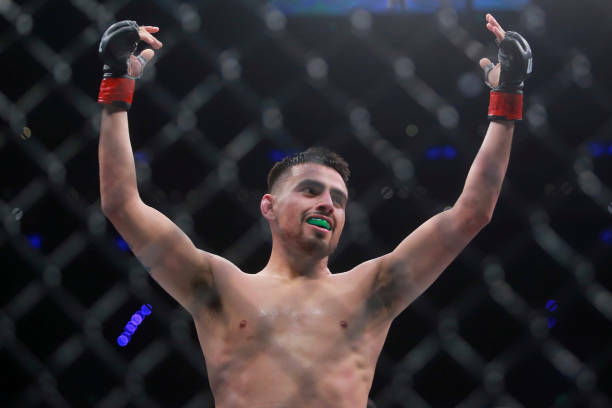 MMASucka: First off, how did you get into MMA? Do you have any other background in any other sports?

Morales: I got into jiu-jitsu when I was 11-years-old. It started as a hobby to do with my dad but before that, I played football.

MMASucka: What was your job before you got into MMA? Or are you do you still have a regular day job?

Morales: I worked multiple jobs before I got into UFC. I worked for in a building doing maintenance, then construction, and now I still work a few days a week doing heating and air.

MMASucka: What is the meaning behind the nickname “Bopo?”

Morales: “Bopo” comes from my cousin not being able to say my name when we were young. He would pronounce Joseph as bopuff and my family dropped the “f” sound off the end, and I’ve been “Bopo” since the age of two.

MMASucka: What are your favorite striking and grappling techniques?

Morales: I always kind of ignore this question, because I don’t want anyone to know my tricks, but my best techniques grappling wise are chokes. And striking is anything that lands and knocks my opponent out.

MMASucka: You are coming off a big win in August against Roberto Sanchez. Any take away’s from that fight where you saw areas of your game that you could still improve?

Morales: I think one thing I can take away from that fight is my takedown defense. I get a little too comfortable with my ground game. I can defend the takedown, I just need to choose to defend it.

MMASucka: You won a $50,000 “Performance of The Night” bonus in your debut. What was it like getting that big paycheck, and what was your first extravagant purchase?

Morales: Winning the bonus was a huge help for me and my family. It was a good feeling knowing that my hard work paid off. I didn’t really buy anything big but I did throw a big party for my son’s baptism.

MMASucka.com: You are scheduled to fight Brazilian Deiveson Figueiredo in February. What do you think of him? How do you think you match up against him?

Morales: Deiveson is a good fighter, he’s very tough and applies a lot of pressure but I think it’s very sloppy, and [he] gasses out. I’ll be able to capitalize on those flaws and finish him in his home country.

MMASucka: How do you feel about fighting outside of the US? Are you excited to go to Brazil? Do you feel a bit of pressure going into enemy territory?

Morales: This will be my second fight outside of the US. The last one was in Mexico City. I don’t really think about where the fight is, but I look forward to feeling that energy from the crowd in Brazil.

MMASucka: Team Alpha Male is a top camp and there have been rumors of Justin Buchholz and Urijah Faber having some issues. Is Buchholz still with Team Alpha Male? Is there really anything that needs to be known there?

Morales: I know he’s no longer the head coach, but that’s it from what I know.