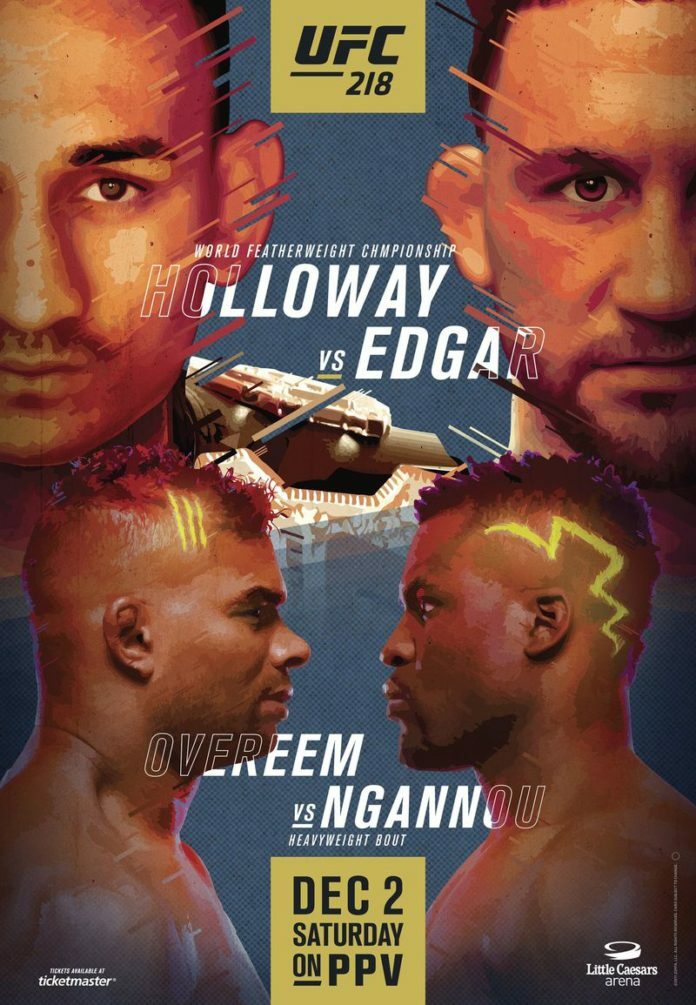 UFC 218 has arrived and it’s a ridiculously fun card. The main event should be a war. Alistair Overeem versus Francis N’Gannou is one of the most dynamic heavyweight stand-up fights we have ever had in the UFC. Henry Cejudo is going to face his first elite striker other than Demetrious Johnson when Cejudo takes on Sergio Pettis. The icing on this MMA cake is Eddie Alvarez and Justin Gaethje competing to see who’s “Most Violent.” Throughout the card are close matchups and young studs, but most of the betting potential lies in the main card. Here’s my bet slip to follow along during the breakdown and make some ? 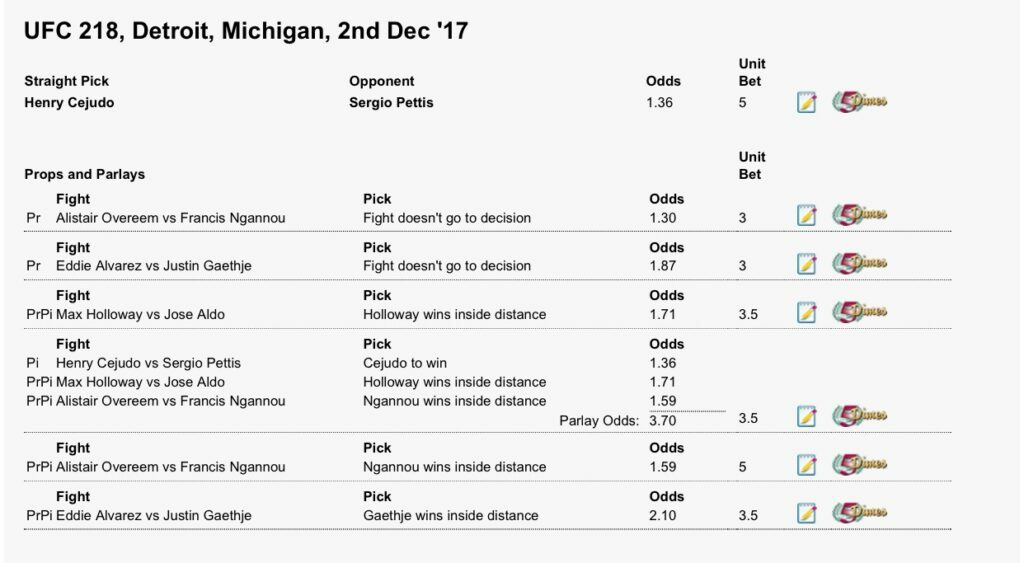 This will be an entertaining fight with lots of action, for however long it lasts. Alvarez came out and said they were fighting for the crown of ‘Most Violent,’ and Gaethje seems to be taking it personally. If they really do brawl it out on the feet, Alvarez has been dropped and wobbled by Rafael Dos Anjos, Conor McGregor, and Dustin Poirier. Gaethje has an unreal chin and a willingness to throw any strike that will connect. Even if Alvarez tries to wrestle, Gaethje has a background in wrestling and still trains it routinely. There’s a chance Alvarez can finish Gaethje like he did to Rafael Dos Anjos, so my main bet is that this fight does not go to decision.

The flyweight division is in a place where there’s Demetrious Johnson, then Henry Cejudo, then everyone else. The level right below them is Ray Borg and Sergio Pettis. This is Pettis’s chance to challenge for the 125 lb title since Johnson doesn’t seem inclined to fight TJ Dillashaw. I believe the UFC gave Pettis this fight not only because he’s deserving, but because he can be a new title challenger if he wins. Cejudo looked explosive and crisp against Wilson Reis, knocking him out with a nasty straight right after some clean jab and hook feints. One of the biggest skill gaps is the grappling, with Pettis showing some good takedown defense and scrambling ability, but Cejudo being elite at wrestling. If Cejudo had a better jiu-jitsu game I’d favor him more to win inside the distance, but instead, expect to grind out a decision.

Possibly the most intriguing fight on the card is the clash between physical freak heavyweights Overeem and Ngannou. Overeem is one of the most accomplished strikers to compete in MMA ever, and possibly the best in Heavyweight history. USADA came in and created Overeem 3.0, a guy who has seen it all and can out kickbox you until you wear down or blackout. His lack of a chin has made him a better overall fighter and much more disciplined as a result. Ngannou has made giant leaps of improvement fight to fight. In the Curtis Blaydes fight, he was flat footed and not stepping out after combos. Next fight against Anthony Hamilton, he looks much more light and agile, while ultimately getting a slick, and scary, Kimura. His last fight against Andrei Arlovski was brief, but Ngannou showed a lot. “The Predator,” was on his toes the whole fight, glided in and out like a middleweight, and disguised his naturally nasty uppercut to finish the fight. Overeem struggled with Werdum’s quickness and some of Mark Hunt’s counter punches were getting close. The giant athletic gap between Hunt to Werdum, and then Werdum to Ngannou, makes it likely Ngannou can close that distance and land. Despite all the praise, Overeem is highly skilled and if Ngannou can’t put him away early then he may start to get tired. Tired fighters resort to old habits, and Ngannou’s old habits are hanging around in the pocket flat footed and swinging wide. A decision is highly unlikely.

Side Bet: Ngannou wins inside the distance @ -170

This could possibly be one of the best featherweight fights in UFC history. Their first matchup was incredibly fun, with Holloway ultimately settling into a groove and figuring out some of Aldo’s patterns. For an in-depth technical analysis, you can look at my betmma.tips profile. Holloway was able to read some of Aldo’s more successful punches like the jab and tight right while moving and start countering and tagging Aldo back. The rematch should be even better since the news came out Aldo had an injured leg in the first fight and never threw a kick. Aldo has devastating leg kicks, and Holloway is pretty heavy on the lead leg. That combo leads to a more bloody, scrappy fight for everyone’s enjoyment. Holloway really got reads on Aldo, whereas Aldo landed some shots early then didn’t re-adjust. As a result, even with Aldo probably performing better this fight, I still see Holloway finishing him. The line to win outright is fair, but the line to win in the distance is much better.