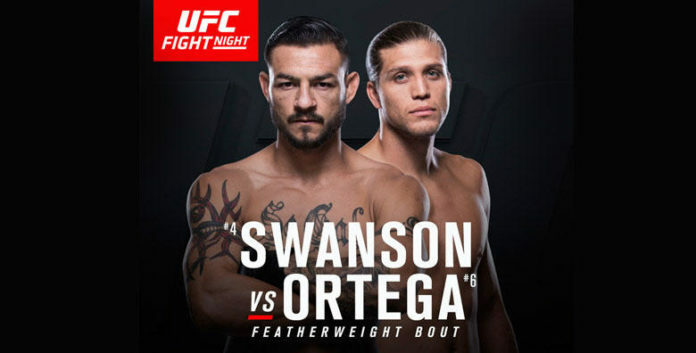 The UFC goes live once again this weekend, with UFC Fight Night 123 going down live from the Savemart Center in Fresno California. In the main event, featherweight contenders Cub Swanson and Brian “T-City” Ortega. Underneath them will be a coterie of fighters, both veterans and prospects, looking to implant themselves into the fans’ memories. With uniforms in place, it’s now harder than ever for those athletes to make a lasting impression. One of the few ways left to do so is with walkout music. However, many fighters pick samey-sounding songs, overused songs, or songs that don’t fit their personal brand. That’s where I, the Walkout Consultant, come in. As MMASucka.com’s resident musicologist, I’m here to help these wayward fighters find better entrance music. So, without further ado, here… We… Go!

What he last walked out to: “Can’t Hold Us” – Macklemore and Ryan Lewis

What he should walk out to next: “Suicide Doors” – Skyzoo

A lot of fighters, for reasons that continue to escape me, like to make their way to the cage to Macklemore and Ryan Lewis’ “Can’t Hold Us.” Regardless of my thoughts on the song, it pretty much belongs to Raquel Pennington at this point in terms of entrance music. So where does that leave a scrappy bantamweight like Andre “The Laotian Sensation” Soukhamthath? Well, for a man who I once saw throwing knees while on top in half-guard while scouting him in advance of the TUF 18 tryouts, it has to have a rock solid beat. It has to have a sense of forward motion, too. A great song for that, in my opinion, would be “Suicide Doors” by Skyzoo. With its soul-sampling build of an intro to its boom-bap beats and lyrics about deciding your future, I think it’s a great fit for Soukhamthath. Listen below.

What he last walked out to: “I’m Coming Home” – Diddy feat. Skylar Gray

What he should walk out to next: “Fight Club (Remix)” – Pep Love

If it hadn’t been used over and over by any fighter walking to the cage within 100 miles of their hometown, I wouldn’t mind “I’m Coming Home” so much. It’s a decent enough walkout, easily identifiable from the first bar. The problem is the overuse of the song. That means a different walkout song will need to be found for “Magic” Marlon Moraes. It can’t just be any song though, as Moraes is a killer. After all, he once terrorized WSOF‘s 135 lbs. division in a manner second only to Justin Gaethje‘s lightweight dominance. So, he needs a song with some heft to it. Not heavy metal, but definitely something with an aura of intimidation. Something like the remix of Pep Love’s “Fight Club” off of Heiroglyhpics’ 2007 retrospective, Over Time. Check it out below.

Keep it locked to MMASucka.com for more MMA news and opinion, as well as UFC Fight Night 123 coverage!