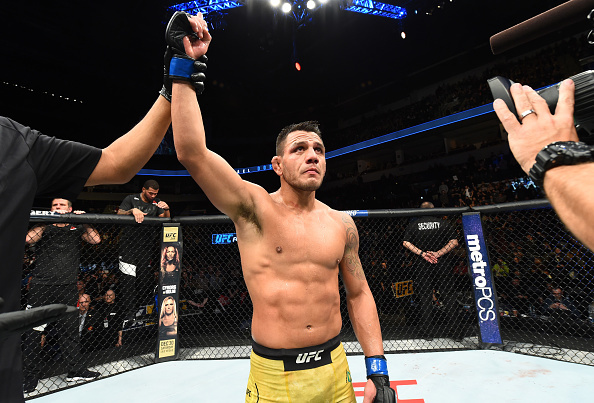 The last couple of weeks have showcased some exciting MMA fights. Plenty of knockouts, submissions and tightly contested decisions have caught the attention of the MMA world. While those who won celebrate and those who lost go back to the drawing board, fans want to know: what’s next? Armchair Matchmaker takes a look at some potential match-ups that should be made in various promotions.

Rafael dos Anjos impressed the MMA world with a dominant 50-45 unanimous decision win over Robbie Lawler on Saturday night. Normally, he’d likely get the next title shot at welterweight champion Tyron Woodley. But Woodley may be out for several months due to shoulder surgery. Who should dos Anjos’ next opponent be?

No. 3-ranked welterweight Colby Covington, who has been making waves lately with his trash talk, called out dos Anjos for an interim title fight on Twitter. The ball is likely in dos Anjos’ court. If he wants to wait, he has done enough for the next title shot. With Covington’s disrespect towards him and Brazil however, the former lightweight champion may want to try to teach Covington a lesson. Whether it’s for an interim title or not is up to the UFC.

MacFarlane became the inaugural Bellator flyweight champion with a submission win over Emily Ducote at Bellator 186. Now the question is: who will she fight in her first title defense? Letourneau, a former UFC strawweight title challenger, represents the best option. The Canadian made good on her promotional debut with a unanimous decision win over Kate Jackson. Her high profile may get her the first crack at MacFarlane in the developing division.

If Pavlovich (12-0) were to defend his Fight Nights heavyweight championship against Minakov (21-0), it would be a battle of undefeated fighters. It’s surprising that they haven’t met yet. Maybe now’s the time? It would be the biggest fight the promotion could make.

Emmett caused shockwaves in the MMA world when he knocked out Ricardo Lamas on Saturday. Lamas was the No. 3-ranked featherweight heading into the fight. Emmett, who was unranked, will soar into the top-10, if not top-5. Emmett is now in line for another top-5 matchup. Swanson would not only be a good next fight for Emmett, but it would also be very exciting for fans. Emmett has five knockdowns in his last two fights. Swanson is never in a boring fight. Book it.

McDonald was successful in his Bellator debut with a unanimous decision win over Peter Ligier on Friday. That said, it’s time for a step up for the former UFC bantamweight title challenger. Leandro would be a good challenge for “Mayday.” The winner might even be granted a title shot at Bellator bantamweight champion Darrion Caldwell.

Santiago Ponzinibbio vs. Darren Till (UFC)

Had Mike Perry defeated Ponzinibbio, the UFC likely would have made Till vs. Perry. Ponzinibbio may have stolen that matchup from Perry with his unanimous decision win on Saturday. The No. 7-ranked Till represents a good step up and opportunity for Ponzinibbio, and it would be an exciting fight between two great strikers.

Both welterweights are coming off losses: Perry to Ponzinibbio on Saturday, and Means dropped a split decision to Belal Muhammad last month. The UFC would be wise to match them up. Perry and Means are two of the most exciting and violent strikers in the UFC, and it’s a fight that makes perfect sense.

Maia defended her Invicta flyweight title with a unanimous decision win over Aga Niedzwiedz a couple of weeks ago. The champion may finally get the deserved call to the UFC. Once there, a fighter of her caliber could be granted a top flyweight. Murphy, who recently defeated former Invicta flyweight champion Barb Honchak, would be an excellent test to see where Maia is at when it comes to UFC-level competition.

Dern impressed fans with her third-round submission over Kaline Medeiros. That said, it’d be smart not to push Dern into the UFC too quickly. She’s still developing, and at least three fights away. Montenegro would represent the perfect next step in Dern’s development.

Gomez pulled off an upset on Friday when he knocked out Sodiq Yusuff to win the Titan FC featherweight title. His first defense should come against Hutchinson, a 6-1 prospect. Hutchinson won his Titan debut against Bruce Lutchmedial in January.

Both atomweights lost their last fight, so this bout makes a lot of sense. Cummins lost a close decision to highly-touted Jinh Yu Frey, while Simpson was submitted by Amber Brown a couple of weeks ago. Cummins holds a decision win over Brown.