For the first time in over two-and-a-half years, the UFC’s Strawweight Division crowned a new Champion in 2017. When “Thug” Rose Namajunas beat then-champ Joanna Jedrzedjczyk division was turned on its head. Not due to a lack of talent from Namajunas, but the complete dominance Jedrzedjcyk had shown up to that point.

Moving into 2018 the main focus will be on Joanna Jedrzedjczyk and if the UFC will grant her an immediate rematch. Most times, especially after being stopped in the first round, the UFC tends to like seeing a challenger get a win under their belt first. This policy has served them well, but if not Jedrzedjczyk what’s next for Namjunas?

With no obvious answer, the UFC would serve itself well by setting up the rematch. If Jedrzedjcyk wins you set yourself up for a trilogy fight down the road. If Namajunas wins you can then run her through the gauntlet of fighters that lost to Jedrzedjcyk. Not to mention that striking while the iron is hot is important. This is an easy sell with Rose’s performance still fresh in fans heads.

The Rest of the Ranked:

The Rankings are littered with potential future contenders, but going into 2018 it’s safe to say the title contenders remain the same. Jessica Andrade, Claudia Gadelha, and Karolina Kowalkiewicz continue to beat up on one another at the top. Most recently with Andrade beating Gadelha by decision in September. Kowalkiewicz and Andrade fight at UFC on Fox 28 and the winner will not only be on a two-fight win streak but potentially be in line for a title shot. 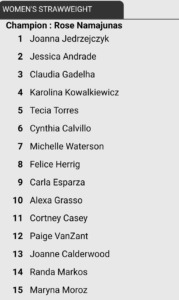 The only other fight scheduled right now for two women within the Top 15 is the scrap between Carla Esparza and Cynthia Calvillo. A fight which happens next week at UFC 219 and is flying way under the radar. Esparza a former champion against Calvillo who with a win could be considered for Fighter of the Year.

Calvillo came into the year at just 2-0 as a Pro and outside of the UFC. She fought for LFA in January and beat now UFC Flyweight Montana Stewart by 3rd round TKO. A win against Esparza would not only mean a win over a former champion but her fourth UFC win in the calendar year and 5th overall. This fight should be getting much more love than it has been.

#3 Claudia Gadelha vs. #7 Michelle Waterson: Both women are coming off of a loss, but are only a win or two out of title talk. Make this fight now to set up a push for one of these two later in the year.

#5 Tecia Torres vs. #8 Felice Herrig; This just makes too much sense. They fought n the same card and are both on long win streaks. Give the winner the winner of Kowalkiewicz and Andrade for a number 1 contender spot.

Tatiana Suarez (5-0); After winning The Ultimate Fighter 23 by defeating Amanda Bobby Cooper via D’Arce Choke in July of 16′, Suarez hype was at an all-time high. Unfortunately, an injury knocked Suarez out of her fight with Juliana Lima at the end of 2016 and put her on the shelf until November of this year.

After defeating then 13-0 Viviane Pereira at UFC Fight Night 120, the hype is back and many are wondering if 18′ will be the year for Suarez. Look for Suarez to get a step up in competition soon. A fight against the likes of #11 Courtney Casey or #10 Alexa Grasso would be a great test for the 27-year-old up and comer.

Make sure to stick with MMASucka as we make our way through each division with a recap and preview of what to expect in 2018.