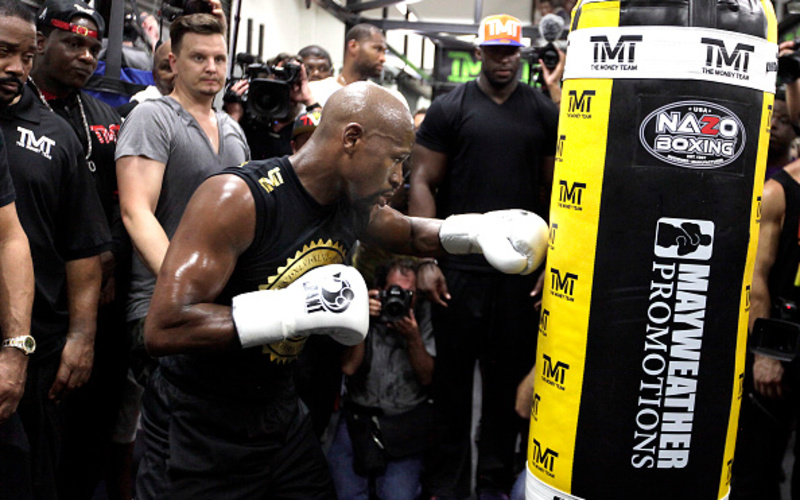 The MMA world was going bananas on Wednesday morning, as UFC President Dana White said there is very real talk between the promotion and Floyd Mayweather. There were plenty of offers to welcome Floyd Mayweather to UFC.

“We’re talking to Floyd about doing a UFC deal,” White told ESPN.com. “It’s real. He was talking about (boxing) Conor McGregor. Was that real? Have you heard Floyd talk about many things that aren’t real? He usually tips his hand when he’s in the media, and then that (expletive) ends up happening.

“We’re interested in doing something with Floyd. Everything is a realistic possibility. Mayweather vs. McGregor (expletive) happened. Anything is possible.”

This came after Mayweather teased the possible transition in Periscope video,

When UFC fighters found out about the boxing legend wanting to transition over to the cage, they were ready and willing to be the first to welcome him.

@floydmayweather ? vs ? I’ll move up 20 pounds to welcome you proper pic.twitter.com/R400vMz0dX

I will box mayweather with 4oz gloves on for a million dollars. #DangerThings

Others stated their opinions on Twitter as well and there were mixed reviews.

This is probably not real. Let’s assume, for a moment, it is.

The issue is not booking F.M. They booked Toney, but against Couture. They set him up to fail.

The key is who they match him with. If it’s a tailor-made opponent, that’s a sign the UFC as we have known it is no more. https://t.co/7cXh0nf8GL

I know fourteen year old kids that would ruin Mayweather in an MMA fight. He’s not silly enough to step into the Octagon. https://t.co/MBhj9CkGVX

Floyd is a master of staying relevant without a fight.
If you think for 1 second Floyd is going to do an MMA Fight and risk tarnishing his GOAT legacy you’re dumber than he would be if he actually did it.

. @FloydMayweather crossing over into MMA, really?

Hell yeah no one better https://t.co/oiaJMSNfhk

We saw Conor McGregor make the move to the squared circle, so is it a possibility for Mayweather to make the opposite move?
Well our friends at Bodog came out with initial odds, not on if Mayweather would win, but if he would even make the trek into the Octagon in 2018. If you were a betting man, then the money might be right, as he was a +500 to step inside the cage and -900 not to.

You can never say never when it comes to what will happen within the UFC.