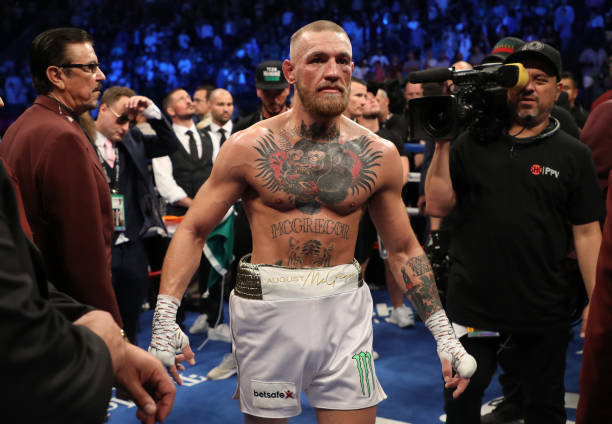 2017 was an interesting year to be an MMA fan. From the hotly anticipated return of Georges St-Pierre to the madness that was Mayweather-McGregor, to Bellator’s continued expansion under Scott Coker, there was plenty of water-cooler fodder for dedicated face-punching fans.

As we head into 2018 however, a specter of uncertainty hovers around the sport. Doubt surrounds the competence of the UFC’s new(ish) owners, William Morris Endeavours, legislation that would fundamentally disrupt the MMA industry is advancing through the US Congress, and Conor McGregor is making headlines for all the wrong reasons. With these issues and more in mind, these are the six burning MMA questions MMASucka has heading into 2018.

Will Conor McGregor Return to the UFC?

In 2017, the Irish superstar was featured just about everywhere: the boxing ring opposite Floyd Mayweather, the UK Fashion Awards with pop star Rita Ora, even the Bellator cage which he (controversially) crashed to celebrate his teammate’s victory last month. Everywhere, that is, except the UFC’s octagon.

Since winning the 155lb strap in November 2016 from Eddie Alvarez in the UFC’s inaugural show at Madison Square Garden, McGregor has made it known that he won’t return to the promotion without an ownership stake in the company. During his 13-month hiatus from MMA, “The Notorious” has had a son with long-time girlfriend Dee Devlin, expanded his many businesses, and made his professional boxing debut in the second largest pay-per-view event in combat sports history.

Though he has teased his return to the cage with social media posts such as this one and was briefly connected to UFC 219 before the aforementioned Bellator incident, it is still unknown whether he will return to MMA or continue his career in the squared circle.

Given the potentially calamitous debt that WME (the UFC’s owners) acquired when purchasing the company in 2016, it’s safe to say that they want the Irishman back in the octagon printing them money. The real question is, however, whether they’re willing to pay him what he’s worth to do so or risk fighting him in court to prevent him taking his talents elsewhere.

Is the Interim Belt Madness Over?

Between the UFC’s inception in 1993 to 2015, there were only seven interim belts in circulation, almost all being created to cater to the long-term absence of an injured champion. From 2016 to 2017 however, there were five interim belts created – with at least one being manufactured solely to save a pay-per-view event.

Whilst interim belts are (financially) good news for the fighters involved, the MMA community has generally interpreted their proliferation for what they are: a cynical marketing ploy by the UFC to generate interest in glorified number #1 contender fights. The fact that interim belt holders aren’t even entitled to a shot against the undisputed champion of the division makes them even more meaningless, with a correlative impact on the accessibility of the UFC to casual fans.

The question is: will the UFC listen to fan complaints, or continue creating interim belts at the expense of the sport’s legitimacy? We’re likely to find out in 2018, with the UFC’s response to Tyron Woodley’s absence due to shoulder surgery (i.e. whether they create an interim belt contested by Rafael Dos Anjos and Colby Covington) likely giving a decisive indication of their broader intentions.

Will the Muhammad Ali Expansion Act Pass into Law?

The Muhammad Ali Boxing Reform Act (“Ali Act” for short) was passed in 2000 to address widespread corruption and exploitation in the boxing industry, much of which was personified in the treatment of pugilistic icons Muhammad Ali and Mike Tyson (amongst others) by the notorious Don King. The legislation invalidates coercive contracts (for example, those are that in effect over 12 months and require fighters to sign over long-term rights in order to compete for a title); imposes financial disclosure requirements designed to empower fighters in their negotiations with promoters; and creates various obligations on athletic commissions and sanctioning bodies aimed at increasing transparency and uniformity in how boxing matches are organised.

A bill to expand the Ali Act to MMA was introduced into the House of Representatives in 2016 by Oklahoma Congressman and former MMA fighter Markwayne Mullins. Thanks to the lobbying efforts of the Mixed Martial Arts Fighters Association, the bill now has over 50 co-sponsors and is expected to pass to the Senate in early 2018.

If it gets through both houses and isn’t vetoed by President Donald Trump (y’know, Dana White‘s close personal friend), the legislation would fundamentally change the way promotions like the UFC and Bellator operate — not least by placing responsibility for rankings and championship matchmaking into the domain of independent sanctioning organizations. Champions and top contenders would, therefore, be free to receive offers from the open market – inevitably driving up their pay and conditions and smashing the UFC’s current revenue sharing model, amongst other changes.

There are a lot of hurdles before the bill passes into law, and the UFC has spent considerable sums lobbying against its passage. Chances are by this time next year we’ll know if all that expense paid off, or whether MMA as we know it is over.

Will Bellator’s Heavyweight Tournament Be Successful?

Even Scott Coker has been impressed by Bellator’s upswing since he usurped Bjorn Rebney’s position as president of the Viacom-owned organization in June 2014. From picking up a swathe of free agents including Rory MacDonald, Chael Sonnen, and Gegard Mousasi, to making the promotion’s second foray into the pay-per-view market, Bellator has been gaining ground on the UFC in a way few would have anticipated just a few short years ago.  By all indications, 2018 stands to be a banner year for the company, with the highly anticipated welterweight title fight between Douglas Lima and Rory MacDonald marking the promotion’s debut on the newly rebranded Paramount Network (succeeding Spike TV).

The centerpiece of 2018 will, however, be the big men, with Coker announcing an eight-man grand prix to determine the promotion’s first heavyweight champion since Vitaly Minakov, who vacated the crown in May last year. Whilst the star-studded move has been generally well-received by the MMA community, many have been quick to criticise the ‘geriatric’ nature of the tournament (the youngest participant, Ryan Bader, is 34) and the fact that 50% of the participants are actually light heavyweights.

With that in mind, the question for Bellator is this: can the tournament overcome the odds and be a success in its own right – or will it be dogged by injuries, late replacements and the ghost of the Strikeforce Heavyweight Grand Prix?

Will The UFC Land the TV Deal it Wants?

Six years ago, the UFC entered into a landmark deal with the Fox Sports Media Group that netted the promotion an estimated $100M in rights fees per year. It was the first time that the sport’s premier promotion broadcast live events on network television, and the partnership was integral to the UFC becoming further embedded in the mainstream sports pantheon.

Fast forward to today, and that deal is 12 months away from expiring, with the UFC looking to wrap up a deal worth as much $450M per year to succeed the Fox Partnership by early 2018 at the latest. While the UFC is reportedly negotiating with a number of suitors, including ESPN, NBC, and Amazon, in light of declining ratings and the absence of major stars such as Conor McGregor and Jon Jones, that number looks increasingly unrealistic.

With the UFC pulling generally underwhelming pay-per-view numbers (at least compared to 2016) and WME’s debt alluded to earlier, this TV deal could secure or derail the promotion’s long-term financial security. For that reason, it’s one to watch for in 2018.

What Will Happen with the Class Action Lawsuit Against the UFC?

Three years ago almost to the day, former UFC fighters Cung Le, Jon Fitch and Nate Quarry (among others) filed a class action lawsuit against Zuffa, the UFC’s parent company. In a nutshell, the fighters allege the organization has engaged in anticompetitive conduct to maintain an illegal monopoly over the promotion of MMA and obtain monopsony power in the MMA market (explained here). If successful, the suit could lead to an award of hundreds of millions of dollars to the fighters affected by the conduct (which could number in the hundreds), and fundamentally change the way the UFC does business.

After surviving a motion to have the lawsuit dismissed in 2015, the case has been quietly but steadily making its way through the U.S. District Court system, and reports indicate that a decision will be made whether the class will be certified sometime in 2018. If the class isn’t certified, the lawsuit will likely be dead in the water. But if it is certified it’s possible a trial could be held in late 2018 if the parties don’t reach a settlement before then.

Given how notoriously secretive the UFC is about its inner workings, the potential for those workings to become public record would be huge, not least because it would finally allow pundits to fact-check some of Dana White’s many, many assertions over the past 15 years.