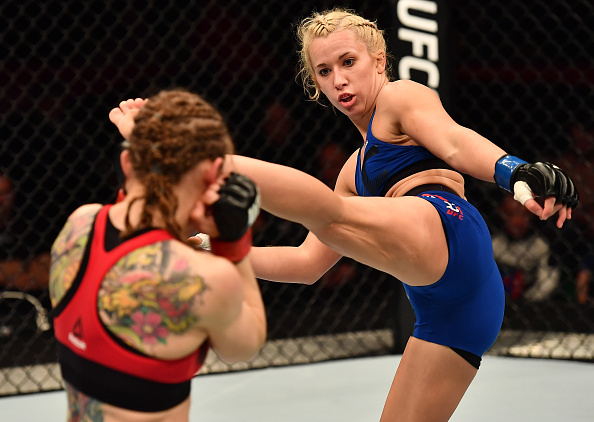 UFC 218 was filled with special moments. There was the Fight of the Night war between Eddie Alvarez and Justin Gaethje. Francis Ngannou impressed in his first-round, one-punch destruction of Alistair Overeem. The night was concluded by Max Holloways‘s repeat dismantling of former Featherweight Champ Jose Aldo. However, what might have been overlooked was a fight that took place just before the televised prelims, in the women’s strawweight division. A fight that a victorious Amanda Bobby Cooper calls ‘the best moment of my life.’

Amanda Bobby Cooper hoping to ‘keep the momentum going’ in 2018

You see, this wasn’t just a fight like any other for the 26-year-old Cooper. ‘ABC’, as she is affectionately known to her adoring fan base, was fighting in her home state of Michigan for the first time in her professional career. Not only that but her opponent, the brash Angela Magana, was hell-bent on ruining her homecoming. She was set on embarrassing Cooper in front of her own people. This was something which she was not afraid to vocalize in the lead-up to the fight.

Today I'm thankful 2 @danawhite 4 giving @ABCnation115 fight she wished 4.4 her this is a dreamfight,guess what bitch it's gonna turn n2 ur worst nightmare. U in ur hometown w mama watching.U have the pressure.U r in heaven and I come from hell. Let's c what ur made of bitch.

“The fight with Magana was a little more personal than previous fights I’ve had in the past. She trash talked a little (before the fight) and it fired me up even more to get the win, and in a devastating way”.

Cooper was certainly true to her word, dominating Magana in about as one-sided a performance as you are likely to see. The Bath, Michigan native took Magana down at will, before plying her with a merciless onslaught of strikes in the first round. It was a round which Magana was lucky to see the end of. The second round was almost a carbon copy of the first. Even a blatant fence-grab from Magana was not enough to prevent Cooper from again pulling her to the ground, and raining down punches. Finally, referee Keith Peterson determined he had seen enough. Cooper had earned her first finish in the UFC. It was also her first win in a little over a year. In front of her family and friends, she was understandably overcome with emotion.

“I had a ton of people come out to the arena and watch me”, Cooper recounts. “Most of my family have been watching me fight since I started boxing but a lot of my newer teammates and fans came out to watch me fight live for the first time.”

Moving Forward in The Division

On where she stands in the division, Cooper is adamant that her 3-3 record should not bear too much weight.

“I feel like that is very deceiving. My wins in The Ultimate Fighter house don’t count on my record and the only 3 people I have lost to are undefeated superstars in the UFC. After beating Magana as easily as I did, I definitely think I proved I belong at the top.”

If you thought that being on the receiving end of a beat-down from Cooper would produce some uncharacteristic humility from Magana, you would be wrong. Instead, the 34-year-old launched another foul-mouthed tirade, something which the MMA community is, by now, all too familiar with. And an act that has become, in all honesty, wholly laughable.

I need to walk in the cage with a banana in my shorts and a crew cut then maybe the ref will let the fight go. Men can fucking tap out from strikes get hit and the ref wont stop it till 7 shots later after near death expierence #equalrightsinfights #letthegirlstakebeatingstoo

Amanda was fucking bashing me & overpowering me, I wasnt rocked still moving was completely aware I immediately sat back & bitched at ref. Heard my corner yell out I had less than 30 seconds. I was thugging it out hoping for a 3rd & have a chance back on my feet again. #ufc218

“I knew Magana was going to have something to say after the fight before I even fought her”, Cooper remarked. “She’s an interesting person so nothing she says surprises me.”

Since the December 2nd bout, Magana has been cut by the UFC. Cooper is, by all accounts, on to bigger and better things.

“After the New Year, I plan on getting back into serious training and hopefully finding a fight in the near future. I felt so good before my last fight and I want to keep the momentum going.”

If recent events are anything to go by, expect a big 2018 for Amanda Bobby Cooper.