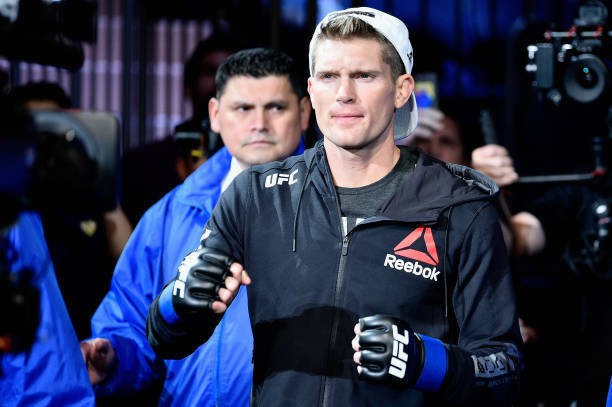 The welterweight division in the UFC is one of the best divisions in the organization. From top to bottom, the rankings are filled with top-notch fighters. If they can have a strong 2018, there will be no shortage of challengers for champion Tyron Woodley, after he recovers from shoulder surgery. Many names have established themselves in 2017. Fighters like like Darren Till, Kamaru Usman, and Yancy Medeiros.

With Rafael dos Anjos recently defeating Robbie Lawler, there is a possibility that he could take on Woodley for the title at some point this year. There is also a chance that Woodley takes on Georges St-Pierre in a fight that could determine the greatest welterweight of all-time. Plus, there’s always a possible return by Nick Diaz. With many different options in this division, it’s time to play matchmaker. This is the UFC welterweight wishlist for 2018.

After Rafael dos Anjos’ destruction of former champion, Robbie Lawler, people believe he should be next in line to fight Tyron Woodley. Not so fast though.

While dos Anjos may be looking impressive since joining the 170 pound weight class, Woodley’s time as champ has been just as impressive. He knocked out Lawler in the first round to capture the title at UFC 201. Then he went on to fight Stephen Thompson, not once but twice, at UFC 205 and UFC 209. After that he took on Demien Maia at UFC 214. Defeating him in what people may be calling a boring fight, but he was injured and was still able to stuff every takedown, and defeat arguably the best Jiu-Jitsu practitioner in the game.

Now that the return of Georges St-Pierre has already happened, and he looked great, it is time for Woodley and GSP to face each other. Can Woodley prove that he may be the greatest welterweight of all-time? St-Ierre returned at UFC 217, deafeating middleweight champion Michael Bisping, and becoming the new champion. He ended up vacating the title a month later, but still has made it clear he would like to fight again.

Coming back down to the division he had dominated for years, to take on the current champion, to determine the greatest welterweight of all-time, would be a dream match-up. And it is the only one that it’s okay to put a fight between Woodley and dos Anjos on hold. This is a fight that needs to happen, and hopefully the UFC does.

#2: Stephen Thompson vs. Darren Till

When Darren Till faced Donald Cerrone it was Till’s coming out party. He dominated Cerrone en route to a first round TKO. After the fight, he called out former title challenger Stephen Thompson, in what would be a stand-up war. The fight was rumored to happen, but Thompson’s team quickly shot those rumors down, stating that Till needs to fight his way to the top before getting to challenge him anytime soon.

With Thompson having already lost, and fought to a draw, against the champion, a third fight is unlikely. With that being said, Till’s time is now. The UFC should use Till’s hype like they use every other upcoming superstar’s, and put him in a fight with Thompson and see what happens.

If Till comes out victorious, the UFC has a new superstar .If not, then it would just be another derailment of a hype train. But Till definitely has the skill to become a future champion, and a fight with Thompson would put his skills to the test. He proved he should get a big fight after the win against Cerrone. Before that fight, not many people knew who Till was, but after the fight, he had everybody talking about him. Putting him against a very talented striker in Thompson would be a fight that could either produce a new title challenger, or allow Thompson to stay put near the top of the rankings. Expect more talk about this potential fight during 2018.

The first time Robbie Lawler and Nick Diaz faced each other was all the way back in 2004 at UFC 47. This fight marked the first time that Lawler had ever been knocked out during his professional career. He wasn’t stopped via strikes since then. Until he met Woodley, probably the most powerful puncher in the welterweight division.

Nick Diaz has been out of competition since he fought Anderson Silva at UFC 183. Because of a suspension he received after that fight–due to testing positive for marijuana–Diaz has stayed away from the sport. His suspension was lifted last year, but there have not been many rumors regarding his return to the octagon. With the possibility of him coming back in 2018, this is the perfect comeback fight.

Lawler lost his last bout against dos Anjos, and blew out his knee in that fight as well. Many people have wanted to see this rematch ever since the first. It would be a very exciting fight that would also prove whether or not Diaz has lost a step. But he is a Diaz brother, so he most likely is still a very tough out for anybody. If this fight were to be booked in 2018, once Lawler recovers from his knee injury, it is likely to garner interest from diehard and casual fans. Hopefully the UFC can persuade Diaz to come back, and if they do, hopefully this is the fight he comes back to.

If, by the time this article has been put up, Kamaru Usman defeats Emil Meek, he should start to be a little more respected, and receive the big fights he deserves.

Before Rafael dos Anjos climbed the rankings like he did recently, Usman called him out, but dos Anjos went on to face other opponents. Usman is 6-0 in the UFC and deserves higher ranked opponents at this point, and a match up with dos Anjos would test him and definitely be his toughest fight to date.

After debuting in the welterweight division in June, dos Anjos has gone on to win two more bouts against Neil Magny and Robbie Lawler. Putting him in the position to challenge for a title. With the current champion campaigning for a fight with Georges St-Pierre, which should happen, dos Anjos will need to stay active and defend his spot near the top of the rankings

If Usman could get a fight against dos Anjos and win that fight, then everyone will know that he is definitely legit.

After a win over Mike Perry, Santiago Ponzinibbio deserves some higher ranked opponents. A fight with Jorge Masvidal would be an exciting as both men have the capability of knocking their opponent out at any moment.

Masvidal has been an exciting fighter in the welterweight division, but has not really been able to capitalize against top tier opponents. That doesn’t mean that a fight with Ponzinibbio wouldn’t be a tough fight for him. Ponzinibbio has looked impressive lately, winning six straight, with his last two coming against Gunnar Nelson and Perry. He has exceptional knockout power, and could end the fight at any minute. A fight with Masvidal would be a test for both men.

Masvidal is a skilled striker that has some notable wins at welterweight against Donald Cerrone and Jake Ellenberger. His last two fights have been a bit of a disappointment though, as he’s lost two decisions to former title challengers Maia and Thompson. A win over Ponzinibbio, plus another win or two, could put him in a spot to fight for a title shot. This should be a fight that the UFC considers during 2018, as the reward for both men would be big.

With a possible title fight this year between Woodley and St-Pierre, top contenders will have to defend their spots at the top. Out of all the great fights that the UFC could consider putting on in the 170 pound weight-class, these are the five that could produce either new stars, or keep the same guys at the top of the rankings.