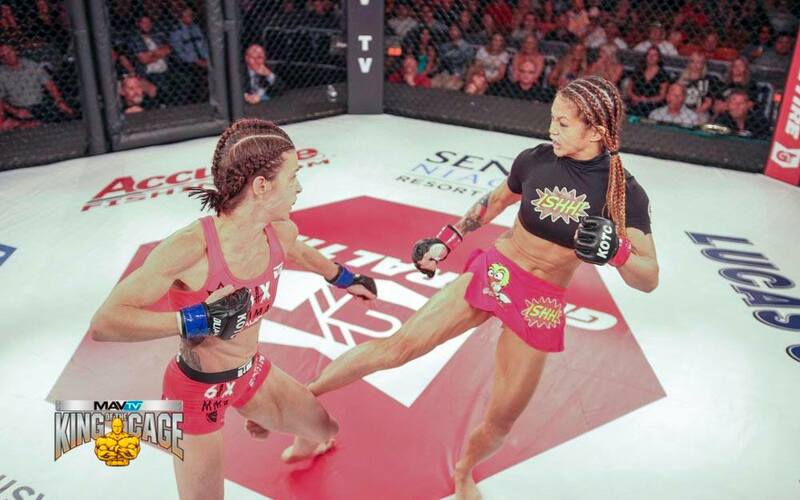 People thought former King of the Cage (KOTC) atomweight champion Andy “The CrAsian” Nguyen would drop out of her upcoming KOTC bout after the sudden death of her father. Deep grief is mentally exhausting and all-consuming in a way those who have never experienced it can never imagine. Nguyen’s training was curtailed as she struggled her way through mourning for her father. But the CrAsian has regained her emotional balance, and has something to say to those who doubted she would be ready to face her opponent this Saturday.

“So many people thought and wanted me to pull out from my fight because of my father’s recent death. Too bad they didn’t realize something — I don’t pull out.”

Fan favorite Nguyen (5-5) meets Canadian fighter Katie Saull (1-2) on Saturday, Jan. 13, at “KOTC: Mercenaries 2” in Sloan, Iowa. It’s Nguyen’s return to the KOTC cage after losing her strap to Melissa Karagianis this past August. She is hoping the return will be a triumphant one.

Nguyen has kept herself busy since her transition from ring girl to pro fighter in August 2015. She’s split her training time between her home town of Myrtle Beach, SC, and coach Donny Aaron’s Karate Mafia Gym in Bossier City, LA. She has wins over fellow KOTC fighters Cassie Robb, Bi Nguyen, and Elaine Santiago, and has become a popular recurring presence on RIZIN cards in Japan, where she has a win over Miyuu Yamamoto and a recent devastating KO loss to Rena Kubota.

Nguyen is popular, and marketable, and she knows it. She uses that popularity to gain sponsors and help defray her training costs. She’s known for her annual “fighter cheesecake” calendar she does with best friend and UFC flyweight Andrea “KGB” Lee. She’s also known for her often tongue-in-cheek sexy social media pics, but she’s much more than the “sexy fighter.” Nguyen is smart and articulate, with a salty sense of humor. And she’s a single mom to a teenage son, with a voice that still carries the faint lilt of the Carolina low country.

“Fighting is like my espresso shot, it wakes me up.”

Nguyen’s “sex sells” sometimes clouds the fact that she is a fighter, with the mind of a fighter. Once the kickass catwalk strut of her walkout song is over, and her cowboy hat thrown into the roaring crowd, mitts go on and the cage door is locked. Then, she’s more than ready for the banging to start. As she told her hometown paper last year, “[Fighting is] like my espresso shot, it wakes me up. When I get punched I’m like, ‘Oh, I’m in a fight.’ I don’t mind it.”

So what’s next for Nguyen? She’s 35, an age when many fighters start thinking about leaving their mitts in the cage. But retirement is a word not yet in The CrAsian’s vocabulary.

“I want some more fights here in the States, then back to RIZIN,” Nguyen said.

Nguyen is ready to see what 2018 will bring her.