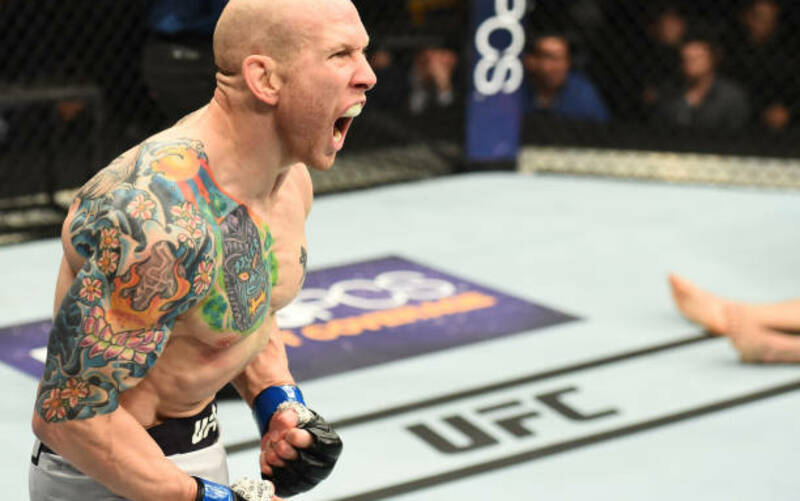 As indicated by Emmett on an Instagram post shared Wednesday, and later–confirmed by Nick Baldwin of Bloody Elbow–Emmett has signed a bout agreement to fight “T-City” at an undisclosed date in 2018. According to Emmett, Ortega has not yet signed the contract.

A relative unknown at the beginning of 2017, Emmett became an instant title contender at featherweight after taking a late-notice fight against Lamas in December, and usurping his number three ranking with a scintillating one-punch KO.

Though he attracted some criticism for coming in two and-a-half pounds over weight (148.5lbs), Emmett attributed the infraction to taking the fight on short notice (his second in his UFC career). And later revealed on the MMA Hour that it cost him 30% of his purse, and precluded him from winning a “Performance of the Night” bonus.

Ortega on the other hand has waged a similarly successful campaign in the featherweight division since failing a drug test for his debut in 2014. Since then he had scored consecutive finishes over the likes of Thiago Tavares, Diego Brandao, Clay Guida and Renato Moicano. In his last outing, this past December, he submitted Cub Swanson at UFC Fight Night 123.

If a fight between the next generation of featherweights takes place, it is likely that the winner could be next in line for a shot at the 145-pound title.

Max Holloway, the incumbent champion, will put his belt on the line at UFC 222 in March against former lightweight champion, and perennial featherweight contender, Frankie Edgar. Holloway won the undisputed title last June with a third round TKO victory over all-time great Jose Aldo. He posted his first defense of the title at UFC 218 in December, winning the rematch with Aldo in almost identical fashion.

Stay tuned to MMASucka for more updates as this story develops.