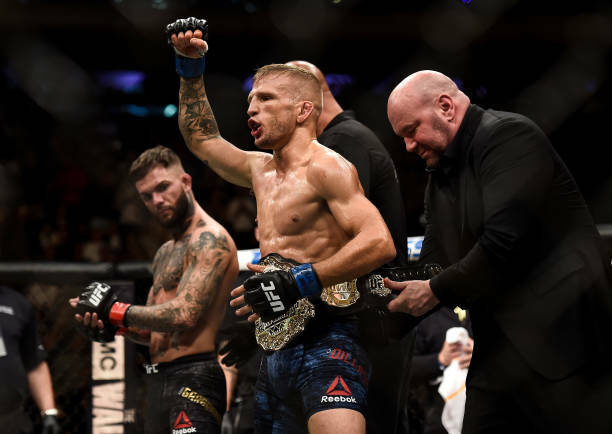 The UFC’s bantamweight division is stacked with talent, but in the last two years, three men have been on top of that mountain. Between 2016 and 2017, the title changed hands three times – the first time coming in January of 2016 when Dominick Cruz defeated TJ Dillashaw by a split decision to become the champion. Cruz went on to defend the belt once, until December 30, 2016 at UFC 207, when he took on Cody Garbrandt. He lost that fight by a unanimous decision, making Garbrandt the new king of the division.

Garbrandt’s first defense came against former champion, TJ Dillashaw at UFC 217 a few months ago. Dillashaw knocked out the champ in the second round of the fight becoming the champion once again. While all of that was happening, new stars began to emerge in the 135 pound weight class. Stars like Jimmie Rivera and Marlon Moraes have recently made themselves clear as legitimate threats to the new champion. With that being said, here are five fights that the UFC should consider putting on in the bantamweight division, the 2018 UFC Bantamweight Wishlist.

With the current champion, TJ Dillashaw campaigning for a title shot against the record holder for most consecutive title defenses, Demetrious Johnson, that could put the division on hold for a bit. Many believe Jimmie Rivera is next for a title shot, but with the division on hold, Rivera does not want to wait for the DJ-TJ mess to go away before he steps in the octagon again. Currently on a twenty fight win streak, in and out of the UFC, the UFC should consider putting Rivera in a fight against the former champ, Cody Garbrandt. Garbrandt, who was recently undefeated, won the title at UFC 207, after completely dominating Dominick Cruz en route to a unanimous decision victory. Garbrandt’s first title defense came on November 4 at UFC 217 against his former teammate, TJ Dillashaw. He lost his title that night by way of a second round TKO. While Garbrandt and Dillashaw settled their beef, Rivera was scheduled to face another former champion at UFC 219 on December 30. The man he was expected to face was Dominick Cruz. A few weeks out from the fight, Cruz had to withdraw from the fight due to a broken arm. This caused Rivera to begin to call out the new champ, but could not quite get the fight. Instead he was given a short notice fight with John Lineker. The bad luck continued with Rivera, though, because less than a week before him and Lineker were supposed to fight, Lineker was forced to pull out due to needing surgery on his tooth. Only six days out from the fight, the UFC could not find him a new opponent, and Rivera was pulled from the card. His most recent outing came at UFC on Fox: Weidman vs. Gastelum when he took on Thomas Almeida, winning the fight by a unanimous decision. With Garbrandt needing to defend his spot as the number one contender, it would make sense for the UFC to make this fight happen in 2018.

When he came into the UFC, former WSOF champion Marlon Moraes suffered a disappointing loss at the hands of Raphael Assuncao at UFC 212. Since then he has gone on to win two straight against former flyweight title challenger, John Dodson, and Aljamain Sterling. He defeated Dodson in November by a split decision and faced Sterling one month later at UFC Fight Night: Swanson vs. Ortega, defeating with a brutal knee less than a minute into the first round. With Cruz being inactive since December 2016 and currently nursing a broken arm, this fight could happen in mid 2018, unless Cruz is progressing well from his injury, then expect it sooner rather than later. It would be an exciting fight, as Cruz had dominated the 135 pound weight class for years before his loss to Cody Garbrandt, while Moraes was dominating the 135 pound weight class for the World Series of Fighting. With Cruz wanting another shot at the title, he will need to defend his position near the top of the rankings and stay active in order to get another title shot anytime soon. A win over Moraes could put him in position to rematch Dillashaw or the title at a later date. If Moraes can win, he puts himself either in contention for the title, or one more big win away from challenging for it. It would be an exciting fight and one that the UFC should definitely consider making at some point in 2018.

A fight between these two Brazilian veterans would make for an exciting with possible title implications. Neither of these fighters have fought for UFC gold, and a win in this fight could put them in position to challenge for their first title. It would be the classic grappler vs. striker matchup, with the heavy-handed Lineker and the Brazilian Jiu-Jitsu black belt, Assuncao. Although it could also make for a stand up war as Assuncao has only been knocked out once in his career and he has shown good striking in the octagon, most recently knocking out Matthew Lopez at UFC Fight Night: Poirier vs. Pettis. Lineker most recently faced Marlon Vera at UFC Fight Night: Brunson vs. Machida in October, winning the fight by unanimous decision. He was scheduled to fight Jimmie Rivera at UFC 219, but was forced to pull out for emergency tooth surgery. This fight would definitely make for an exciting one and it would be great on the UFC’s part to book this fight at any show in Brazil this year.

This fight would be a grappler’s dream, as both of these men are highly skilled on the ground, each with more than five submissions to their name. Sterling is a brown belt in Brazilian Jiu-Jitsu and Johns is a purple belt, but both have proved that they are very dangerous on the ground. Johns is currently undefeated, at 15-0, most recently facing Joe Soto at The Ultimate Fighter: A New World Champion. He won that fight quickly, completing one of the few calf slicers ever performed in the UFC. Sterling is currently coming off a loss, but is still a top ranked bantamweight and would be Johns’ toughest test during his UFC career. Sterling is 14-3, with his most recent wins coming against Augusto Mendes, and former bantamweight champion and former pound for pound number one fighter, Renan Barao. A win for Sterling could keep him in the top ten, while a win for Johns could cause him to climb the rankings and make his case for a much bigger name later in the year.

While Tim Elliot was included in the 2018 flyweight wishlist, staying in the bantamweight division would not be such a bad idea for him. He is a very exciting fighter who will put on a show against anyone he faces inside the octagon. Coming off season 24 of the Ultimate Fighter, Elliott has won two out of four, most recently defeating Mark de la Rosa at UFC 219. A fight against Almeida would be a fun fight, as Almeida is a promising up and comer in the 135 pound weight class. His two losses in the UFC are to the former champion, Cody Garbrandt, and to future title challenger, Jimmie Rivera. In his wins since joining the promotion, he has looked very exciting, with all four wins coming by way of knockout or TKO. His most recent win came at UFC Fight Night: Bader vs. Nogueira 2 when he took on Albert Morales and defeated him by TKO in the 2nd round. A win for Elliott could convince him to stay at 135 pounds as it would probably put him in the top ten and get him a bigger fight that could get him closer to a title shot. A win for Almeida could move him up the rankings a little bit and get him a bigger fight as well. If Elliott chooses to stay at bantamweight, the UFC should make this fight happen, assuming Almeida can defeat Rob Font in two weeks at UFC 220.

With the title changing hands on multiple occasions in the last two years, many contenders are making names for themselves. As the title is currently on hold with the current champ, TJ Dillashaw, campaigning for a title shot with flyweight champion, Demetrious Johnson, the UFC should consider making some of these fights, as they would be exciting and produce new faces for the champion when he comes back to defend the belt.