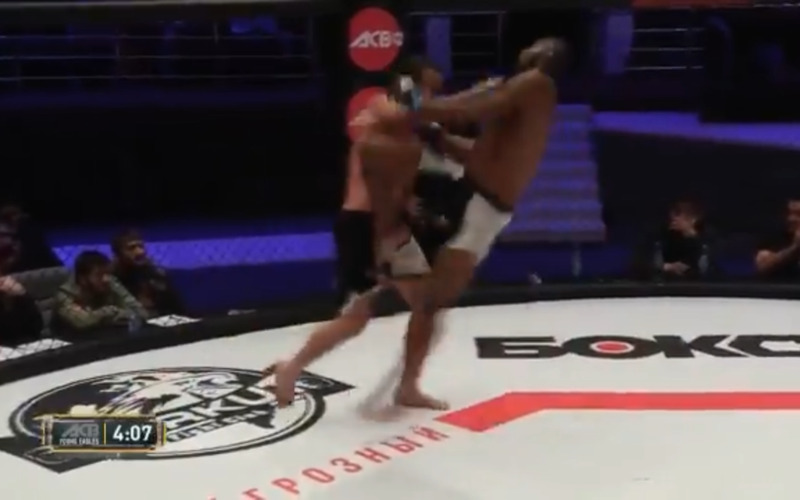 People have come to expect violence from these always stellar ACB shows, and today was no different!

ACB 78 will, however, mark the last time the promotion will hold a “Young Eagles” show. As the typically prospect-riddled Young Eagles events will now apparently become a separate promotion/entity.

Regardless, there was plenty of action to showcase. If you’re impatient, have no fear. ACB always uploads a very convenient quick video showcases all the finishes. Here is said video for ACB 78!

And if you have a bit more time on your hands, the promotion also uploads all of their fights – in full – to their Youtube channel. So check that our here.

In the night’s headliner, Russia’s Yusup Umarov looked to rebound from a September loss when he took on former Jungle Fight lightweight title-holder, Rander Junior.

Umarov rebounded emphatically, starching the Brazilian in just 16-seconds. The fight was so quick that commentator Frank Mir couldn’t even comment on it until after it had already ended!

OFFICIAL RESULT: Yusup Umarov def. Rander Junior via KO (Strikes) at 0:16 of Round 1.

In the co-main event, one half of ACB’s terrifying Raisov brother duo was given the biggest opportunity of his young career.

The young Russian not only managed to pick up the win against by far his toughest test to date, but he was able to stop him in the very first round!

OFFICIAL RESULT: Magomed Raisov def. Pat Healy via TKO (Strikes) at 1:37 of Round 1.

Despite less than 10 fights as a professional, Abdul-Rakhman Makhazhiev entered the show having most recently defeated a veteran of well over 60 fights in the form of Alonzo Martinez.

Though not quite as experienced as Martinez, Abdul-Rakhman Makhazhiev was given arguably an even tougher opponent in the form of France’s Damien Lapilus.

After some nice scrambles on the mat in round one, Makhazhiev was able to synch in an absolutely vicious calf-slicer to force the tap.

Abdul-Rakhman Makhazhiev improves to 6-4 whilst dropping the former BAMMA champ Lapilus’ record to 16-9.

Aliev entered the contest having won five-straight fights and across from him stood Barros rocking a six-fight win streak.

All it took was one nasty right-hand bomb from Aliev to put an end to that. Stopping Barros’ six-fight win streak while earning his own sixth win in-a-row.

OFFICIAL RESULT: Adam Aliev def. Ednilson Barros via KO (Strikes) at 0:57 of Round 3.

23-year-old Alan Gomes de Castro is one of Brazil’s finest prospects fighting out of the legendary Team Nogueira.

In October under somewhat controversial circumstances in Brazil, Gomes de Castro defeated Russia’s Shamil Akhmaev via third-round TKO in what was the Brazilian’s ACB debut.

The veteran ACB fighter Akhmaev was given a rematch, this time in his backyard.

Unfortunately for him, it didn’t change much. As Alan Gomes de Castro pounded out a virtually defenseless Akhmaev for yet another third-round win.

Gomes de Castro improves to a stellar 11-1-1 and picks up his third-straight finish. Akhmaev falls to 3-3 losing his last three fights after starting out a perfect 3-0.

That’s a quick recap of some of the most notable moments from the solid ACB 78 card. Check out the full results below which include some more great finishes and fights. Each result will be linked to their respective full fight video!

Yusup Umarov def. Rander Junior via KO (Strikes) at 0:16 of Round 1

Saifulla Dzhabrailov def. Sergio Soares via TKO (Strikes) at 0:43 of Round 1

Amir Alzhurkaev def. Diego Lopes via TKO (Strikes) at 3:03 of Round 2

Magomed Sulumov def. Bruno Roverso via TKO (Strikes) at 2:28 of Round 2

Adam Aliev def. Ednilson Barros via KO (Strikes) at 0:57 of Round 3

Adlan Mamaev def. Alberd Zhapuev via Submission (Anaconda Choke) at 4:38 of Round 3

Alan Gomes def. Rasul Saithozhaev via TKO (Strikes) at 4:45 of Round 3

Anzor Shakhmurzaev def. Anatoli Ciumac via TKO (Ref Stoppage) at 4:43 of Round 3

Andreas Stahl def. Usman Bisultanov via TKO (Strikes) at 1:24 of Round 1