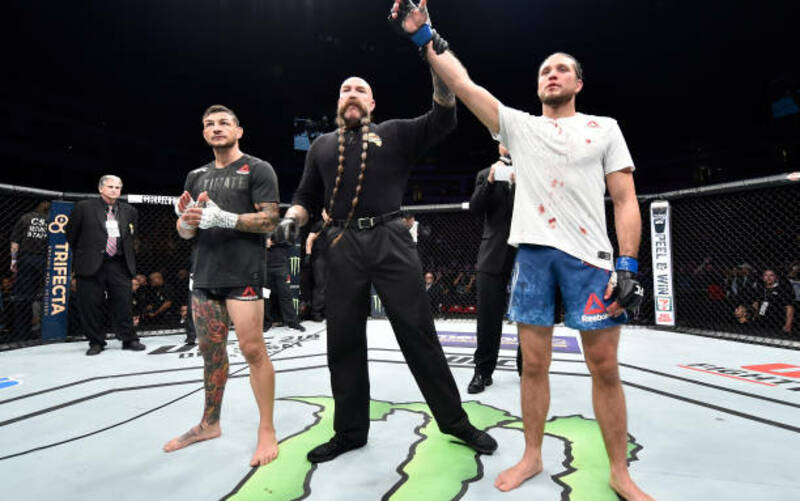 The UFC’s men’s featherweight division has arrived in the “Blessed Era” as Max Holloway has solidified himself as a legit champion after dethroning Jose Aldo at UFC 212, and then defeating him again the exact same way at UFC 218. Outside of Max Holloway, there are many great fighters in the 145 pound weight class that could make a run for the title in 2018, with breakout stars recently making a name for themselves. A couple of those stars being Brian Ortega, who is coming off a submission victory over Cub Swanson, and Josh Emmett, who is coming off a first round knockout over Ricardo Lamas. With many other talented fighters in this weight class, like Jose Aldo and Korean Zombie, here are five fights that the UFC should book during 2018. (Note: there will be no title fight on this wishlist, as there is already one booked between Max Holloway and Frankie Edgar at UFC 222).

Brian Ortega looked phenomenal at UFC Fresno back in early December in his performance of the night winning first round guillotine win over Cub Swanson. After this fight, many believed that Brian Ortega should either jump Frankie Edgar for a title shot, or get the shot after Edgar. He said in his post fight interview that he will let Edgar get the shot and wait for the winner. One week later, a new featherweight star emerged. Team Alpha Male’s Josh Emmett shocked everybody with a first round knockout over Ricardo Lamas that left him stiff on the canvas, all after accepting a fight on short notice after Jose Aldo withdrew to face Holloway at UFC 218. After this fight, Emmett had stated that he should face Ortega next with the winner being granted a title shot after the currently scheduled title bout between Max Holloway and Frankie Edgar at UFC 222 on March 3. Both fighters are coming off huge wins, they could even make a case as to why they should get a title shot now. But since there is already a title fight booked, the UFC should consider putting these two together in a fight that would guarantee a new challenger at featherweight. Unless the UFC allows Ortega to wait for the championship winner, expect to hear talk of this fight being possible.

Let’s all assume that the UFC is able to re-sign Cub Swanson after his final fight on his contract at UFC Fresno. Who should his return fight be against? Yair Rodriguez would be the perfect opponent. Having not fought since UFC 211 when he lost a one sided beating to current title challenger, Frankie Edgar, scheduling a fight against Swanson would excite pretty much anybody. If this fight were to be booked, it would definitely be an early fight of the year candidate, as both of these men are very crafty stand up fighters that refuse to go out without a fight. Both are coming off losses and a win could put either back into title contention. Before losing to Frankie Edgar, Rodriguez was the hottest prospect in the featherweight division. He was the most exciting fighter that had everybody talking about him. Before that loss to Edgar, he was on an eight fight win streak, in and out of the UFC, with notable wins against Dan Hooker, Andre Fili, and BJ Penn. Before Swanson’s submission loss to Ortega, he was on his own win streak of four fights with notable wins over Doo Ho Choi and Artem Lobov. Swanson is somebody that will always put on a show in any fight he is put in, most notably against Doo Ho Choi in 2016 at UFC 206. That fight was a slug fest. With both men coming off losses, and assuming that Swanson is re-signed, look out for this possible fight in 2018.

Assuming Michael Johnson can make featherweight for the first time this Sunday at UFC Fight Night: Stephens vs. Choi, and can also defeat Darren Elkins, a fight with Doo Ho Choi would be an exciting option. Let’s also assume that Choi gets past Stephens this Sunday as well. Choi is expected to be leaving after this year in order to serve his mandatory military time in South Korea, and wants a title shot before leaving. A win over Stephens could put him in the top ten, one or two wins away from a title shot, but a fight with former lightweight, Michael Johnson, would excite pretty much any fan. Both these men will put on a show for the ages, as anybody could remember, Johnson was one half of the 2017 fight of the year candidate between himself and Justin Gaethje. Choi was also one half of a fight of the year candidate in 2016 when he faced Cub Swanson at UFC 206. Putting these two on opposite sides of the octagon from each other gives us yet another early candidate for 2018’s fight of the year. They leave it all in the octagon when they fight, going for the kill at all costs, and rarely on the ground. They both have very strong knockout power, with the chance to put their opponent to sleep at any second of the fight. If both men can win this Sunday, this would be a very exciting fight that the UFC should definitely consider making during the new year.

If Jeremy Stephens can get past Doo Ho Choi this Sunday, a fight with Lamas could put him in the top five or just outside with win. Lamas may be coming off a loss, but has a very solid résumé to his name. He is a former title challenger that took Aldo the full five rounds during their title fight in 2014. He would be a very solid name for Stephens to add to his list of victories if he can defeat him. Jeremy Stephens is a knockout machine with some of the most powerful punches in the featherweight division, with 16 victories by knockout, including finishes over Rafael dos Anjos and Dennis Bermudez. Adding Ricardo Lamas to that list could put him in position for a title fight, or one win away from getting a shot at gold. He has a tough test this weekend though, as he will be in St. Louis to take on Doo Ho Choi. A win for Lamas could get him back on track for a shot at the title after losing to Josh Emmett a few weeks ago at UFC on Fox: Lawler vs. dos Anjos. He was formerly supposed to fight former champion Jose Aldo that night, but after an injury hit Frankie Edgar causing him to pull out of his title fight with Max Holloway at UFC 218, Aldo stepped in to face the champion. The UFC found a short notice replacement for Aldo to take on Ricardo Lamas. That was Josh Emmett, who missed weight before the fight. During the fight he displayed his power, knocking out Lamas in the first round. It was a tough setback for Lamas, but a comeback fight against Stephens could be good for him. Stephens has struggled with top notch competition during his career, so it would be a test for both of them.

If Elkins can pick up a win on Sunday against Michael Johnson, welcoming back The Korean Zombie from injury. Elkins has been on an exciting win streak lately, with notable wins over Dennis Bermudez, and a comeback of the year against Mirsad Bektic at UFC 209. Korean Zombie recently returned from his mandatory military service in February at UFC Fight Night: Bermudez vs. Korean Zombie. He defeated Dennis Bermudez that night with a brutal first round knockout. Zombie and Elkins both have exceptional knockout power and it would be a pretty exciting fight. Zombie is a former title challenger, who faced Jose Aldo in his last fight before needing to leave for his required military service. He lost that fight by a fourth round TKO, and when he returned to face Bermudez, many questioned if he had any ring rust and not look as good as he used to. What happened during that fight shocked many as Bermudez had been on a win streak beforehand. Unfortunately, after his fight with Bermudez, Zombie he was expected to face Ricardo Lamas at UFC 214, but blew out his knee and was forced to withdraw from that fight. When he returns in 2018, Darren Elkins would be a fun comeback fight for him that the UFC can hopefully put together depending on Elkins’ fight this weekend.

Obtaining a new champion in 2017, the featherweight division is witnessing the “Blessed Era”. There are many possible fights the UFC could put on that have an opportunity to shake up the rankings and give Max Holloway some new faces. These five would be the five best fights that the UFC could put on during the new year.