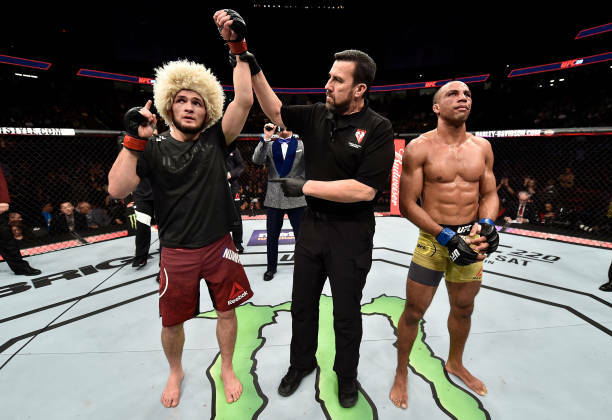 Being clogged up the way it has been for the last 14 months because of the current champions inactivity, the UFC’s lightweight division has been pretty crazy since the title changed hands at UFC 205 in November of 2016. When Conor McGregor won the belt that night, becoming the UFC’s first fighter to hold two title belts simultaneously, there was no more activity from the champion.

He went on to campaign for a fight with boxing legend, Floyd Mayweather, and finally got the fight in August 2017. During all that craziness, a lot of things happened in the division he has control of. Justin Gaethje made his debut and immediately made a name for himself with a fight of the year candidate against Michael Johnson at The Ultimate Fighter: Redemption Finale. Kevin Lee burst into the rankings and even earned an interim title shot against Tony Ferguson at UFC 216.

Al Iaquinta returned from his two year absence with a first round knockout over Diego Sanchez at UFC Fight Night: Swanson vs. Lobov. And of course, at the end of the year, Khabib Nurmagomedov made his return and demolished the best striker in the lightweight division, Edson Barboza, at UFC 219. With all of this occurring last year, here are five fights that the UFC should make in the 155 pound weight class during 2018. This is the UFC Lightweight Wishlist for 2018.

#1: Tony Ferguson vs. Khabib Nurmagomedov for the undisputed title

It is time for the UFC to strip Conor McGregor of the lightweight title after 14 months of inactivity and clogging up the 155 pound weight class. The UFC needs to make the much anticipated fight between Tony Ferguson and Khabib Nurmagomedov, but none of this defending the interim title nonsense, it has to be for the undisputed title. This is the fight everybody wants to see and it is the fight we almost got at UFC 209 until a late night hospital trip for Khabib ruined it. The two have been scheduled to fight three times during their careers, with Khabib needing to pull out twice and Ferguson pulling out once. When they were scheduled to fight at UFC 209, it would have been for the interim title, but the fight was cancelled after Khabib could not weigh in. Instead, Ferguson went on to face Kevin Lee at UFC 216 for the interim title, winning the fight by third round triangle choke. He wasted no time in calling out “McNuggets” during his post fight interview with Joe Rogan. The fight was rumored to happen at UFC 219 on December 30, but after McGregor’s rampage inside the Bellator cage at Bellator 187, Dana confirmed that he lost the opportunity to be on that card. That same night came the return of Khabib Nurmagomedov, having not fought since defeating Michael Johnson at UFC 205. He returned to fight Edson Barboza, the best striker in the lightweight division. He mauled Barboza, destroying him with ground and pound on his way to a unanimous decision victory (30-25, 30-25, 30-24). If the UFC can go through with stripping McGregor of the title, this fight would be booked immediately as it is the only fight that makes sense for the lightweight title picture. Expect to see this fight in 2018 if Conor is stripped.

In a recent interview with Ariel Helwani on the MMA Hour, Justin Gaethje described Kevin Lee as a “loudmouth” saying, “I just like punching loud mouths in the face”. A few days later, Lee appeared on MMA on SiriusXM to talk about his next fight and said, “If it’s going to be against Justin, I like easy money”. Also according to Justin, the two exchanged words last May before the UFC’s Summer Kickoff Press Conference during the week of UFC 211 in Dallas. Justin Gaethje was in a pair of fight of the year candidates during 2017, one coming during July against Michael Johnson, and one in December against former champion, Eddie Alvarez. Gaethje is known for putting on exciting fights because of the kind of style he fights with. He puts himself in danger multiple times during a fight, eating shots that hurt him, but he says that those shots bait his opponent to close the distance so he can land his own fight ending punches. Coming off of the war he had with Eddie Alvarez at UFC 218, he should consider taking a little bit of time off to recover, but a fight with Lee would be a good one for him to return with, and it would excite the fans. Kevin Lee recently burst onto the scene during 2017. He was not ranked going into the year, but a win over Francisco Trinaldo at UFC Fight Night: Belfort vs. Gastelum in March, he earned himself a number next to his name. He went on to headline his first UFC card against Michael Chiesa on June 25. He won that fight by a first round submission, earning himself another headliner. That fight was against Tony Ferguson, who was on a nine fight win streak going into that fight. The fight would be for the interim lightweight title. The fight took place at UFC 216, with Lee losing in the third round by a triangle choke. A fight with Justin Gaethje would be exciting, as both fighters are good on the feet, with good ground games to their names as well. Expect these two to continue trading words and eventually getting to face each other in 2018.

Eddie Alvarez may be thinking he should get a title shot sometime soon, but with the chaos in the top 3 of that division with Conor McGregor, Tony Ferguson, and Khabib Nurmagomedov, that may not be happening anytime soon. A fight with Edson Barboza could put him in an even better position for another title shot if he were to win. Although Barboza is coming off a loss, he is still the best striker in the lightweight division. He holds many knockouts and TKOs to his name, and a stand up brawl with Eddie Alvarez would escite pretty much anyone. Alvarez claims he is currently the “Most Violent Man in the UFC” after his third round knockout over Justin Gaethje at UFC 218, in what could have been the fight of the year. The former champion is not backing down from any challenge he is given. Edson Barboza’s last lost came at UFC 219, to the most dominate man in the UFC, Khabib Nurmagomedov. He was dominated throughout the whole fight, losing every round badly on his way to a unanimous decision defeat. He’s already made it clear in a recent Instagram post that he is ready to return after the disappointing loss to Khabib, and a comeback fight against Alvarez would be very exciting. Both guys are world class fighters, and if either can get a win, that would put them in position to state their claim for a title shot in the future against whoever may be champion when that time comes. If the UFC can book this fight, even though Barboza is coming off a loss, it would be an entertaining fight that could possibly be considered as fight of the year by the end of the year.

After losing two straight to current featherweight champion, Max Holloway, Aldo should consider a move up to the 155 pound division. He may be inching towards the end of his career and a move up to lightweight may not be the best decision for him, but there is a fight at 155 that fans have been dying to see for years, one that was confirmed for UFC 163, but the other half pulled out with a knee injury. That other half was former lightweight champion, Anthony Pettis. While both these fighters may be past their prime, with Aldo losing his past two and Pettis losing his last two of three, it would still definitely excite the fans. In their prime, Aldo had won 18 straight, holding the WEC and UFC featherweight titles during that streak, and Pettis was the UFC lightweight champion after defeating Benson Henderson and defending it once against Gilbert Melendez. When this fight was announced for UFC 163, it was a fans dream, as both of these men were highly talented fighters that would have put on a show if they ever got to the octagon, but Pettis injured his knee and was forced to pull out of the fight. He was replaced by Chan Sung Jung, and after that, the fight never really came close to being confirmed again. After a quick recovery, Pettis faced Benson Henderson at UFC 164, winning the fight and the lightweight title. He went on to defend it one time before losing it to Rafael dos Anjos at UFC 185. However, Aldo went on to defeat Jung that night and then went on to defend his belt two more times, against Ricardo Lamas and Chad Mendes, before losing his title to Conor McGregor at UFC 194. Fans have been wanting to see this fight since the first time they were supposed to meet, but after it fell through, now would be a perfect time for the UFC to make it happen, but instead of Pettis dropping to 145, move Aldo up to 155.

Nate Diaz has not stepped foot in the octagon since his majority decision loss to Conor McGregor at UFC 202 in August of 2016. Since then he has stated that the only fight that will get him to return to the octagon is a trilogy fight between himself and Conor, unless he gets paid millions for his next fight. He almost returned at UFC 219 against current welterweight champion, Tyron Woodley, but the fight never materialized after Diaz demanded that he make $15 million for that fight. Since then we have not heard much from the younger Diaz brother. Although this fight probably will not be the one to bring him back, everyone wants to see him back in the octagon. A fight with Dustin Poirier would be a fun fight for his return. Poirier is coming off a TKO victory over Anthony Pettis at UFC Fight Night: Poirier vs. Pettis, winning that fight after Pettis suffered a rib injury in the third round. He has been campaigning for a rematch with Eddie Alvarez since their no contest fight at UFC 211, but Alvarez seems like he has moved on and it is time for Poirier to start looking at some other options. A fight between Diaz and Poirier would be an exciting fight and it should be put together during 2018 if Diaz chooses to return against anybody, which probably is not that realistic, but we can all hope it happens.

With the title picture being chaos during the past two years, there is a list of contenders since Conor McGregor won the tite at UFC 205. Every one of those fighters have been calling out the champ, stating that he needs to defend the title to unclog on of the best divisons in the UFC. If he never comes back, the most important fight in the 155 pound weight class needs to happen, that fight is Ferguson-Nurmagomedov for the undisputed UFC lightweight world championship.