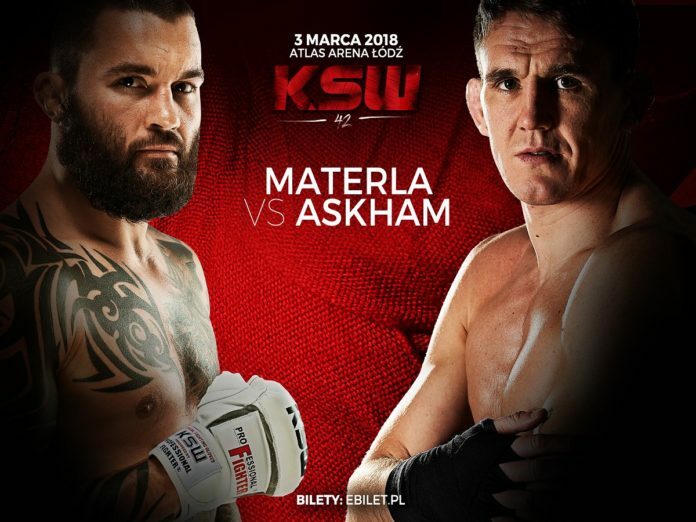 KSW has announced another fight for their stacked KSW 42 show in March.

One of the promotion’s top draws and best talents, Michal Materla returns yet again to take on UK star Scott Askham.

Michal “Cipao” Materla (25-5) has long been considered one of the very best under the KSW banner. With a stellar record of 16-3 in the promotion, the KSW legend is a former longtime middleweight champion.

After multiple title defenses against the likes of Kendall Grove, Jay Silva, Rodney Wallace, and Tomasz Drwal, he faced another KSW legend in the form of Mamed Khalidov. He and Khalidov together had been without question the best middleweights on the roster for years, but the friendship between the two made the fight difficult to book.

In November of 2015, it finally happened. Michal Materla was finished by Khalidov in just over 30-seconds, losing his title in the process. He followed it up with a perfect 2016, going 2-0 and picking up knockouts against Rousimar Palhares and Antonio Chmielewski. After taking a year off, Materla returned in October of 2017 and knocked out UFC veteran Paulo Thiago.

UK veteran Scott Askham (15-4) signed with the UFC in 2014 immediately after winning the BAMMA and UCFC middleweight titles. He entered the promotion with a perfect record of 12-0. After amassing a 2-4 record within the company, Askham was promptly released from the promotion following a controversial split decision loss to Brad Scott.

He then signed with ACB to headline their stacked ACB 70 card in September of 2017, taking on Luke Barnatt in one of the biggest fights in UK MMA history. Askham was aggressive throughout to earn a split decision win, setting him up for this phenomenal opportunity against one of Poland’s finest at KSW 42.

KSW 42 is set to take place in Lodz, Poland on March 3 live from the Atlas Arena.

The main event was announced last week, and man is it ever a good one! Go here for more info on the card and stay tuned for more announcements in the very near future.