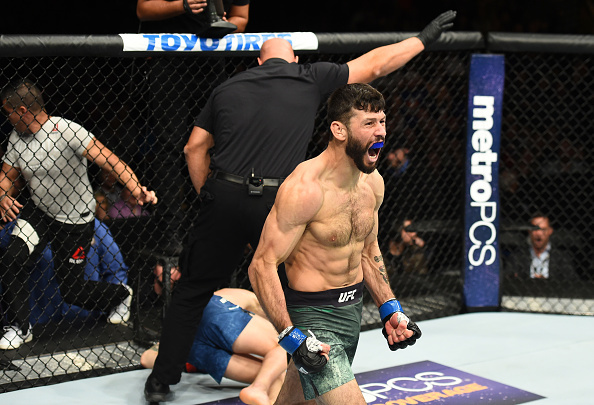 The UFC’s first trip to St. Louis, Missouri was full of many spectacular performances. Two new stars at featherweight have shown why they belong at the top of the ladder at 145. There was also a 60-second knockout and a battle in the main event. It is time to look back at UFC Fight Night 124: Stephens vs. Choi and see who had the most spectacular performances from the UFC’s first event of 2018.

Earning his contract into the UFC after a good performance on Dana White’s Tuesday Night Contenders Series, Matt Frevola was thought of as a very promising prospect. He could have been the next big thing. Marco Polo Reyes had other plans. Connecting with a hard left hook early in the fight that knocked Frevola’s mouthpiece out, and then sticking to him with constant pressure. After the fight was paused to get Frevola’s mouthpiece back, Reyes continued with the relentless pressure. One minute into the first round, Reyes connected with a hard right hand that shut the lights out on Matt Frevola. Marco Polo Reyes made it clear that he should never be overlooked, and he now poses a threat to anyone in the lightweight division.

It was a fight that could have gone either way, with both fighters being extremely well-rounded on the feet. Jeremy Stephens and Doo Ho Choi put on a show in the first round of their five-round main event. They both connected with hard shots that would put many other fighters out. These two are special. They are built for war, with dynamite in their fists. They could finish the fight at any moment.

The second-round started off with Doo Ho Choi throwing a hard front kick to the face that clearly stunned Jeremy Stephens, but Stephens didn’t stop. He pressured Choi, eventually landing a hard strike of his own that knocked the Korean Super Boy down. He followed up with hard strikes to the grounded Choi that bounced his head off the mat, and then finished the fight with multiple elbows to the head of the covered up Choi. There was a new threat to the 145 pound division and Stephens wasted no time in letting the world know he wanted to fight undefeated Brian Ortega with the winner getting the next crack at the champion, Max Holloway.

#3: Darren Elkins def. Michael Johnson via Submission (Rear-Naked Choke) at 2:22 of Round 2

Michael Johnson was finally making his featherweight debut against a tough Darren Elkins. Elkins never quits, no matter how bad he is losing the fight. Elkins was coming into the fight with a five-fight win streak to his name.

In the first round, Johnson let him have it, throwing hard shots at Elkins and connecting with many of them. At the end of the first round, Elkins was bloody and clearly down 10-9, if not more. But Elkins doesn’t care about the scorecards as he is known for coming back in fights he is clearly down in. He went into the second round and got Johnson to the mat. He eventually got his back and was able to sink in a tight rear-naked choke that forced Johnson to tap, giving Elkins his sixth straight win.

Elkins went to the mic during his post fight press conference and called for a number one contender fight, with no specific opponent. The featherweight division has no short list of contenders that could fight Elkins in a number one contender fight. Elkins has deserved his chance, and with one more win he could be challenging for the featherweight title late this year or in early 2019.

#4: Kyung Ho Kang def. Guido Cannetti via Submission (Triangle Choke) at 4:53 of Round 1

After about three and a half years of mandatory military service in South Korea, Kyung Ho Kang came back with virtually no ring rust. He made easy work of Guido Cannetti in the first round as he tied up a triangle choke late in the first and finishing it with seven seconds until the horn. With a big win and a spectacular performance after being gone for so long, it could mean he sees big fights in his future as he looks to climb the ladder that is the bantamweight rankings. The bantamweight division has tons of talent, and a rising star like Kang could add to that already stacked list.