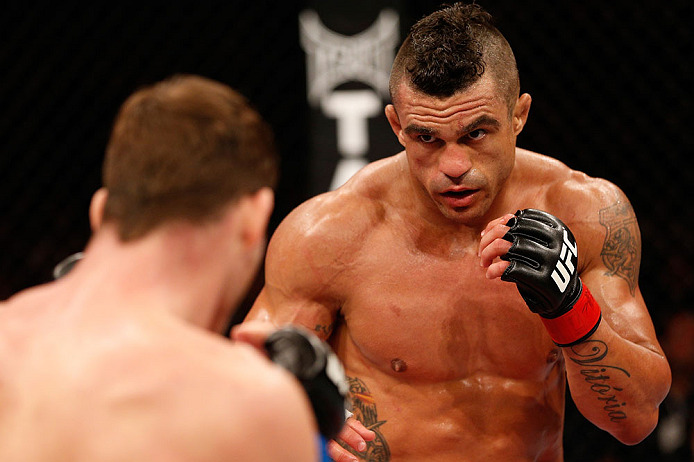 After losing out on an opportunity to fight his last fight at UFC Fight Night 124 this past weekend, Vitor Belfort had one request — to fight Michael Bisping in London. Well that will not be happening, and Belfort calls Michael Bisping scared for not accepting the bout.

“What a shame @mikebisping!!! @ufc just informed me that you have declined the fight. I understand you are scared. The images above pretty much explain it all.”

What a shame @mikebisping !!! @ufc just informed me that you have declined the fight. I understand you are scared. The images above pretty much explain it all… So stop pretending that you are tough and just admit that you are afraid. And I thought you were man enough to step up in the octagon with me again, my mistake… unfortunately looks like we will not be delivering to the fans the fight they want to see… Happy retirement, you must be feeling amazing leaving the sport thru the back door… To be a legend is not to everyone! Que vergonha @mikebisping !!! O @ufc acabou de me dizer q vc recusou a luta. Eu entendo que vc está com medo. As imagens acima meio que explicam tudo… Então para de fingir que é durão e admite que está com medo. E eu pensei que fosse homem suficiente para subir no octógono comigo outra vez, me enganei… Infelizmente parece que não iremos dar aos fãs a luta que eles querem… Feliz aposentadoria, vc deve estar muito feliz por deixar o esporte pela porta dos fundos… Se tornar uma lenda, realmente não é para qualquer um.. #teambelfort

The two had previously fought in 2013 and Belfort earned a second round TKO, but Bisping suffered a detached retina in the process. At the time, “The Phenom” was taking testosterone replacement therapy (TRT).

Hoping for a retirement bout on both sides was what Belfort requested. However, this will not be happening and the two will have to find new foes.