On this week’s massive episode of The Ragin’ MMA Podcast, Kajan Johnson and his co-host, ET Canada regular Shakiel Mahjouri, catch up with arguably the best active MMA fighter in all of Canada, Rory MacDonald.

Discussing his ambition to compete as an alternative in the Bellator Heavyweight Championship Grand Prix, MacDonald reveals, “Yeah, [Scott Coker] is keeping an open mind.” Taking a look at the brackets, “Red King” breaks down his potential competition. “Any of the smaller guys, like Chael Sonnen, are very beatable fights for me,” explains MacDonald. “Obviously the guys like Roy Nelson and Matt Mitrione… those would be a bit of a stressful situation.”

Looking back on a successful 2017 for MacDonald, the fighter points out his victory over Paul Daley as his biggest highlight of the year: “The Paul Daley fight was huge for me… everything felt like I got my career back on track. My life is back on track.” But 2017 was not without its problems and for MacDonald the most disappointing thing about the past 12 months falls on the shoulders of one person.

“The low-part of the MMA world is Colby Covington and the fact that he is getting so much attention,” chuckles MacDonald. “It’s a sad time for the MMA world.”

Stay tuned right here at MMA Sucka for more live streams as well as videos highlighting the top fighters, commentators, coaches, promoters and other names in MMA and combat sports. We also bring you great offers on the latest MMA products and merchandise. You can also subscribe to our YouTube channel for regular updates and all the latest fight news. You can also check out our sister sites, the Last Word on Sports Network for a look at news, rumours, analysis, and editorials on major sports from around the world. 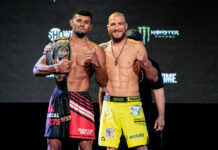