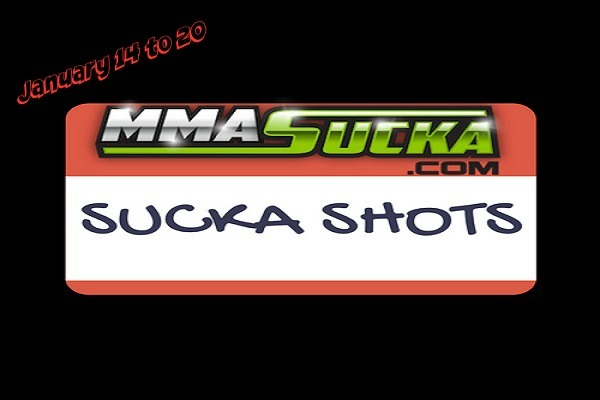 We have an all new edition of Sucka Shots for January 14 to 20. In a week that consisted of two major events from the world leaders in MMA—Bellator 192 and UFC 220–there was still much to talk about in the sport unrelated to those shows.

This week, Senior Editor Jason Burgos took a look at several stories covered by MMASucka, as well as general news from around the sport. Firstly, he took time to mention the two informative reads from Michael DeSantis covering upcoming events from Shamrock FC. A promotion offering a lot of up and coming talent in the sport.

From their he took a look at two stories involving Vitor Belfort (fighter payouts) and Cynthia Calvillo (USADA violations), and then analyzed the fallout from both.

Towards the end of the week, MMASucka founder Jeremy Brand reported the announcement of a lightweight title fight between interim champion Tony Ferguson and Khabib Nurmagomedov. Also, word came out about Dustin Poirier facing Justin Gaethje in the headliner of the April 14 UFC on Fox event. Burgos spoke on both and what they mean for the division.

Of course, the finale of the show focused on the results from UFC 220 and Bellator 192. Who won the co and main event bouts, and what could be coming next for those combatants? He covered it all and then some.

Of course, the finale of the show focused on the results from UFC 220 and Bellator 192

The music used on the show is from the artist Psychic Power, and it is the song “Slow Driver.” The track comes via the free music archive.