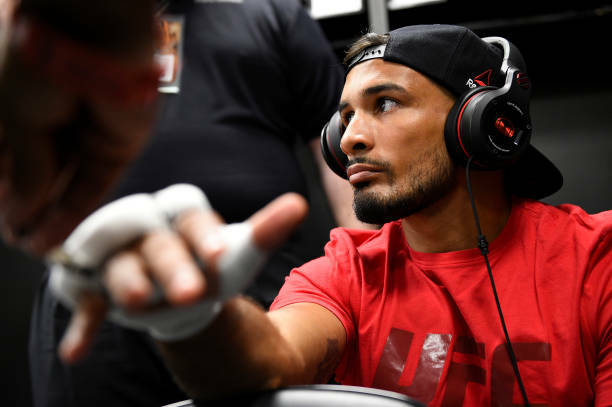 You learn a lot about a man when you watch him drink two bowls of pure lemon juice. In May of 2016, UFC featherweight Dennis Bermudez (16-7) broke a Guinness world record by sucking one litre of lemon juice through a straw in just 22.75 seconds. On his first attempt, Bermudez finished in 20 seconds, but was disqualified for having a small amount left in his bowl. Upon learning he would have broken the record, Bermudez demanded a refill, because that’s what kind of guy he is.

In folkstyle wrestling, NCAA Division I competition is the pinnacle. In a sport where many start from early childhood, only a select few will have the results required to be noticed by college coaches. And even fewer will go on to have any degree of success. Like fellow MMA standout “King Mo” Muhammed Lawal, Bermudez is an outlier, in that he did not start wrestling until high school. He went from having a losing record his redshirt freshman year, to achieving a top-25 ranking and freestyle All-American honors by his junior year.

This kind of trajectory is due to the incredible work ethic, athletic ability and drive possessed by “The Menace.” Since making his UFC debut in 2011, Bermudez has gone from a pure wrestler with power in his hands, to a dynamic mixed martial artist with a dangerous, flowing striking game.

Training out of Bellmore Kickboxing in New York, Bermudez has been involved in some of the most memorable fights in UFC featherweight history. His 2013 chaotic war with Matt Grice will go down as one of the greatest bouts of all time, the two standout wrestlers chose to stand and sling hands for three rounds.

After losing his UFC debut, Bermudez went on a seven fight win streak, including a decision win over current champion Max “Blessed” Holloway

Aside from his outstanding and improving wrestling game, Bermudez has thrilled fans with his ridiculously aggressive striking style for years. Check out some of his best moments, along with his world record setting performance. The latter is both impressive and hilarious.

https://vimeo.com/250330263 (My excellent highlight has been removed due to copyright violations, RIP.)

At his best, Dennis Bermudez is fearless. Throwing combinations in bunches, he can be seen ending with low kicks that one could call graceful. His come-forward action style is bolstered by a strong clinch game, dangerous knees and effective pressure from takedowns.

If there is a knock on Bermudez, it’s his defense, especially on the lead. He’s often too wild and exposes openings. In fact, his most recent loss to the indestructible Darren Elkins is his only UFC loss where the finish did not come from Bermudez being caught with an opportunistic strike or submission. Bermudez consistently engaged in a slow, grinding fight against the cage, despite the obvious success he had in striking.

In his upcoming bout with Team Alpha Male’s Andre Fili, fans will not have to worry about a boring fight

In his upcoming bout with Team Alpha Male’s Andre Fili, fans will not have to worry about a boring fight. Both men like to come forward, throw caution to the wind, and let fists, feet, knees and elbows fly. Look for Bermudez to push an intense pace, mixing in high amplitude takedowns, and clinch striking to wear down his younger, less physical opponent.

You can watch Dennis Bermudez vs. Andre Fili in the co-main event slot at UFC on Fox: Jacaré vs. Brunson on Saturday, January 27th.