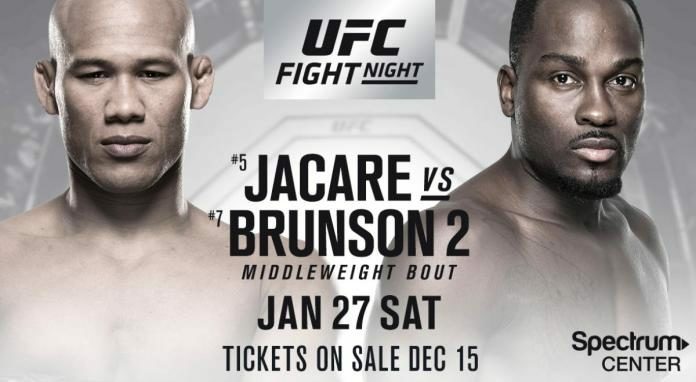 The UFC returns to Big FOX this week with UFC on FOX 27! The event goes down live at the Spectrum Center in Charlotte, NC. The main event is a middleweight bout between perennial Top Ten fighters Renato “Jacare” Souza and Derek Brunson. All over the card, people are wanting to make a mark with promoters and fans. Very few ways remain to do so, which is why a unique entrance music is of the utmost important. That’s why I’m here. As MMASucka.com‘s resident musicologist, I’m here to offer suggestions that would help these fighters find better UFC on FOX 27 walkout songs. I’m even doing it publicly, for your entertainment. So, without further ado, here… We… Go!

What he last walked out to: “Coming Home” – Diddy feat. Skyler Grey

What he should walk out to next: “Lord Intended” – De la Soul feat. Justin Hawkins

As I said back in the UFC Fight Night 123 edition of the Walkout Consultant, “Coming Home” has been used way too much by way too many fighters. It is the exact wrong song for a fighter like Niko Price to walk out to, because it only serves to make him blend into the background further. No, “The Hybrid” needs a song that will make people stand up and pay attention. The rock/hip-hop stomp of De la Soul’s “Lord Intended,” with its confrontational lyrics and swaggering groove enhanced by The Darkness frontman Justin Hawkin’s crunchy guitar and backing vocals is just the ticket. Listen below.

What he last walked out to: “Eye of the Tiger” – Survivor

What he should walk out to next: “Crank the Volume” – Viking Skull

It is clear that finish artist Frank “The Crank” Camacho needs something driving and motivational to walk out to.  After all, that description describes the ubiquitous – and frankly cliche at this point – “Eye of the Tiger” to a tee. However, a fighter should want to stand out, too. So, to that end, I’d like to bring “Crank the Volume” by hard rockers Viking Skull to the table for Mr. Camacho. A raucous, galloping tune filled with confidence that would suit the hard-hitting “Crank” quite well. Listen below.