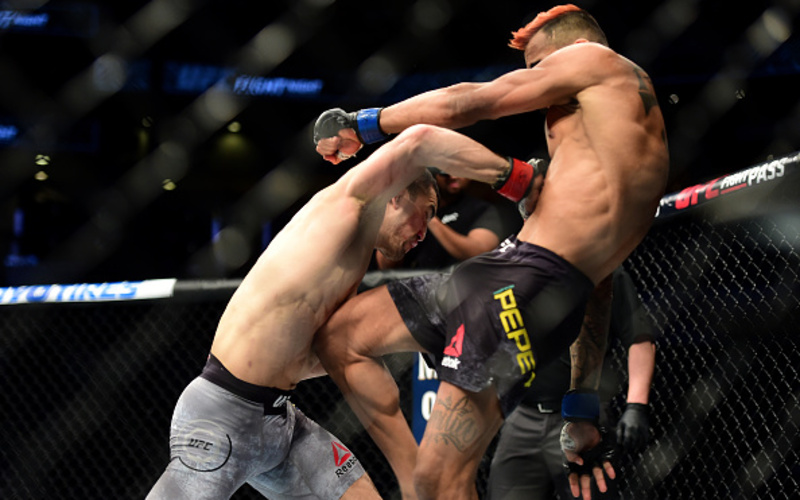 UFC on FOX 27 (UFC Charlotte), is in the books and now it is time for the audience to evaluate. There were several preliminary fighters that failed to deliver much entertainment. However, the card really got rolling after Mirsad Bektic “punched a hole through his chest” breaking the decision streak of the Fox Sports 1 prelims.

After every fight night, fans take stock of which fighters left particularly positive or negative impressions, shifting their support for the future. Let’s review some of the standouts from Saturday night, in grade order.

Here’s how this fight played out. In the first round, Dober was hit with two sweet trip takedowns and controlled on the ground. Dober then decided it was the right move to immediately start the second round by grappling. But Frank Camacho began to tire, and Dober delivered a barrage a punches to Camacho’s chin, which we all now know is made of rubber.

However, the fresher fighter became tempted to headhunt, Camacho recovered and hit another gorgeous takedown to take top position at a crucial moment in the third round. The reason this fight was entertaining was because Camacho gassed out, and Dober continued to make huge mistakes tactically. With some fans likely still on the fence following a controversial decision, Dober then declared it fight of the night. A lot of conflicting emotions here.

(+) Gutsy performance, if nothing else.
(+) Acknowledged boos, politely addressed controversial decision.
(-) Made a lot of mistakes.
(-) The fight was entertaining due to major flaws in each fighter.

Pichel has detailed his struggles with injuries that kept him out of the cage for almost three years. The fight itself was largely timid, but Pichel closed with a thoughtful interview.

“From Hell” (A nickname given by his mother) gave a lot of props to his opponent Joaquim Silva, and incorrectly referred to the fight as “action packed.” He then informed the judges that no one trusts them, and that no one should. Pichel followed up that scorcher with a call-out of real estate agent Al Iaquinta. Just one fight later, began a night punctuated by horrible judging, well played.

(+) Predicting (causing?!) a night of bad judging.
(+) Quality callout, the banter would be legendary.
(-) Pretending the fight was entertaining. Be real Vinc.
(-) It takes two to tango, but Pichel was timid most of the fight.

Sometimes commentators refer to the “feeling out” process, but it often means two fighters are staring at each other. After a three minute feeling out process, Jacare uncorked a stiff head kick that clipped Derek Brunson through his guard.

Like a dang action hero, Jacare walked towards a stumbling Brunson and nailed him with a series of punches as he bounced back off the cage.

HE'S BACK! @jacaremma gets a huge TKO win with the head kick on Derek Brunson! #UFCCharlotte https://t.co/qQnOuNcuJO

Jacare didn’t do much with his post-fight interview, but it was a big win that saved his title aspirations for now.

(+) Notching a highlight-reel win over a younger, ranked opponent.
(+) Having the cojones to switch up training later in his career.
(+) Just being a happy, good dude.
(-) Didn’t use the interview well. Did get a “Nortch Caroline” out of it.

After suffering a dramatic upset to now contender Darren Elkins, there was a lot to prove in a dangerous matchup for Mirsad Bektic. Bektic timed a Godofredo Pepey knee strike and disintegrated all of his vital organs with a laser powered straight to the body.

(+) Breakin’ a fool’s chest
(-) Unfocused in his interview

Bobby Green and Erik Koch (A+)

In a battle of journeymen lightweights, it was all Erik Koch early. Using tight, powerful kickboxing and forward pressure, Koch out landed, took down and controlled Bobby Green in the first round. Green came to life in the second round, and the two exchanged blows, Koch leaving bloodied. The third round featured exchanges on the feet, takedowns, and multiple reversals.

It was a back and forth war, a great night for two men who have under-performed in their UFC careers. Bobby Green’s interview featured a shout out to his children, and an offer to fight either Eddie Alvarez or Kevin Lee in place of Nate Diaz, who we have learned is his cousin.

(+) Green revealed himself as a Diaz brother
(+) Koch finally put together a strong three round performance at LW
(+) Putting on a well rounded, action fight.

This sport is more fun when you have favourites, choose your allegiances.