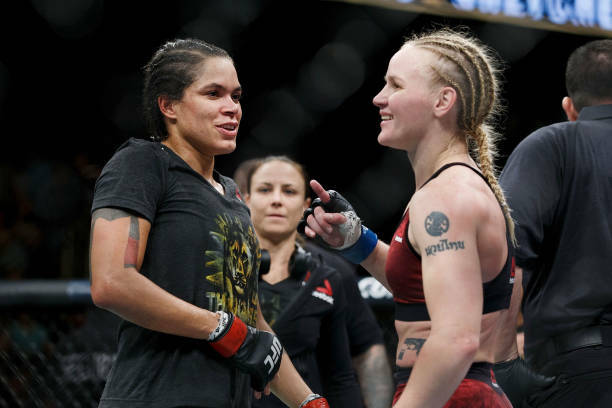 Just when you thought women’s MMA in the UFC was becoming predictable, 2017 decided to pull up a few trees and prove us all wrong.

Firstly, the UFC decided to create a 145-pound weight-class. Despite the woman they made the division for wasn’t ready to compete for the title at their chosen date of UFC 208 in February. Cris Cyborg ended up sitting on the sidelines while bantamweights Holly Holm and Germaine de Randamie slugged it out for the belt.

De Randamie won a highly contentious decision victory, and promptly surrendered the title rather than fight Cyborg. In the end, the belt ended up with the woman it was created for anyway. Cyborg claimed the vacant title against Tonya Evinger in July, and went on to defend it against Holm in December.

Strawweight would be straightforward though, surely? Not so much. Joanna Jedrzejczyk produced an imperious title defence against Jessica Andrade at UFC 211. As she moved a step closer to breaking Ronda Rousey’s record for women’s title defenses.

The Pole would form part of the company’s most stacked card of the year when she took on Rose Namajunas at Madison Square Garden in November. She was a huge favorite. Predictable? Nah. A lightning Namajunas flurry later and the 115-pound weight-class was turned on its head.

So, here I am making the foolish decision to try and predict how the UFC’s women’s weigh-tclasses will end up by the end of this calendar year. Good luck to me.

Rose Namajunas’s first round knockout of former strawweight champion Joanna Jedrzejczyk at UFC 217 in November was without a doubt the upset of the year. “Thug Rose” came into the bout as a huge underdog, with “Joanna Champion” looking to make her sixth consecutive title defense. The challenger had other ideas, however.

Namajunas twice knocked Jedrzejczyk down in the first round, with her second flurry bringing an end to the contest. The crowd at Madison Square Garden was audibly shocked. While the astonishment expressed by commentator Daniel Cormier’s exhilarating cries of “THUG ROSE” resonated with every fight fan watching at home.

A monumental upset it was, but one that this writer believes will be reversed when the two rematch in the first quarter of 2018. Joanna’s stellar run as champion entitles her to an automatic rematch, which she will get back in New York at The Barclay’s Center in April.

Jedrzejczyk will have learned her lessons from the first fight, and won’t allow herself to slip into complacency again. She’ll stick and move to a wide decision victory, reclaiming her strawweight crown and her place as one of the best female fighters of all-time.

It’s likely she would go on to make the first defense of her second reign in the autumn, probably against the winner of the Jessica Andrade vs. Tecia Torres bout scheduled for the end of February. Another unanimous decision win there, and “Joanna Champion” closes out the year back atop the UFC’s 115-pound division.

The winner of the most recent season of The Ultimate Fighter, Nicco Montano, was crowned the UFC’s inaugural flyweight champion last month when she defeated late replacement Roxanne Modafferi in Las Vegas. However, she is essentially viewed as the Carla Esparza of the flyweight division: a reality-TV produced champion who will soon make way for a more elite-level titleholder.

That elite-level titleholder will be none other than one-time bantamweight title challenger Valentina Shevchenko. The 29-year-old is currently preparing to make her debut in the new division against promotional newcomer Priscila Cachoeira in Brazil next month. And there will be few betting against “Bullet” in that match-up.

Provided she comes through that test there is little to stop Shevchenko from claiming the flyweight crown for her own. A tremendous technical fighter, she holds victories over the likes of Sarah Kaufman, Holly Holm and Julianna Pena, while the only woman to beat her in the UFC is bantamweight titleholder Amanda Nunes.

Montano may well be given a (respectfully) softer assignment for her first title defense. Perhaps Sijara Eubanks who was supposed to face Montano for the belt before health issues got in the way. Though it’s exceedingly likely that by years end Shevchenko will have wrested control of the new division away from the American.

If you believe everything Dana White says, and most right-minded people don’t, then you’ll be eagerly awaiting the announcement of a champion vs. champion bout between bantamweight incumbent Nunes and featherweight queenpin Cris Cyborg, for the latter’s title. This, according to White, is what the UFC has in mind for Cyborg following her unanimous decision victory over Holly Holm last month.

That would leave the bantamweight title picture somewhat murky, what with the champion spending half the year preparing for a fight with the most feared woman in the sport. It’s an incredibly tough ask for Nunes to go up a division and beat the best female fighter of all-time, and that’s why this writer doesn’t believe it will happen. Which would leave Nunes ready to return to 135-pounds for a title defense in the second half of 2018.

Shevchenko, twice beaten by Nunes already, is currently number one in the UFC’s bantamweight rankings, with Holm and Pena behind her. Both those women are coming off losses, not to mention the impending birth of Pena’s first child putting her out of action for a while.

That leaves number four ranked Raquel Pennington as the obvious choice for Nunes’ next challenger. Pennington is on a run of four consecutive victories, including sending former titleholder Miesha Tate into retirement last time out. She’s the next woman up, but she’d be a relatively straightforward way for Nunes to end a trying year: “And Still.”

If 2017 was the year Cris Cyborg finally announced herself on the sport’s biggest stage, 2018 is likely to be the year she establishes herself as the biggest female MMA star since Ronda Rousey. A superfight with her countrywoman Nunes will headline a big pay-per-view in Brazil, or serve as part of the UFC’s annual International Fight Week. With Cyborg displaying her dominance with a knockout victory.

And while victories over names like Nunes and Holm are all well and good, what the paying public really wants to see is Cyborg taking on a natural featherweight. Step forward Megan Anderson, who’ll be ready to challenge for the belt in the second half of this year.

Anderson is the current Invicta featherweight champion, and has both the looks and the fighting style to be a potential crossover star for the UFC. Unfortunately, her first fight in the promotion will be against the female GOAT, and it’ll be no different to any of Cyborg’s other fights.

Nunes and Anderson are significant tests for a woman who didn’t have enough of them for a long time, but neither fighter will be able to stand up to the power and much-improved fight IQ of the 32-year-old. She’ll end 2018 as she started it, utterly dominant.