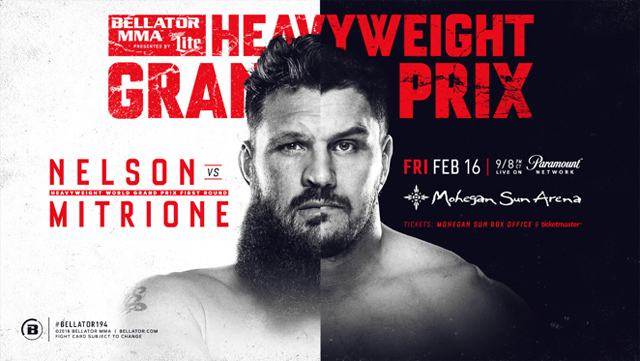 On Friday, February 16, Bellator returns to Connecticut’s Mohegan Sun Arena with the next installment of the heavyweight grand prix. Headlined by a rematch (from their UFC days) between Roy Nelson and Matt Mitrione, the event features five main card bouts, and MMASucka will be inside the building giving up to the moment thoughts and results from press row.

While not a stacked line-up, Bellator 194 does have the selling point of being stop two for the promotion’s heavyweight grand prix. Following-up on Bellator 192’s round one match-up between Quinton Jackson and Chael Sonnen, this event will see Mitrione looking to avenge a 2012 first round TKO loss to his opponent. The big money free agent signing from 2016 is 3-0 inside the Bellator cage, after finishing his UFC stint on a two-fight losing streak.

Nelson is 5-7 since his win over “Meathead,” however many of his losses have been to some of the best heavyweights in the sport. Including UFC Heavyweight Champion Stipe Miocic, Alistair Overeem and Josh Barnett. “Big Country” won his promotional debut, defeating Javy Ayala via unanimous decision.

The co-main event is shaping up to be a lightweight contender eliminator bout. The surging Derek Campos–winner of four straight–takes on Patricky “Pitbull,” a mainstay at the top of the division, and a man also on a winning streak of his own. This fight too is a rematch, as Campos tries to even the score on “Pitbull” from a 2014 TKO loss to the Brazilian.

Also featured on the card is former light heavyweight champion Liam McGeary. The 35-year-old Brit will aim to bounce back from a May 2017 loss to fellow Englishman Linton Vassell as he faces 8-2 Russian prospect Vadim Nemkov.

Rounding out the card is a women’s flyweight bout between former boxing star Heather Hardy and Ana Julaton, as well as a battle between newbie pros Tywan Claxton and Jose Antonio Perez.

The main card will air live on the Paramount Network starting at 9 pm EST. Make sure to check out our arena notes at the bottom for the goings-on from press row throughout the night.

Fight Notes: Workman like effort for Claxton through the first and into the second round. Perez had no real response to the takedowns, top-control, and ground-and-pound of Claxton. Not as exciting as the highlight reel knee in his last fight, but a pretty easy night at the office for the now 2-0 fighter.

Fight Notes: An early overhand by Nemkov in the first really built the moment for the young fighter in the bout. From then on low kicks completely chewed up the front leg of McGeary. Bad enough that the former light heavyweight champion couldn’t stand anymore and referee Dan Mirgliotta mercifully stopped the fight in the third. The audible reactions from the crowd late in the fight were loud as the pity for McGeary was evident.

Fight Notes: Round one looked, pretty much, like two boxers grappling. The boo birds were out early. And then round two resembled a white belt class at a BJJ gym. Round three was a copy of round one with some cheering from the crowd whenever the stalemate grappling stalled on the cage. Mercifully this was only a three round bout.

Winner: “Pitbull” wins via TKO round one.

Fight Notes: Man the “Pitbull” brothers just hit hard. A few minutes of feeling out led to “Pitbull” finding his range and landing a big left hook that put Campos on weak legs. Just like his brother Patricio, Patricky has the killer instinct and quickly finished off the fight midway through the first. Going to be interesting if this gets him another lightweight title shot. Likely has a better chance if Primus retains against Chandler.

Fight Notes: Through the first two rounds Mitrione was very active for a heavyweight and looked in phenomenal shape. Setting a pace very difficult for Nelson to deal with, despite takedowns late in both frames for “Big Country.” However, in the third, Nelson went from looking old at times to looking like old-school “Big Country” with the patented crucifix position making this one very close. One judge saw a draw and it easily could have been after that third.

Thoughts from the arena: