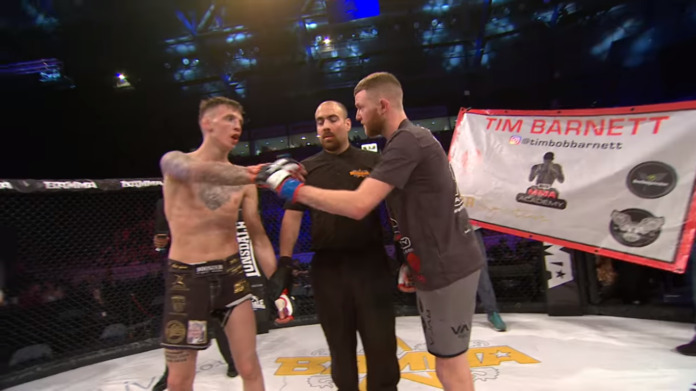 Last week it was announced that BAMMA lightweight title-holder Ryan Scope (11-1) was vacating his championship to sign with Bellator MMA.

It didn’t take long for the UK-based promotion to announce when a new lightweight champion would be crowned.

The previously announced rematch between Tim Barnett and Rhys McKee has moved to the main card of BAMMA’s stacked BAMMA 34 card in London, and the vacant lightweight title will be on the line.

Tim Barnett (5-0) enters the lightweight rematch with five-straight wins all via first-round finish. In February of 2017, Barnett faced Rhys McKee for the Lonsdale British Lightweight Championship. He knocked out Northern Ireland’s McKee in the final seconds of round one. We most recently saw England’s Barnett take out Mario Saeed last May.

Rhys “Skeletor” McKee (6-1-1) enters the biggest fight of his career after a big submission win over Kams Ekpo at BAMMA 33 in December. In late 2016, McKee became the Lonsdale British Lightweight Champion following a quick KO win over Jai Herbert after Marc Diakiese vacated the aforementioned title to sign with the UFC. He lost the title quickly to Barnett before fighting to a majority draw against Richie Smullen in July.

Now they meet for a title yet again, this time the official BAMMA Lightweight Championship. The title has only been held by four men previously; Rob Sinclair, Mansour Barnaoui, Martin Stapleton, and Ryan Scope.

BAMMA 34 will take place on March 9 at the SSE Arena, Wembley. The card will be topped by three title fights.

If you want to check out the first meeting between McKee and Barnett, you can do so right here!