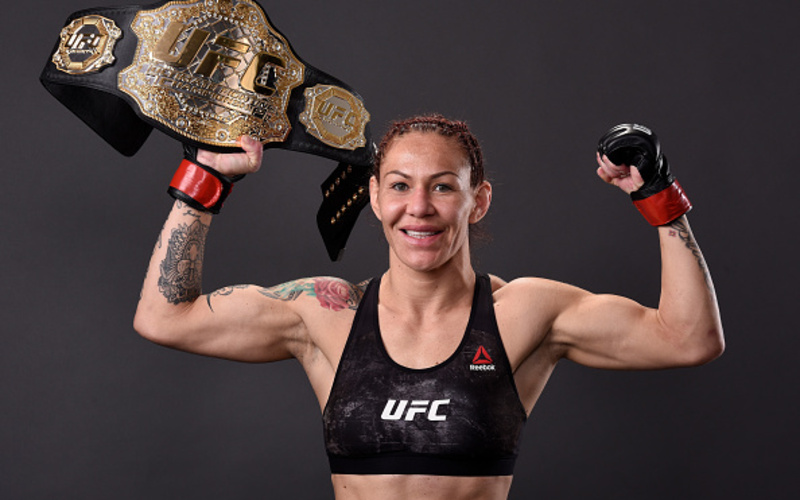 The last week has showcased some exciting MMA fights. Plenty of knockouts, submissions and tightly contested decisions have caught the attention of the MMA world. While those who won celebrate and those who lost go back to the drawing board, fans want to know: what’s next? Armchair Matchmaker takes a look at some potential match-ups that should be made in various promotions.

Hoo boy. A lot happened at UFC 222, Bellator 195 and KSW 42. There’s so much to unpack and digest. Which means there are a lot of potential match-ups to be made next. So let’s dive right into it.

Frankie Edgar was lined up to face Max Holloway at UFC 222 before Holloway pulled out with an injury. Ortega stole Edgar’s shot when he knocked him out in the co-main event. Ortega is now undeniably the No. 1 contender at featherweight, and him vs. Holloway is the only fight to make. And it’ll be good.

Cyborg dominated Kunitskaya en route to retaining her featherweight title. Afterwards, she took to the mic to challenge UFC bantamweight champion Amanda Nunes. Nunes is seemingly the only woman in the UFC who has a chance to beat Cyborg. “The Lioness” appeared slated to defend her title against Pennington at UFC 224. But UFC President Dana White said he wants to make Cyborg vs. Nunes instead. We shall see.

Caldwell made quick work of Leandro Higo in the main event of Bellator 195, submitting him via first round guillotine. He defended his bantamweight crown with the win. Also on the card was Taimanglo taking a split decision victory over long-time contender Joe Warren. Taimanglo is the only man to defeat Caldwell in MMA. The champion got that win back and defeated Eduardo Dantas to take the crown, but he has unfinished business with Taimanglo. The trilogy fight makes the most sense for Caldwell’s next title defense. Michael McDonald is another option.

Vieira took a decision win home against Cat Zingano to kick off the main card of UFC 222. A fight with Reneau makes sense next, as the winner could very well earn a No. 1 contender bout. (Pennington seems to have the next bantamweight title shot locked up). Both women have submission wins over Sara McMann, too.

Edgar was just finished for the first time in his career against Ortega in the UFC 222 co-main event. Where does he go from here? He and Lamas have never met yet, somewhat surprisingly. Lamas was just knocked out in his last fight against Josh Emmett, too. With both coming off a loss, this seems like a good fight to make.

Kunitskaya’s bid for the featherweight title ended with Cyborg getting her hand raised once again. The former Invicta champ has expressed interest in trying to return to bantamweight. If so, she should be met by Correia, who is coming off a KO loss to Holly Holm.

O’Malley got the job done against Andre Soukhamthath despite being on one leg for the majority of the third round. (He was aided by Soukhamthath’s very questionable fight IQ). Regardless, “The Sugar Show” is now 2-0 inside the Octagon. What’s next for the young prospect? A match with Saenz makes sense.

Arlovski made it two straight with a decision win over Stefan Struve on the UFC 222 main card. Tim Johnson is coming off of a win of his own over Marcelo Golm. There’s not much else that makes sense for Arlovski, so, book it.

Dern was able to beat Ashley Yoder late to take a (questionable) split decision after overcoming adversity in round two. Dern was not able to impose her Brazilian Jiu-Jitsu until the final minute or two of the bout, but did enough on the feet to win the first round. She honestly could have benefited from a few more bouts in Invicta FC, but she’s here in the UFC. Alex Chambers needs a win of her own, and this could be a fun fight.

Stamann took a split decision of his own over No. 7-ranked bantamweight Bryan Caraway. Fans saw how sharp Stamann’s takedown defense was when he defended about 19 of 20 of Caraway’s shots. The well-rounded Michigan native showed that he could defeat one of the best grapplers in the weight class. Now it’s time to see if he can beat one of the most powerful strikers in it. No. 6-ranked Lineker seems to be the fight to make. Other viable options: Brian Kelleher, Eddie Wineland, Rob Font.

Archuleta impressed in his Bellator debut with an extremely dominant decision win (there was a 30-23!) over William Joplin. Lahat would be a massive step up from that. While Archuleta is a prospect, he is at the point where he should be tested. Lahat will give him that test.

Williams did enough in the striking department to hold off Emily Ducote in an air-tight split decision. Arteaga may be a step back, but maybe Williams could use one. We saw her beat Heather Hardy and now Ducote, but the second win wasn’t nearly as impressive. Bellator has a very good but raw talent on its hands. Treat her as such.

Note: Fellow MMASucka editor Mike Skytte brings you these match-ups that should be made following KSW 42. You can follow him on Twitter here.

Narkun won the champ vs. champ super-fight against Khalidov in an exciting come-from-behind win. He’ll likely go back to defending his title in his next appearance. On the same card, Martin Zawada took out Lukasz Jurkowski via first-round corner stoppage TKO. He would be a good next opponent for Narkun.

Khalidov couldn’t win the super-fight, but the middleweight champion still has his belt. Askham won in impressive fashion over Michal Materla in the co-main event when he knocked him out in the first round. Khalidov vs. Askham is the fight to make.

Lipski defended her title with a clean unanimous decision win over Silvana Gomez Juarez. “The Violence Queen’s” reign continues. If the KSW were to push her in her next fight, there’s no one better than Rin Nakai for that. It would be a fantastic fight, and the MMA world would get a true gauge of where the developing Lipski really is among the world’s top flyweights.

Gamrot retained his lightweight title with a fourth round submission victory over Grzegorz Szulakowski. That marks his third successful title defense. Redmond would appear an option to be next in line. He’s on a three-fight winning streak with one of those coming in KSW.