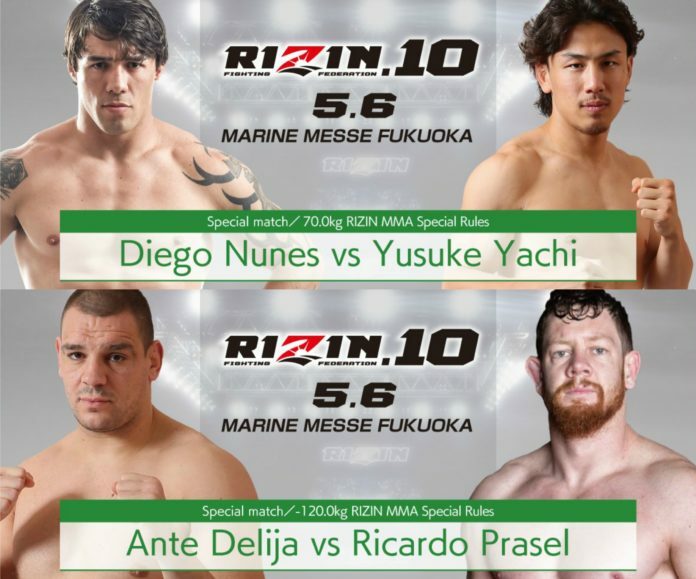 The fights were announced at a RIZIN press conference in Japan.

Brazil’s Nunes (22-7) may not have been on the radar of a vast majority of MMA fans for a while now, but he has been in solid form as of late. Following releases from the UFC as well as Bellator in 2013-2014, Nunes signed with Swedish-based promotion Superior Challenge.

He made his Superior Challenge debut in September of 2014, knocking out veteran Joachim Hansen to claim the vacant featherweight title. Nunes then took two years off before traveling to Russia, losing to the then-undefeated Rasul Mirzaev via unanimous decision at Fight Nights Global 61 in September of 2016. In 2017 he returned, knocking out Radu Mihatu in Italy before picking up two wins in the span of two weeks in December; submitting Michel Ersoy in Superior Challenge and submitting Corneliu Rotaru in Romania’s RXF.

Exciting Japanese fighter; Yusuke Yachi (19-6) has been on a role since signing with RIZIN. A winner of five-straight, the last four all taking place in RIZIN, Yachi made his promotional debut in December of 2016 and starched Mario Sismundo in 15-seconds.

In 2017, the Japanese fan-favorite fought and finished three opponents. Opening up the year with a devastating first-round knockout over UFC-veteran Daron Cruickshank before picking up another stoppage win three months later against Japanese legend Satoru Kitaoka. He then submitted UFC and PRIDE FC legend Takanori Gomi in December of last year.

Ante Delija (14-3) went on an impressive five-fight win streak in the 12-month span between May 2014 and May 2015. Among those five victories are stoppage wins over Ruben Wolf and Valentijn Overeem.

The five-straight wins earned him a shot at M-1 Global heavyweight gold, taking on Marcin Tybura at M-1 Challenge 61. The fight was stopped mid-way through round one, however, following a nasty injury to the leg of Delija. “Walking Trouble”, indeed. That fight took place in September of 2015, however. His first fight back will be nearly three years later vs. Ricardo Prasel as he fights in Japan for the first time in his 17-fight career.

Undefeated Brazilian Ricardo Prasel (9-0) enters his RIZIN debut fresh off winning the Aspera FC heavyweight title last August via 42-second submission. Of his nine wins, eight came via submission – all leglock or choke – while just one came via TKO. The 6’7 grappler is oozing confidence as he heads into his Japanese debut vs. the toughest test of his career.

RIZIN 10 is scheduled to take place on May 6 live from the familiar Marine Messe Fukuoka in Fukuoka, Japan.

The card is beginning to take shape with the addition of these two bouts, joining the previously announced batch.