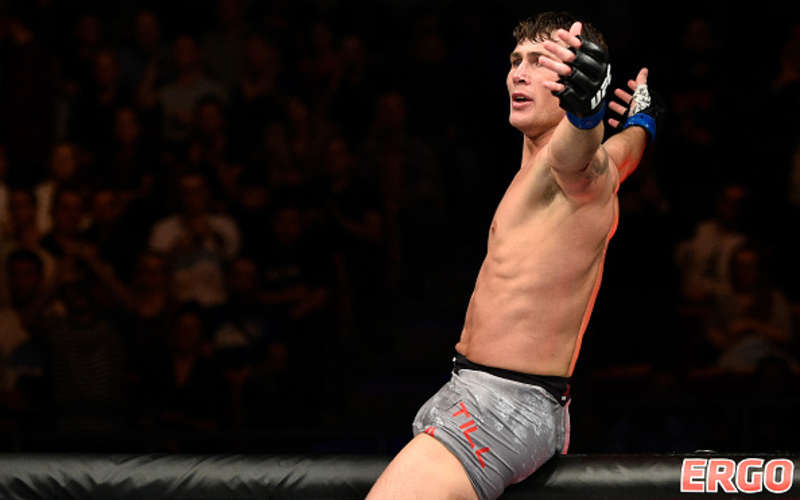 Darren Till is one of the fastest growing stars in the UFC. In an already stacked UFC welterweight division, Till has made his way into the top 10. He is now on the prowl for his next UFC victim. Having missed out on UFC London, which is a UFC Fight Pass card, the door is wide open for Till to make a splash in 2018.

Till is not a quiet fighter by any means, and he is ready to start calling out the rest of the top fighters in the welterweight division. Kicking things off earlier this week, he issued a challenge via MMAfighting.com to Rafael dos Anjos, and retweeted Ariel Helwani‘s tweet for good measure:

He is hoping to get on the UFC 224 card in Rio de Janeiro, and who better to fight than one of the best Brazilians in the UFC.

After a major layoff in 2016, Till rose to fame last year after going 3-0. He defeated Jessin Ayari in May via unanimous decision, Bojan Velickovic in similar fashion, but hit the big time against Donald Cerrone. He finished the UFC veteran via first round KO/TKO, and is still undefeated in the UFC.

The beginning of the end! @DarrenTill2 with the beautiful combination that led to the finish! #UFCGdansk pic.twitter.com/BxGUbNI3W3

Till finds himself in the top 10 of one of the toughest divisions. Despite his age, Tyron Woodley continues to work his way through the division. After a draw against Stephen Thompson, Woodley came back to win what was considered one of the worst fights in UFC history. It was still a victory for the current champ, and now he awaits his next opponent after defeating Demian Maia last July.

With a quiet dos Anjos likely waiting for a higher-ranked fighter, Till needs to think of a Plan B. With a talent-heavy division at 170 pounds, there are some interesting match-ups for the young Brit.

Colby Covington is already on the hunt for a top-five contender, and there is simply no way Dana White puts his two young and charismatic welterweights against each other. Covington has chased Woodley for some time, but has shifted his attention to Thompson for a number one contender fight.

Other Options for Till

Speaking of which, Thompson and Till has the makings of a great technical striking battle. Both fighters have impressive accuracy, and could put on a fight for the ages. Thompson is being selective of who he fights, which is perfectly understandable in today’s game. Jorge Masvidal is currently ranked sixth in the division, and Thompson took care of business against him last November. Till is currently ranked seventh, and has fought just one top 15 fighter in his career.

Maia could be a great or terrible match up for him. If he can outlast the initial burst of the first round, he should be able to strike his way to a decision win, even if he is unable to knockout the Brazilian veteran. Maia continues to push the pressure and reaches in for takedowns. Till is big, fast, and has precision strikes that will certainly keep Maia at bay. This could be the win he needs to get himself in the UFC welterweight title picture. It will also get him a popular name in Brazil to take on at UFC 224.

Robbie Lawler would be an incredible opponent for the 25-year old rising star. Both fighters love to strike, and Lawler’s ability to grow with every round makes for an incredible main event. However, White confirmed in January that Lawler is dealing with an ACL injury after his fight against dos Anjos.

A very realistic option is Masvidal. While it does not get him the top five fighter he hopped, it is another notch on the belt in terms of top 10 fighters. An impressive win would certainly get him in the title picture, too. On top of that, this would be the perfect fight to headline a television card, giving two great strikers five rounds to do battle.

If Till plays his cards right, he could have a massive year. In today’s fight game, waiting is never a good plan, and he may need to shift his focus if he wants to take over in 2018.