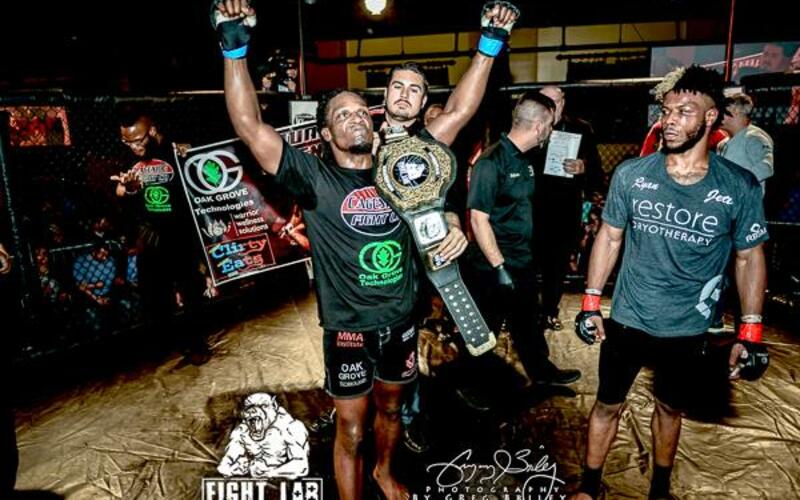 D’Juan Owens (16-11-1) defends his Fight Lab lightweight title on Saturday against Mike Stevens at Fight Lab 58. “Dirty South” said that he’s “in the f***ing zone” leading up to his first ever professional title defense.

2017 capped off a busy year for Owens. He picked up two victories each in MMA, Muay Thai and Jiu-Jitsu competition, going 6-0 in combat sports. It was a much-needed change of pace for Owens, who went 0-2 in MMA in 2016.

He revealed he had an epiphany while on a humanitarian trip to Senegal, Africa back in March 2017.

Owens told MMASucka that he was passing on his MMA knowledge to eager Senegal natives, who affectionally referred to him as a champion in turn. That was before he captured his first professional title, and it stuck with him.

“I almost felt like I didn’t deserve that,” Owens said. “Everyone was incredibly supportive and they were hungry for the knowledge I had access to. When I saw the way people trained and lived, I saw people training all damn day. Six, seven hours. Not getting paid to do it. I was like, ‘This is my JOB.’ It was a wakeup call.”

Some might need a psychic to help them realize what their wake up call is as they feel stuck in one place. There are the best online psychics at Heraldnet that one can trust and consult from the comfort of their homes and seek guidance about their career or anything that concerns their life.

Owens said he thought to himself that if his pupils in Senegal were referring to him as a champion, what was stopping him from becoming one?

“That affected me on a spiritual level and holds me accountable,” he said.

Owens admitted that he wasn’t in the right physical or mental shape when he fought and lost to Lashawn Alcocks in February 2016.

“I was kind of on this BJ Penn mentality that, ‘I’m just going to fight wherever it goes’ as opposed to dictating where it goes,” he said.

Owens then lost to Mark Cherico in September 2016. Cherico went on to earn a spot on the Dana White Tuesday Night Contender Series, a platform that Owens is looking to be featured on. He admitted that Cherico was simply the better fighter at that time.

But Owens said he’s felt drastic improvements since his wake-up call. He said that in the past, he was a good striker with solid takedown defense and Jiu-Jitsu. Now? He says his takedown offense and defense are vastly improved. He’s also taking his nutrition and strength training far more seriously.

He proved it with a 6-0 run in 2017. The payoff came on Dec. 2 of that year. Owens fought Ryan Jett at Fight Lab 57 for the promotion’s lightweight title. He won a unanimous decision and captured his first ever professional MMA title. After three “close-but-no-cigar” failed attempts earlier in his career, winning gold was pretty sweet for Owens.

“You’re not the champ until you defend the belt.”

But now, Owens’ focus is on defending the title against Stevens, who is a former training partner of his. The 32-year-old is confident with the match-up. He feels he’s more well-rounded than Stevens, who Owens said is primarily a Muay Thai fighter. He predicts that he’ll get Stevens to the ground and submit him by round two the latest.

“You know what they say: you’re not the champ until you defend the belt,” Owens said.

If he emerges victorious, Owens said he’s looking to get one more win after that around May. Then, he fully intends to impress Dana White and the UFC brass enough to get his own shot on the UFC president’s Contender Series this summer.

“I don’t give a damn who’s across the cage,” he said. “I’ll absolutely destroy them and get a contract with the UFC.”

This new iteration of himself, the best he’s ever felt in his career, will look to keep the ball rolling this weekend.