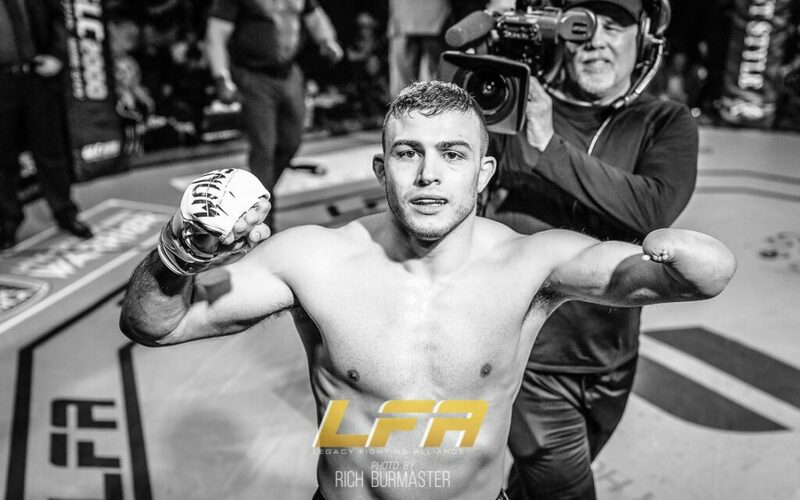 Nick Newell returned emphatically from his retirement last weekend with a submission win over Sonny Luque. It was the main event of LFA 35, and he ended it just over two minutes into the fight. Newell hadn’t fought since October 2015, but took no time in the feeling out process. He retired at age 29 due to recurring injuries throughout his fight camp, but now he’s back and seemingly better than ever.

After the fight, he called for his shot in the UFC.

In 2012, UFC President Dana White said Newell would never be in the UFC due to his condition as a congenital amputee on his left arm.

“It’s hard to fight here with two arms,” he said after a UFC 155 press conference. “It’s tough. I don’t know, fighting with one arm is just craziness to me.”

Those were some of White’s comments on the matter. However, he also once said we’d never see women fight in the UFC. That’s a prime example of how things could change, as there are now four women’s divisions in the UFC. White has proven he is more than capable of a change of heart.

Maybe Newell’s case should change as well. Here is why he should get a chance to prove he can win inside the Octagon.

Those 14 reasons Newell mentioned earlier are the amount of wins he has as a professional mixed martial artist.

He became a world champion in one of those victories. In December 2012, just weeks before White’s comments, Newell captured the XFC 21 lightweight title when he submitted Eric Reynolds in the first round. It took him just 1:22 to lock in a standing rear-naked choke and capture a belt.

The World Series of Fighting took notice after that win and signed Newell, who fought there until his retirement. He went 4-1 under the banner. His lone loss in his career came in a title match against former WSOF lightweight champion Justin Gaethje.

If Newell’s loss to Gaethje gave the UFC another reason not to sign him, they should reconsider. Gaethje has become a force in the UFC lightweight division over the past year, putting on two Fight of the Year candidates against top competition. That gets to my next point.

Respect Among his Peers

Newell has not only proven to fans that he can win inside the cage, he’s proven it to elite fighters like Gaethje. The lightweight took to Twitter to make his own case that the UFC should sign Newell.

“This sport hurts and it is unforgiving, much like some fans and MMA critics,” he tweeted. “[Newell] will get hurt and lose like the rest of us, it will not be because he is lacking in skill or suffering from a disability, but because we are #Gladiators.”

I believe @NotoriousNewell deserves a shot. This sport hurts and it is unforgiving, much like some mma fans and critics. He will get hurt and lose like the the rest of us, it will not be because he is lacking in skill or suffering from a disability but because we are #Gladiators

He’s Not Just Some Can Crusher

Since Newell has faced better competition in 2012, he has continuously proven he has been able to evolve as a fighter and win. His opponents’ records in that span at the time Newell fought them tally to 84-29. Newell has defeated eight of those nine opponents, with the lone loss coming to Gaethje. Zero shame in that.

Reynolds has fought men like UFC welterweight standout Jorge Masvidal and former UFC lightweight champion Eddie Alvarez. Both men submitted Reynolds in the third round of their fights. Newell did it in one. He should at least get a chance to climb the ladder and see what he could against UFC-caliber competition.

Is it because Newell can only fight with one arm and the UFC feels it would be dangerous? He’s already proven he could dominate other fighters despite his condition.

If Newell gets finished or dominated, does the UFC look bad for putting him in the Octagon? To the uneducated fans, perhaps. It honestly wouldn’t be worse than the blow-back they received for giving CM Punk a shot to fight despite him NEVER competing in MMA.

Is it because there’s only room for one “Notorious” in the UFC, with that being Conor McGregor? Perhaps.

In all seriousness, Newell has shown he can not only hold his own, but win in the sport. Not just win; he finishes people. 11 of his 14 wins have come via stoppage.

The UFC could always benefit from signing potential draws. Newell could be that. If the UFC built him up properly, he could turn into an inspiring success story. That wouldn’t just be good for the UFC’s finances, it would benefit fans who need a feel-good story.

Hopefully, viewers would see a Newell UFC stint as less of a gimmick and more as an inspiration.

Whether it happens in a week or it takes Newell a few more wins and another world title, it’s simply something that should happen. Let’s hope it does.