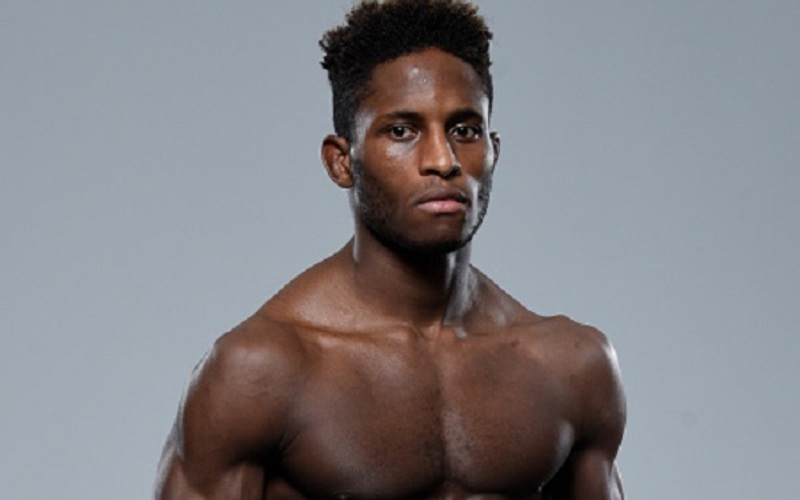 Give it up for the talent scouts at the UFC, they snagged a good one. The fearsome Canadian striker “Mean” Hakeem Dawodu is going to put on a show for the bloodthirsty masses on UFC Fight Pass this weekend.

The second UFC fighter from Calgary since Nick “The Promise” Ring, “Mean” Hakeem has been doing his training at the Straight Blast Gym in Ireland, home of one Conor McGregor. This should play into an already established counter striking game while Dawodu continues to develop a “sprawl and brawl” style.

Although all 8 of his professional fights took place with the former World Series of Fighting (RIP), Dawodu hadn’t received top billing and is relatively difficult to scout. What we do know, is that he has finished six of his seven wins by knockout. Brutal muay thai combinations have led Dawodu to an undefeated record.

A troubled youth, Dawodu was apparently prone to violent outbursts, causing his family to enroll him in kickboxing to channel his anger. These days Dawodu is a perfect gentleman, but his fighting style is still characterized by sudden, violent outbursts.

Although tricky to read, Dawodu consistently leads with single strikes, but counters in combinations. Dawodu is a patient striker, mixing feints and rhythm changes to keep his opponents on a hair trigger. This is a great way to draw counters and reactions that will later set up explosive strike opportunities.

A quick and technical boxer, Dawodu does a great job controlling the exchanges throughout the fight. Sporting a sharp jab, Dawodu is also seen shooting a lead hook to the body fairly often.

Dawodu keeps things slow with out-fighting, picking apart and frustrating his opponents over time. When they do rush in, they may find things aren’t so pleasant in the pocket either.

Still a developing prospect at 26-years-old, Dawodu has faced stiff competition early in his career. All seven of his foes have had winning records, three of whom have only lost to Dawodu. Unknown to many, a tough Dagestan product and talented grappler in Marat Magomedov was able to fight for a majority draw when they first met in 2015. He was put down with punches in the second round after an immediate rematch.

Ultimate Fighter 14 alum and UFC vet Steven Siler was the most experienced and complex opponent of Dawodu’s career. Solid in all areas of the game, Siler made things interesting in the first round by getting a trip takedown and taking the back. Although he absorbed his fair share of hard shots, Siler was actually able to get in his own punches, even seeming to wobble Hakeem later in the round.

The biggest takeaway from this fight is that Dawodu was able to observe the areas Siler was having success, and make adjustments accordingly. On the feet, Dawodu applied pressure and began to lead with straighter punches and a snapping jab.

After the first round, Siler had nothing. Dawodu was nailing lead lefts to the body and landing hard counters off Siler’s kicks. With his strength depleted, Siler’s takedown attempts only put him in more danger, forcing him to clinch up and eat knees.

It was a smart, eye-opening performance by Dawodu.

NEXT FIGHT: vs. Danny Henry at UFC Fight Night 127

If we’re being kind, Scotland’s Danny Henry is an enormous, durable, well-conditioned featherweight who can pose a test for many UFC level fighters.

If we’re being honest, Henry is a fighter who can, and almost certainly will take a hellacious beating. In his debut bout against Daniel Teymur, Henry took every single shot Teymur launched in a brutal first-round assault. Miraculously he survived, Teymur gassed out, and Henry was able to nab a decision.

This card is in the United Kingdom, and Henry hails from Scotland. That’s not exactly a hometown bout, but he’ll draw some views. With that being said, this is just a terrible matchup for Henry and a fantastic showcase for Hakeem Dawodu.

Dawodu is destructive with his combinations and very difficult to hit on the lead. Henry blocked a lot of combinations with his face in his debut. The only logical explanation for this is that the UFC knows eyes will be on this bout for Henry, and many fans will gain accidental exposure to the beautiful violence of Dawodu.

If you want to be among the exposed, Hakeem Dawodu be set to face Danny Henry in the fifth bout of the preliminary portion of the card. Both the prelims and main card will be featured on UFC Fight Pass, so get your subscription in order.