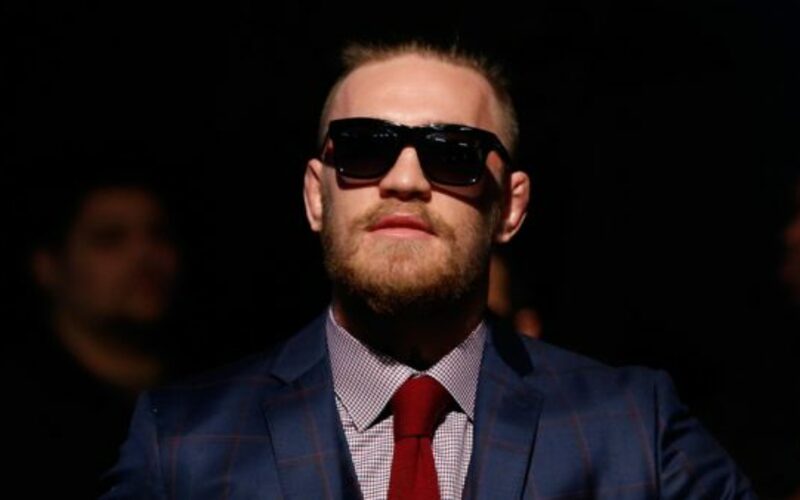 It has been 16 months since Conor McGregor fought in an Octagon and it is still unclear when we can expect his UFC return.

Despite his lengthy absence he continues to dominate the headlines, recently turning heads when he stated that he had offered to fight Frankie Edgar as a short notice replacement for Featherweight Champion Max Holloway at UFC 222.

This triggered a severe reaction from Edgar’s coach, Mark Henry, who claims that the Irishman ducked his fighter three times because he only takes favourable stylistic matchups. He didn’t stop there though, accusing McGregor of being a protected species who “cuts lines to titles”, doesn’t fight the “best” and worst of all, lacks heart and integrity.
Henry’s damning assessment of McGregor’s career and character has been echoed by the Irish star’s many detractors. But is it a fair one? Or are his comments too harsh and perhaps hypocritical?

Henry isn’t alone in feeling that McGregor was gifted UFC title shots. The Irishman was scheduled to fight Featherweight King Jose Aldo at Edgar’s expense, despite his toughest opponent to date being the #5 ranked Dustin Poirier.

Edgar, 34, had submitted fellow title hopeful Cub Swanson (Ranked #2) and was a former Lightweight champion with far more experience against elite level fighters. However, he had already fought Aldo for the title at UFC 156 and fallen short.

Aldo had cleaned out the featherweight division, repeatedly dismantling fighters whose greatest strength was their wrestling, much like Edgar. McGregor, 27, was a young contender who presented a fresh challenge, a big southpaw that used unique angles and timing in his striking and had a string of impressive knockouts under his belt.

Add in the hype that McGregor brought to the table and it is easy to see why he got the nod over Edgar. Was Edgar more deserving? Probably. But in prize fighting title shots are rarely determined by the rankings.

Henry should know this as his protégé was given a title shot after two consecutive (albeit contentious) losses. After losing his Lightweight title and the subsequent rematch to Benson Henderson, Edgar moved down to Featherweight for an immediate title fight against Aldo.

The New Jersey native made a name for himself by capturing the lightweight belt despite being constantly outsized and this was a super-fight the public was eager to see. Fair or not, other deserving Featherweight contenders would have to wait for their chance.

It is also hard to deny that McGregor was gifted a Lightweight title shot as he had not faced any of the division’s top contenders. His first scheduled title shot was somewhat justifiable given his dominant victory over the pound for pound #1 (Aldo) at the time.

McGregor’s loss to Diaz later damaged his Lightweight credentials. However, his star power, combined with his ability to avenge his only UFC defeat, made another championship fight inevitable.
Gifts? Perhaps. But no less justifiable than Edgar’s first crack at featherweight glory. McGregor was not the first fighter to receive a questionable title shot and he certainly won’t be the last. Bisping vs Henderson II springs to mind.

The quality of McGregor’s opponents has always been questioned. As his star grew, so too did the perception that the UFC was protecting its golden goose from the toughest wrestlers in his division. Henry agrees, stating that McGregor doesn’t fight the “best” and hand-picks stylistically favourable opponents.

So has McGregor always taken the easiest path to UFC glory?

When Jose Aldo pulled out of UFC 189 with a broken rib, the Irish star could easily have sat out and waited for the Brazilian to recover, especially given he was injured himself. Instead, he accepted a short notice (two weeks) fight against the #1 contender in the division and worse, an opponent that many felt was his kryptonite- a high level wrestler.

McGregor’s title hopes weren’t the only thing on the line against Chad Mendes, his entire career hung in the balance. After all the hype and perceived favouritism, he would have been labelled a joke if he had lost to “Mini Mendes” and his aura of invincibility and marketability would have been seriously (and perhaps permanently) dented.

Some claimed that he was running from Edgar, but the Irishman had repeatedly stated that he intended to move up to Lightweight long before he was even in the title frame at featherweight.

If Mendes and Edgar were bad stylistic matchups for McGregor, Dos Anjos was an awful one. He was another excellent wrestler and grappler who possessed brutal leg kicks. He also had a size advantage over the Irish star, cutting weight from as high as 200 pounds.

The UFC’s biggest star risked it all again when the Lightweight Champion withdrew from UFC 196 with a broken foot, fighting Nate Diaz on short notice. Again, the safe option would have been to wait for the champion to recover. Lose to Diaz and his dreams of UFC history would be up in flames.

A gutsy move that ultimately did not pay off.

Henry states that McGregor was full of excuses after this loss. In reality, he received widespread praise and new fans for his graciousness in defeat.

Although Diaz humiliated McGregor in front of millions on short notice, the Irishman’s fighting spirit was again evident when he pushed for an immediate rematch. Surely there is no tougher matchup for a fighter than someone who has already beaten them, finishing them in the 2nd round no less. History shows that immediate rematches rarely end well for the losing fighter.

McGregor also showed plenty of integrity in taking these fights. He didn’t just live up to his fight anyone, anywhere persona- he also made sure that he didn’t let his fans down. He knew that the Irish fans that launched him to stardom had spent thousands on flights to America and that if he walked from these events, they would have been extremely disappointed.

For someone with just 10 UFC fights, McGregor has faced many elite level fighters. He holds wins over Holloway, Poirier, Mendes, Aldo and Alvarez. He was also scheduled to face Dos Anjos, a UFC champion ranked #4 pound for pound at the time.

As you can see, McGregor’s opponents were far from mugs and he defeated all of them within 2 rounds with the exception of Diaz and Holloway.
As for Henry’s claims that McGregor consciously ducked Frankie Edgar. We will never really know if this is true or if McGregor really offered to step in at UFC 222.
But is it realistic to suggest that a fighter with such incredible self-belief, a history of taking huge risks and so many notches on his belt, fears anyone?

Whether he will fight the winner of Ferguson vs Nurmegamedov in his return fight is another question.

One thing is clear though, we all hope to see Conor McGregor back in the Octagon sooner rather than later.

Ciaran is a freelance writer and MMA fanatic based in Melbourne, Australia. He has a background in Criminology (MSc University of Oxford) and experience in writing reports for major government bodies and journal articles on key social issues. He is now using these skills to pursue his passion for sportswriting.