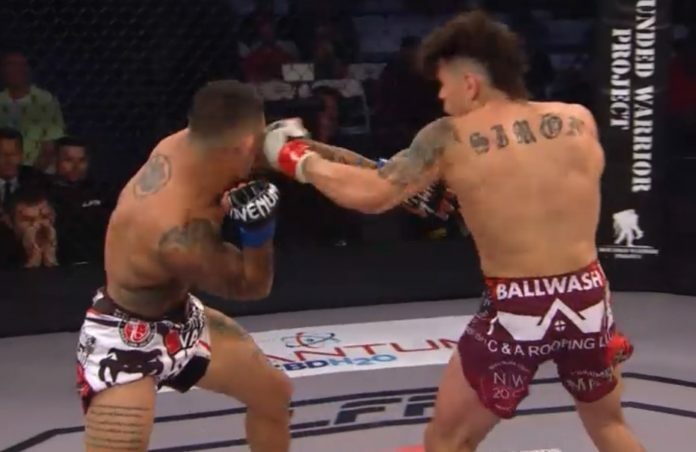 LFA 36 was live tonight at the Morongo Casino Resort & Spa in Cabazon, California.

On paper, the card was a sure-to-be-fun one, but after the fact, it is safe to say it exceeded expectations on all fronts.

Simon is looking to make the first defense of his bantamweight title after winning the strap following a fantastic showing against UFC-veteran Chico Camus last year.

Zani put the pressure on the champion early, not wary of Simon’s striking at all. That was a mistake.

Ricky Simon doubled up on the left-hand, going once to the body before stunning Zani with a left-hook to the temple immediately after. The Brazilian was on wobbly legs and Simon immediately started to hunt him down, landing bombs on Zani along the fence for the knockout win 60-seconds into round one.

Ricky Simon improves to 12-1, wins his fifth-straight, and almost certainly punches his ticket to either the UFC or Bellator MMA. He joins good competition with Thomas Almeida and Patricio Pitbull as the only men to knock out the very tough Vinicius Zani.

Winless since September of 2015, Faria was picked apart on the feet from bell to bell by a constantly one-step-ahead Emmers.

The finishing blow came in the form of a right-hand in round three, dropping a bloody Faria to the canvas before Emmers began to rain down with even more punches, forcing the stoppage.

Former RFA title-challenger Emmers improves to 13-3 and is a winner of his last four.

.@PrettyBoyEmmers ends it in fashion!

Aguilera outboxed the Brazilian early but made the mistake of throwing a kick at Seixas, allowing him to get an easy takedown. The final minutes of round one were spent with Seixas on the back of Aguilera, who was very aware of Seixas’ knack to lock in nasty armlocks.

After being sliced open with a few decent elbows to the side of the head in round one, Aguilera brought the fire in round two. The 26-year-old welterweight landed a devastating uppercut to put the Brazilian out cold before he even hit the ground.

Aguilera improved to 11-4, picking up his third-straight highlight reel finish in 2018 alone.

Despite taking the fight on short-notice, Andre Ewell came out and began to light Meaux up on the feet. The 5’11 bantamweight put his fantastic hands and killer kicks to good use and stopped Trent Meaux early.

The fight-ending blow would come via vicious uppercut after a flurry of straights, hooks, and headkicks had Meaux moving backward to avoid the strikes.

Apex MMA’s Ewell improved to a stellar 12-4, winning his third-straight.

Alacabek entered the contest after putting in some work at Blackhouse MMA in California, Noriega also fights out of California, training at Joe Stevenson’s Cobra Kai.

Alacabek entered the contest primarily known for his wrestling and top control, but he and Noriega brawled it out on the feet for just over two minutes before Alacabek folded him with a knee to the liver to end the fight.

The 6’2 light heavyweight prospect improves to 4-0 with 4 finishes.

Up next we had a featherweight contest between the always tough regional scene veteran Tommy Aaron and Cub Swanson protege Troy Guerrero.

People had high expectations for this fight, but Tommy Aaron began to out-grapple Guerrero early. Despite multiple blatant fence grabs from Troy Guerrero, “The Spaniard” got the fight to the mat in due time and forced the tap with a deep rear naked choke at 4:15 of round one.

The AXS Fights and Bellator MMA veteran Aaron improves to 6-3 and puts on the best performance of his career thus far.

The opening fight of the AXS TV broadcast was a light heavyweight contest between the man with the quickest KO in LFA/LFC/RFA history, Taylor Johnson, as he took on former bodybuilder; Corey Turner.

Johnson quickly got the takedown of his own and he immediately started throwing bombs at Turner who had no answer. The fight was stopped just 35-seconds into round one.

It wasn’t quite the 8-second KO he got in his LFA debut, but “Tombstone” wins his second-straight under the LFA banner with yet another quick finish. He improves to 3-0 as a professional.

LFA and AXS Fights, in general, have been the proving ground for some of the best fighters in the world today.

It is almost a guarantee that multiple fighters from this show alone will be making waves in the UFC and Bellator MMA within the next 12 months. LFA never disappoints, and they put on a hell of a show tonight.