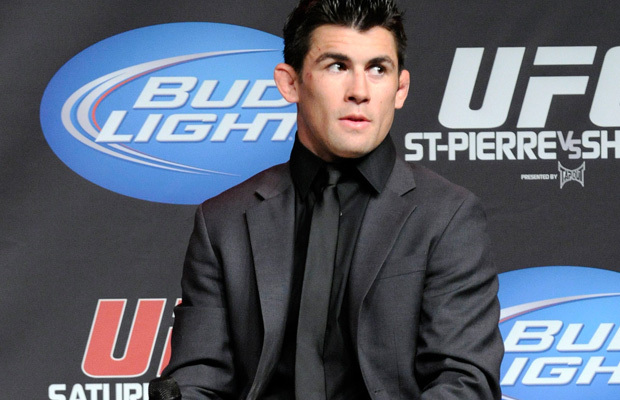 TJ Dillashaw was hoping for a dream dream fight with Demetrious Johnson. However that fight is off after Dana White confirmed that the flyweight king needs more time to recover from shoulder surgery.

Dillashaw campaigned for the fight for months, believing that a win over the pound for pound #1 would seal his place among MMA’s all-time greats.

What would a win over Johnson do for Dillashaw’s legacy?

Johnson is widely regarded as the most complete fighter in the sport, recently defending his title for a record 11th consecutive time. Dethroning “Mighty Mouse” and adding the flyweight belt to his collection would certainly boost Dillashaw’s stock, but it’s hard to say how much.

Dominant champions generally prove their pound for pound credentials by moving up in weight to show that they can also beat bigger fighters. As incredible as Johnson is, Dillashaw clearly outsizes him and as a champion from a heavier weight class, would generally be expected to beat him. So what exactly would a win over “Mighty Mouse” prove? The flyweight champion would have much more to gain than Dillashaw.

Dillashaw regained the bantamweight title with an impressive knockout victory over Cody Garbrandt, but he hasn’t exactly cleaned out the division.

He will be disappointed to lose the big super-fight (at least for now), but a rematch with Dominick Cruz may be the legacy-building fight that Dillashaw has been craving all along.

After defending his new title against Urijah Faber at UFC 132 (avenging his only loss to date) and Demetrious Johnson in October, 2011, Cruz had effectively cleaned out the division, holding wins over virtually all of the top contenders- Joseph Benavidez (twice), Brian Bowles, Urijah Faber, Demetrious Johnson, Scott Jorgensen and Ian McCall.
He seemed set for a long reign at the top of the division until serious injuries cruelly robbed him of his prime years.

Cruz was set to defend his title against Urijah Faber in a highly anticipated trilogy fight, but was forced to withdraw with a torn ACL in May, 2012. In December, 2012, he had a second ACL surgery after his knee rejected the cadaver ligament used to repair the injury.

During his layoff, Renan Barao became the UFC’s interim bantamweight champion and Cruz was set to return for a unification bout with the Brazilian at UFC 169, when he suffered groin tear a month before the fight. After 2 years and 7 months of inactivity, the UFC was forced to strip him of his title, making Barao the new undisputed bantamweight champion.

At this point it was fair to question if Cruz would ever fight again. If he did, would he ever be the same? His body had broken down and it was hard to see how a fighter whose style was so dependent on his unorthodox footwork and movement could bounce back from such crippling injuries.

In September, 2014, after almost 3 years outside of the octagon, Cruz sent shockwaves through the division with a first-round knockout of #6 ranked Takeya Mizugaki at UFC 178.

His stunning return earned him an immediate title shot against the Champion, TJ Dillashaw, but questions remained about his physical condition after a lengthy absence and just 61-seconds back in the cage.

Surely he was finished? How could he ever be the same fighter? And how could he possibly expect to compete with the best in the division, let alone Dillashaw, after his body had deteriorated so much? Even if he had been healthy during his absence, ring rust alone would surely be his undoing?

In contrast, Dillashaw was hailed as the future of the division, drawing many comparisons with Cruz himself. Many experts said that he was an upgrade on “the dominator”, a similar but more complete version of the former champion.

Again, Cruz’s body proved to be his greatest enemy as he was forced to withdraw from the fight with a torn ACL in his other knee, in December, 2014.

The injury sidelined him throughout 2015, but once he had recovered he again set his sights on the champion instead of taking a “tune-up” fight to dust off the cobwebs and see how his body would hold up.

Cruz does the unthinkable

On January 17, 2016, Cruz did the unthinkable, overthrowing the Bantamweight King and #4 pound for pound at UFC Fight Night 81.

From start to finish, he fought at a high pace and his defence and striking efficiency were exceptional. Cruz stayed out of danger, bamboozling Dillashaw with his movement, making him miss all night and landing a high percentage of his own strikes and takedowns. A casual observer would never have suspected that he had not fought a full round inside the octagon in almost 5 years. His performance defied logic and was undoubtedly one of the greatest comebacks in sport.

What is even more extraordinary is who he did this against- Dillashaw was young, in his physical prime, had been active and looked unstoppable. Still, he couldn’t find a way to beat “the dominator”.

Cruz was certainly not the same fighter he was in 2011. Any expert will tell you that the injuries he continually suffered would end most professional athletes’ careers.
So how did he pull it off? The only plausible answer is that Dominick Cruz was just that good. He was so much better than the competition that even after all of his injuries and time away from the sport, he was still good enough to beat the world’s best.

The greats often find a way to win even when they are way past their prime or the odds are stacked against them. Manny Pacquaio, for example, is still able to compete with world-class boxers despite being 39 years old and taking significant damage over a long career. Why? Because “his C-game, is better than most fighters’ A-game”, as boxing analyst Timothy Bradley puts it.

MMA evolved at a rapid pace during Cruz’s absence (2012-2016), with new strategies, skills, training and strength and conditioning methods being perfected around the world. Cruz was so far ahead of his time that even though he had been out for so long, he was still the man.

Impact of the fight on both fighters

This fight alone significantly boosts Cruz’s claims to all-time greatness and seriously dents Dillashaw’s. How could Dillashaw claim to be the greatest bantamweight, let alone pound for pound, if he couldn’t beat Cruz despite all of the physical advantages he held over him?
It was certainly a close fight and some feel that Dillashaw did enough to scrape a win. The fight statistics (see fight metric http://fightmetric.com/fight-details/c4938baf92d2dc31) favour Cruz, but even if you believe that Dillashaw won, there is no doubt that it was a razor-close fight. If Dillashaw is the greatest bantamweight of all time, should his fight with a diminished version of Dominick Cruz really have been that competitive?

Dillashaw is an exceptional fighter with plenty of good years ahead of him. He also has an impressive resume with dominant wins over Renan Barao (twice) and Cody Garbrandt as well as some of the division’s top contenders- #2 Lineker and #3 Assuncao.

That’s a solid start on the road to greatness, but his loss to Cruz is a major asterisk against his legacy. Beating “the dominator” in a rematch would be a good way to erase it, but considering everything that Cruz has achieved against the odds, that won’t be easy.