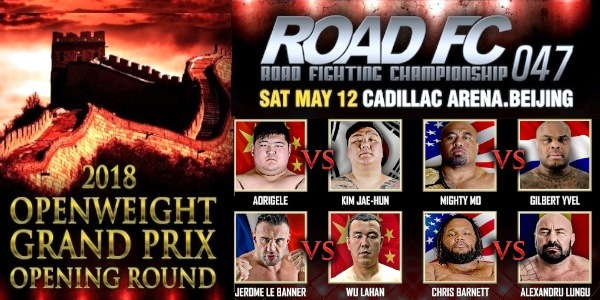 ROAD Fighting Championship has announced that ROAD FC 047 will take place at the 20,000-seat Cadillac Arena in Beijing, China on May 12, 2018. The opening round of the inaugural 8-man 2018 Openweight Grand Prix will be held and the matches are now set.

Jerome Le Banner (Chakuriki Gym) of France is a decorated kickboxer with a 25-year chain of championships and tournaments totaling to an impressive record of 81-22-1. Although he started in judo as a boy, it was the impression of Bruce Lee which set him into the striking arts. Then from 1990 to 2015, Le Banner succeeded in winning title after title in Muay Thai, kickboxing and K-1 rules, including multiple ISKA championships and K-1 World Grand Prix tournaments.

Wu Lahan (Tianjin Jitianlong) is a 196cm giant from China who has the right mix of striking and grappling prowess. He has been a National Sanda champ three years running, but he counts submission finishes on his MMA record. In the new Ganryujimapromotion, he became known on the international scene. Wu’s debut in ROAD FC was a dominant performance that showcased exactly what he’s capable of. He will make a commendable addition to representing China’s new MMA strength.

Chris “Beastboy” Barnett (Barnett Taekwondo Academy) is one of the most exciting heavyweights in action today. He comes from a family of Taekwondo practitioners and brings exactly those kicking skills into the cage. Barnett achieved dominance in Island Fights then launched his career in Asia with bouts in IGF and Rizin, so the ROAD FC Grand Prix is right up his alley. He ended 2017 with a strong beatdown of wrestler Shim Gun-Oh at ROAD FC 045 and will keep that momentum going.

Aorigele (Xindu Martial Arts) is a solid 6-1 in the ROAD FC cage, most recently finishing Japanese legend Kazuyuki Fujita. At just 23-years-old, Aorigele will look to solidify himself as a super heavyweight to look out for with his inclusion in the upcoming openweight grand-prix. All six of his pro wins come via (T)KO, including wins over Fujita, Yusuke Kawaguchi, and Bob Sapp.

Kim Jae-Hun (Team Korea) steps up as the definite dark horse in the tournament. Kim’s performances have been brawling nailbiters that see him rushing out of the corner for a war, but seeing the opposition’s flag raised instead. His last match against kickboxer-turned-MMA reality star Heo Jae-Hyuk looked to be the turning point in his favor with a one-sided thrashing until a slip let his opponent claim the last minute victory. Kim will be the underdog but expect nothing less than his all.

ROAD FC Openweight Champion Mighty Mo (Team Mighty Mo) is a two-time K1 Grand-Prix winner, and he’s also fought in DREAM and Bellator throughout his career. He made his ROAD FC debut in 2015 with a resounding 37-second KO over PRIDE veteran Choi Mu-Bae. He then entered the first ROAD FC Openweight Tournament. Defeating Choi again via TKO, submitting Myung Hyun-Man, and stopping Hong Man Choi in the finals to be crowned champion. Since then, he has defended the strap two times.

Gilbert Yvel (Mike’s Gym) of the Netherlands is a mixed martial artist with over 20 years of professional bouts. His start in the historic RINGS promotion during its early years saw him earn victories over Valentijn Overeem and Semmy Schilt. He then went on to PRIDE where he defeated Gary Goodridge, lost to Vitor Belfort and Igor Vovchanchyn, and cemented his nasty reputation with an eye gouge DQ against Don Frye. He has also famously fought in the UFC, It’s Showtime, M-1, K-1, Cage Rage, Affliction, and RFA.