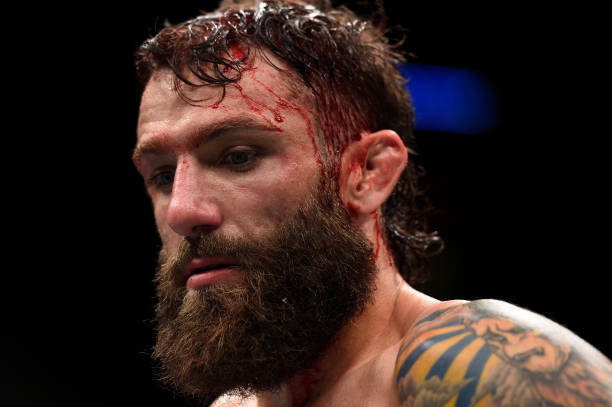 Michael Chiesa still plans to fight this Saturday on UFC 223 despite being taken to a hospital after suffering multiple cuts to his face.

Chiesa was injured when Conor McGregor arrived at the UFC 223 media day unannounced and threw a chair through a van window that had fighters present. Chiesa received multiple cuts to the face and was sent to a hospital, putting his fight with Anthony Pettis on Saturday in danger.

Michael Chiesa will fight at UFC 223

Chiesa has since been released from the hospital, where he was cleared to fight on Saturday as planned. Strawweight champion Rose Namajunas was also close to the window and was apparently shook-up by the whole ordeal. Artem Lobov (a teammate of McGregor) has been pulled from the card on Saturday due to his involvement.

McGregor was looking for Khabib Nurmagomedov, who faces Max Holloway this Saturday. This follows a confrontation the day before between Nurmagomedov and Lobov. It was also announced that Khabib will be fighting on Saturday for the undisputed title meaning McGregor will be stripped. A warrant for McGregor’s arrest has since been issued with UFC President Dana White describing the situation as “criminal, disgusting, despicable”.

UFC 223 takes place this Saturday on April 7th at the Barclays Center in Brooklyn, New York.

Chiesa is coming into this fight after his loss to Kevin Lee, which was surrounded in controversy due to the stoppage. Chiesa will be looking to jump right back up the rankings with a win over former lightweight champion Anthony Pettis, who is coming off of a loss to Dustin Poirer, where he suffered a rib injury in the 3rd round; causing the fight to be stopped.