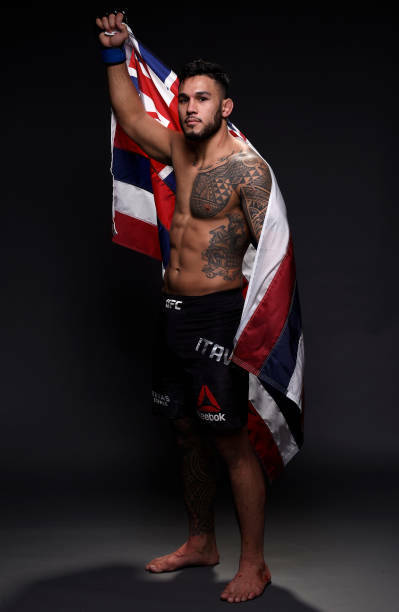 Hawaii’s Brad Tavares (16-4 MMA, 11-4 UFC) may well be a darkhorse in the UFC middleweight division. Nearly eight years into his UFC career, Tavares seems to be hitting his stride at 30 years old. The well-rounded Ray Sefo trained kickboxer is riding a three-fight winning streak, and is now ranked #15 by the UFC.

Despite a marketable appearance, genuinely kind personality, and massive Twitter following, Tavares has not received the love he deserves from the larger promotional machine.

A few months back, UFC veteran Norman Parke was selling a lot of his fight gear to fans. After accepting several hundred dollars for a pair of gloves, Parke did not hold up his end of the deal with “Lord Honky Humungus.”

After the failed trade became more publicized, the homie Brad Tavares came to the rescue.

Yo honky. I’m not sure what the gloves were for or what the significance were to you, but if you send me a box or envelope with return postage I’ll send you my gloves from UFC 203. No joke, no bs. They’re nothing special but if you want um

Tavares is a hell of a guy and is clearly great to his fans. “No joke, no BS.” A consummate professional, Brad has had no scandals marring his career. He has never missed weight, he very rarely withdraws due to injury, and always gives 100% in the cage.

After a 5-0 start to his career, Tavares won his elimination fight to join team Chuck Liddell on the 11th season of The Ultimate Fighter. At the time he was a dangerous, scrappy brawler. He put it simply, “fighting is fun.” Tavares was matched up with Jordan Smith, who was 14-0 at the time against strong competition. It didn’t last long.

Since then, Tavares has defeated the likes of Lorenz Larkin, Nate Marquardt, Elias Theodorou, and Thales Leites. However, his only finish in his 11 official UFC wins was over MMA pioneer Phil Baroni in 2011.

After an early career defeat to experienced wrestler Aaron Simpson, the only real blemish on his record is an upset knockout loss to the crafty and dangerous Tim Boetsch. The other two losses for Tavares came to the two best middleweights in the world; Robert Whittaker, and Yoel Romero. Tavares is in elite company with “Jacare” Souza, as they are the only two decision victories Romero holds in the UFC.

Mastery of the Basics

Brad Tavares has always been a fun, aggressive fighter. Early on in his career, his strikes were wider, and his chin was high. Everything was a bit sloppier, a product of his inexperience. Brad has been around so long now we sometimes forget, he debuted in the UFC at just 21 years old.

Tavares is rooted in the basics of a more Dutch kickboxing style, no doubt influenced by “Sugar” Ray Sefo and his training partners at Xtreme Couture in Las Vegas. He works consistently behind a long jab, a sharp left hook and chopping low kicks.

Tavares is also particularly strong in the clinch, making him extremely difficult to take down and move in the cage. This clinch proficiency opens up a lot of opportunities for Tavares to land hard strikes when exiting tie-ups.

He’s the kind of athlete that seems heavy and planted into the ground, but will suddenly spring into the air like a cat and knee you in the face.

Some fans may shy away from revisiting his fights due to the time commitment, but Tavares really is a pleasure to watch work.

Former middleweight title challenger Thales Leites has been a revelation in his second UFC stint, making a run to contention and only losing to highly ranked fighters. For Tavares, he represented a gatekeeper to a three-fight winning streak and a spot in the top 15.

Leites is strongest in the top position on the ground, but has shown dangerous, powerful striking. He is known to respond with fierce hooking flurries and possesses heavy low kicks.

Quite frankly, Leites was dominated. As a clinch based takedown artist, he had no success in luring Tavares into a grappling match. Brad displayed outstanding hips time and time again, keeping the fight standing.

Leites was picked apart with a snapping jab, busted up with hard shots off clinch breaks, and pulverized by low kicks. When the dust settled, Tavares was awarded a lopsided 30-26 decision.

NEXT FIGHT: vs. Krzysztof Jotko at UFC on FOX 29

With solid positional grappling and effective striking, Jotko has become a consistent threat to middleweights everywhere.

He was thoroughly outpacing the dangerous Uriah Hall before he was caught with his hands down and chin out. One clean shot and he was sparked out in the second round.

Tavares will have to be on his A-game. While his striking is much tighter and his takedown defense is solid, Jotko is always a knockout threat. Patience in the clinch will be key, as Jotko can establish control and win rounds if given the opportunity.

Ultimately this matchup is an opportunity for Brad to show off his skill set and move up in the rankings. Coming off two straight losses, Jotko will do whatever it takes to find success. You can catch Brad Tavares on Saturday, April 14th kicking off the Fox Sports 1 preliminary card for UFC on FOX 29.