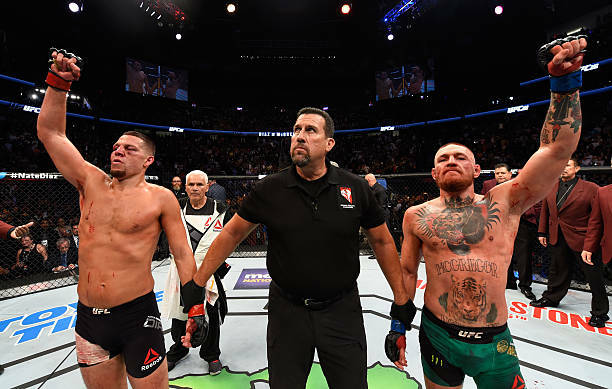 There has been a lot of speculation as to whether or not the UFC will ever create a 165 pound weight class. Many fighters have expressed interest in a 165 pound division, and it’s not a bad idea. One fighter who has spoken out about it multiple times recently is current lightweight, Kevin Lee. If the division were to emerge, it could create some very interesting match-ups between current lightweights and welterweights. If the UFC were to do so, 165 would be the ninth men’s division.

UFC Welterweights That Could Move Down

Throughout Masvidal’s career, “Gamebred” has fought in both the welterweight and lightweight divisions. He’s gone back and forth between the two divisions, seeing success in both of them. In fact, he came close to fighting for the UFC welterweight title when he entered his bout with Demian Maia at UFC 211. 165 could very well be his best weight class as it’s right between the two he’s been competing in throughout his career. His MMA career has seen three catchweight fights at 160, in those fights, he finished two while winning the other by a decision.

Here’s another guy that has bounced around between lightweight and welterweight. Cerrone has had plenty of success in both classes, coming very close to titles in each. He challenged once for the lightweight title and came close to contending in the welterweight division before losing to Masvidal.

After a long career at lightweight, Cowboy decided to move up in weight and fight at 170. Early on he found success, until losing three straight in 2017. After his most recent victory against Yancy Medeiros, he claimed he wanted to move down to lightweight once again. He also mentioned post-fight that he’d love if the UFC made a 165 pound division, as he feels he’s too small for welterweight and the cut to lightweight is a bit too much.

ICYMI – After he got knocked down in #UFCAustin's headliner, @ymedeiros quickly got back up and had a message for @Cowboycerrone: "You, mother-cker!" They both got a laugh. Full story: https://t.co/N2o51gpLUq pic.twitter.com/BDs4tO8r5W

Rafael dos Anjos hasn’t talked about any interest in a 165 pound division, but he would be an excellent addition to the weight class. Dos Anjos spent his whole career at lightweight, eventually taking the title from Anthony Pettis. A two fight skid prompted “RDA” to move up in weight. After announcing his move to 170, he revealed that he was cutting a ‘massive’ amount of weight to get to 155.

Since moving to welterweight, he has looked excellent with wins over Tarec Saffiedine, Neil Magny, and former welterweight champion, Robbie Lawler. As a result of this incredible win streak, he’s been given the opportunity to challenge for the interim title at UFC 225 in June against Colby Covington. You can imagine how good dos Anjos would look if he were to cut right between the two weight classes he’s spent his entire career at.

Georges St-Pierre spent his whole career at welterweight. Most recently, “GSP” moved up to middleweight to fight for the title against Michael Bisping at UFC 217. After that fight, everyone wanted to see GSP vs. Conor McGregor. There’s a lot to like about that intriguing match-up. If the fight were to happen, many believe that it would be for the first 165 pound title. Both fighters have had a lot of success in the UFC and it would make for an exciting fight. The problem is that no one really knows if GSP will be returning after his victory over Bisping.

UFC Lightweights That Could Move Up

Kevin Lee has already made it very clear that he wants the UFC to open up a 165 pound division. Lee is a lightweight that cuts a lot of weight to reach the limit. Before his last fight at UFC 216, he weighed in overweight, but was given extra time and eventually made weight.

After the fight, he told Chael Sonnen on his You’re Welcome Podcast that he didn’t “even know how I got it off. I don’t know where I was. Your mind just doesn’t want to work when you’re in those kind of states”. Lee said that it was the worst weight cut he had ever had. He also claimed he felt as if he were going to die during the process.

He also said in another interview with MMAJunkie that he could see a 165 pound division being opened soon. Lee believes that with the number of fighters in the lightweight and welterweight classes, they could easily fill it up.

Nate Diaz is yet another fighter that has spent time at both lightweight and welterweight during his career. Much like Cerrone, he’s found success at both weights, but he’s never held a UFC title. Diaz is also another fighter who has been open to the idea of fighting at 165. He told ESPN’s Brett Okamoto that he’d be interested in fighting McGregor again at 165 instead of going down to 155. If the weight class were to be opened, Diaz would definitely have the tools to become a champion.

Conor McGregor has fought at three different weight classes in the UFC. He started out at featherweight, winning the title. Conor went on to fight at welterweight against Nate Diaz, twice. He then went on to fight at lightweight, becoming champion after defeating Eddie Alvarez at UFC 205. McGregor is a sizeable lightweight, as he has to cut a good amount of weight in order to reach 155. At 165, he wouldn’t be too heavy or too small, fitting right in between. And if the class were to be made, he would almost certainly be apart of the inaugural title fight.

Conor has also mentioned a 165 pound division according to Frankie Edgar‘s manager, Ali Abdelaziz. McGregor apparently made himself an option against Frankie Edgar at UFC 222 after Max Holloway‘s injury. But according to Edgar’s manager, McGregor wanted the fight to be at 165 instead of 145 or 155.

When conor called the ufc he asked them create a 165lb belt. He thinks @danawhite was born yesterday. This is fact. Waiting for response Mr. Helwani. #BeefIsReal