Dustin Poirier Happy With Performance but has Plenty to Work On 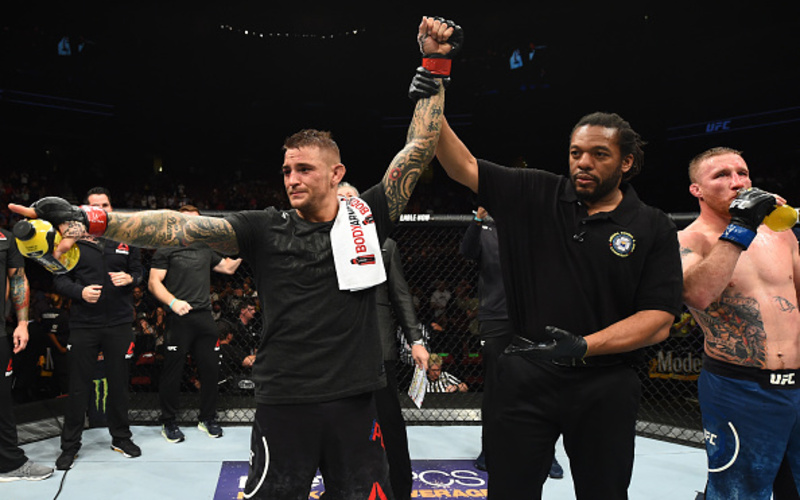 UFC lightweight contender Dustin Poirier was pleased with his performance against Justin Gaethje at UFC on FOX 29, but says he still has plenty to work on.

“I’m proud of myself, I made a couple of mistakes in there, but I stuck to the game-plan and used my jab and used my footwork,” Poirier told reporters at the event’s post-fight press conference.

However, Poirier said his body took far too much punishment against No. 6-ranked Gaethje who landed a number of hard inside leg kicks that visibly affected his movement.

“My leg’s pretty busted up,” Poirier said. “I got hit with a couple of leg kicks that I didn’t want to get hit with, more than a couple, but I’m growing and I’m still learning and I felt like I fought a good fight,” he says.

Poirier says he knew that Gaethje would throw a lot of leg kicks after watching his previous fights. “The Diamond” said he had developed a strategy to counter them.

“Thiago Alves, before we walked out there, he said, ‘when he gets too happy with that leg kick lets plant and throw something down the middle,’ and that’s what we did,” Poirier said.

“But I took too many of them even if that was the plan to sit down and take shots, I need to absorb them better or change my angle to where they’re not flush and lifting my body off balance,” he said.

“The Diamond” said in the build-up to the fight that he wanted to add more discipline to his game and avoid getting drawn into wild brawls.

He says he managed to do that for most of the fight. Although he did get drawn into a few exchanges with “The Highlight.”

“There were flashes of the brawling style that I don’t want to do, but I felt like I was disciplined behind my jab, doubling up on my jab, trying to set up a cross on my jab,” he said.

“I threw a lot of looping shots, which I didn’t want to do, but I was trying to go around his guard and get him behind the ear, and I don’t want to do that. I want to be a bit cleaner, but I’m living and learning and I’m getting better every time,” Poirier said.

The Louisiana native admitted that he was badly hurt in the third round when Gaethje landed a big right hook.

“Yeah I didn’t see the shot, I don’t know if he looped the shot or if he over-handed it. I think it hit me behind my left ear or somewhere on my left-side,” he says.

“So I backed myself up to the cage, which is something you don’t want to do against a guy like that, especially when they hurt you and he hit me with another elbow while I was on the cage and I circled out and started jabbing again,” according to Poirier.

“I felt like I got my wheels under me pretty quick and you know, got back to the gameplan, started throwing jabs to the body and head,” says Poirier.

“I knew I was going to have to dig deep.”

Although he made some mistakes Poirier says he can take a lot of positives from his performance.

“I knew I was going to have to dig deep,” he said. “I knew trouble would present itself, but I just stayed tough and believed in myself and we got it done,” he says.

Poirier was happy with his cardio, although he had concerns about how his body would hold up.

“My legs, I was worried about. Another round and a half on the back of that was kind of in my head, but my muscle endurance and my cardio felt incredible,” Poirier says.

Poirier felt all of the hard work he put into his training camp, particularly his boxing, paid off.

“My camp was a lot of boxing,” he said. “We added some extra days of boxing, some extra footwork days, a lot of hard bag-work for muscle endurance and for punching power. I boxed a lot. I boxed and wrestled this whole camp.”

“We’re still starting. I’m a better boxer than I showed tonight, I made a lot of mistakes and I’ve got to tighten some things up.”

He said Gaethje made a lot of mistakes in the fight that he was able to exploit.

“I felt like he wasn’t extending and snapping down on his punches. He was kind of arm-punching and not extending his arm all the way, so he was not even getting his full reach out of it and his full pop,” he says.

“Besides the one I didn’t see, he really didn’t hurt me with any punches at all. He was a little slow, he’s very flat-footed, but he puts everything on every punch,” according to Poirier.

“I felt like I started running away with it when he started lunging off balance to pot-shot me and try to counter me. I felt like when he did land there wasn’t anything on it,” Poirier said.

“After a few exchanges I felt like, ‘yeah, I’m going to take this guy out,’” he said.

Poirier feels he’s ready for a title shot against Khabib Nurmagomedov for his next fight. Before that happens, he’ll make improvements in the areas he feels he needs to.

Ciaran is a freelance writer and MMA fanatic based in Melbourne, Australia. He has a background in Criminology (MSc University of Oxford) and experience in writing reports for major government bodies and journal articles on key social issues. He is now using these skills to pursue his passion for sportswriting.